Dominic Ongwen made a confused impression in the fishbowl of a courtroom at the International Criminal Court in The Hague recently. From behind the bulletproof glass a grandstand full of white people spied upon the 40-year-old Ugandan, a rebel leader who  for most of his existence led a wild life in the African bush.  Ongwen listened uncomfortable to the charges against him – heavy crimes of which he himself was a victim.

Perpetrator and victim at the same time. Shortly after his arrest mid-December in the Central African Republic the former child soldier who became a senior commander in the Lord’s Resistance Army (LRA) had said: “I went to the bush as a blind and deaf person. It is the same way I have come. I am now like a new born child, who you cannot blame for doing anything wrong. I am like a mad man now.

The LRA has been the most murderous rebel group in Africa over the past half century. But also the Ugandan government soldiers committed atrocities. Maybe that’s why nowhere on the continent such fiery debate rages about what to do with perpetrators and victims. What judicial system can alleviate the trauma’s caused by this brutal and bizarre war that took place first in northern Uganda and later fanned out over the Democratic Republic of Congo, South Sudan and the Central African Republic? Does peace sometimes contradict with justice, punishment with reconciliation? Do the West and Africa fundamentally entertain different conceptions of justice?

In 2005, the International Criminal Court issued arrest warrants against five leaders of the LRA. Of those five LRA leaders Joseph Kony is still on the run. Three others were killed by him or died during fighting. The ICC formulated three counts of crimes against humanity and four counts of war crimes against Ongwen. These accusations are connected to a massacre on May 19, 2004 of more than fifty people in the hamlet of Lukodi in northern Uganda.

In the shadow under the roof of the grocery store in Lukodi all men shake their head resolutely. They say: No, Ongwen should never be released, he must for ever be locked up in The Hague for his committed sins. “At six o’clock in the afternoon the attack began. The LRA fighters shouted and shot,” says the old man Gibson Ogot. “They killed one of my sons. I saw how they threw a child into the fire. Ongwen is a monster.”

From intercepted radio contact between the attackers in Lukodi and the Altar, the command centre of the LRA, it appears that although Ongwen did not lead the attack, he played a major role in it. 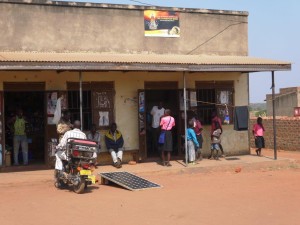 The grocery store in Lukodi

The LRA became notorious for the recruitment of child soldiers. These are forced to kill other children who tried to escape. Through hard labour, special rituals and the usual 250 lashes they are taught to forget their relatives. After the assassination of their character, they appear so disoriented that murdering becomes easy. Without fear they maim civilians by cutting their lips and noses.

A year after the attack on Lukodi, David, another son of the old man Gibson, was kidnapped by Ongwen. “I came home from work in our field when he kidnapped me and my two brothers. After a week walking through the bush I begged Ongwen to let my two brothers go. He exploded with rage. “You never come home anymore, never again, only in your dreams,” he shouted and tied me to a tree. He worked on me with a machete and hit me many times with a sugar cane. I could only pas bloody urine. I saw how he killed abducted children. Every day he had to kill, not because he was told to, but because it gave him pleasure.”

After four years David managed to escape. He cannot forgive Ongwen: “He was not trying to escape, not at all. In contrary, he enjoyed his position.”

Because of the chronic political violence ​​Uganda was called “the sick child of Africa” when the LRA was founded around 1987. Yoweri Museveni coming from the southwest had in 1986 fought himself a way to power in the capital Kampala. His victory marked the end of a long period in which the northern presidents Idi Amin and Milton Obote were in control.

The northern Acholi tribe got furious with president Museveni because of the large scale theft of livestock and other depredations by his government soldiers. That led to an extraordinary event: military leaders possessed by spirits began an uprising against Museveni. First there were the thousands of half-naked and with oil anointed warriors of the Holy Spirit Movement. They were followed by the LRA of the former altar boy and herbalist Joseph Kony. In the war waged by the LRA between 1987 and 2005, an estimated 100,000 northerners perished, around 2 million civilians were displaced and 60,000 children were abducted by the LRA.

Julanda Aoyo sits near the village of Corom on a mat and peels matoke, cooking banana’s . She is the sister of Ongwen.”That poor boy” she brings out as she looks at a newspaper photograph of him in The Hague. Ongwen was, in his own words, born in 1975 in “the season of the white ants”, a delicacy among the Acholi. The LRA abducted him in 1988, when he was 14.

“As a small boy he behaved obedient and disciplined. And he kept crying when his mother died,” says his sister. According to her his mother died of ‘poisoning’ (read: after a family argument), the LRA killed his father after his abduction. The look of Julanda is chained to the picture with the handsome man, who has like her a dimple on the forehead and the same falling eyelids. With her hands she beats her heart hard: “He was kidnapped, it was not his fault. Forgive him. He is so sweet.”

Her plea for forgiveness resonates in many places in the homeland of the Acholi’s. After Ongwen’s arrest a group of religious and traditional leaders in the regional capital Gulu issued a statement calling for him not to get “double punishment” and to send him to northern Uganda for ritual cleansing.

In an audience with David Onen, the supreme chief of the Acholi, one hears the same refrain. “A court case In The Hague is just cosmetic,” says Onen. “Court proceedings in The Hague will not help us in any way to handle war trauma. In our traditional system we know of no jail, only reconciliation and compensation is important. Many Acholi harbour ill feelings and a trial in distant the Hague prevents that this pain disappears. This can only be done through a confrontation between perpetrator and victim. When they’re done with him in The Hague, he should come here and tell his stories.”

The traditional way to judge criminals in Acholi is not with courts and dungeons, but with elaborate ceremonies in which one admits responsibility and reimbursement is arranged. One such purification rite is called mato oput, where perpetrator and victim drink a bitter juice and step on eggs. The egg symbolizes the innocence of a child and pressing it with bare feet, the perpetrator returns to his early youth when he knew no evil. Stories are told, for hours, for days.

How much this traditional system meant to deal with ordinary crimes can help with dealing with war crimes committed in several countries remains to be seen. Also according to sceptics, this traditional justice system was seriously eroded when during the war 80 % of the Acholi’s languished in camps for the displaced.

Telling stories, typical of oral cultures, will be absent at the upcoming trial in The Hague. Wafula Oguttu, opposition leader in parliament in the capital Kampala says. “We in Uganda need a truth commission, a forum where anyone can tell his story,” he says. “In Uganda politics and killings have always gone hand in hand. In that respect president Museveni is also a murderer. “Therefore, Oguttu argues against a court trial of Ongwen. “He was kidnapped as a teenager and forced to execute friends. He accumulated trauma’s which made him to start murdering himself.”

On several occasions talking to the LRA was seen as a solution. Mediators, religious leaders and even Kony’s mother went to the bush to meet the ICC indicted leaders. A failed attempt to make peace led in 2000 to the declaration of an amnesty law, under which about 13,000 LRA fighters were rehabilitated. Between 2006 and 2008 the government of South Sudan mediated, but the International Criminal Court worked against such a mediated peace and although an agreement was reached, it was never signed.

Human rights activist Michael Otim participated in this peace talks in the jungle. “After I had come to know Joseph Kony and Dominic Ongwen well, I lost the hope that reconciliation can be the way out,” he says. “Ongwen was a hardliner and Kony feels superior to everyone. He sees the ICC as a court for the weak. He will never hand himself in alive.”

Because of Ongwen’s courage and his numerous killings, Kony had started to treat him as his confidant. After the LRA was ousted by the army in northern Uganda, Ongwen also became a feared man in the Congo, where he massacred hundreds of churchgoers during the Christmas season of 2008.

A quarrel between the two men made Kony and Ongwen eventually to split. Kony leads a LRA of only a few hundred men, mostly consisting of close relatives. The terrorist movement still operates in the Congo and the Central African Republic. Kony regularly finds refuge in Sudan, a country that has been using the LRA for a long time as a tool against Museveni.

Last December Kony summoned Ongwen because he suspected him that he wanted to defect. He tortured him for a week. “I could only pas bloody urine,” said Ongwen after he had managed to escape. “Each of us sin in words, deeds and thoughts. Each of us sin in different ways. If I committed a crime through war, I am sorry. In my mind, I thought war was the best thing. Even up to now, I dream about war every night.”

The case of Dominic Ongwen was provisionally scheduled for 24 August 2015.