“Hello mate,” writes Matt in an email. “Welcome! You can come back to the Sleeping Camel. I’ve decided to stay open. Because the UN has arrived in Mali the hotel is full again “. Matt, the Australian manager of a cheap hotel for backpackers in Bamako is filled with optimism once more.

After the capture of northern Mali by Muslim extremists from North Africa last year, the tourism sector died in one stroke. No traveller, not even the adventurer riding on a motorbike through the Sahara, comes to a land of terror groups and crumbling government authority.

After the French intervention against the Islamic radicals in January, a manager of a large hotel had predicted to me: “First will come the journalists, then follow the hordes of aid workers until finally the United Nations will arrive and take over. And that will mean a much better business than tourists”.

In November 2011, Sjaak Rijke, a Dutchman, stayed at the Sleeping Camel. A few days later he travelled north and was kidnapped in Timbuktu, together with two other foreigners. The train driver from Woerden remains in captivity up till today. A group of white Africans now occupies some rooms at the Sleeping Camel. They work with a private company hired by the United Nations to remove landmines. “We come from Rhodesia”, says one of them standing under a huge painting of a classic hippie whose artistic brains are exploding all over the wall.

The UN appropriated as their headquarters the Hotel Amitié. It is a fashionable hotel, built with money from the lynched Libyan leader Gaddafi. It is situated right next to the French Embassy in Bamako, the country that really calls the shots in Mali. Amitié is a fortress. “A few suicide vests will not be sufficient for an attack here,” jokes an employee who has come to fetch me at the gate, “only a truck full of explosives can blow us up”. An angry UN employee in the lobby says to a colleague: “Ban Ki-moon welcomes in a statement the elections, and at the same time calls for the establishment of a national reconciliation commission. Does he not know that such a committee already exists?”

The north of Mali is hardly freed from the extremists, the rainy season makes roads impassable and the Muslim fasting month of Ramadan makes everyone dizzy and lazy. But France demanded elections. Despite the bad timing the enthusiasm for this election is remarkably high. Posters are pasted everywhere, on walls and also on public monuments. “Vote for me, for the honour of Mali “, shouts a poster from the belly of a giant hippo with “Mali, our pride” written on its buttocks.

Life proceeds at a lower pace during Ramadan. The food kiosks are closed in the morning, and blaring from car radios in the traffic jams are unctuous sermons of imams. The street vendors peddling USB sticks and dates move lazily between the rows of roaring motorised tins. Street children with white spots on their hair, depicting acute malnourishment, however have something to celebrate. Every believer should give alms to them during Ramadan.

Bamako is a friendly city but also dirty with heavy atmospheric pollution. Mopeds abound everywhere emitting poisonous exhaust fumes which cause severe irritation to the vocal cords. Moped riders who have covered their mouths with rags against the blue smoke, squeeze through the narrow streets along French colonial buildings. They roar down a street  well known as currency  exchange market, where dealers carrying wads of banknotes hustle after passersby; or ride through the street which is smeared with viscous greasy engine oil where mechanics are tinkering with very old Mercedes.

They accelerate on the wide street where the ministries are situated. Attractively built in Moorish style and the yellow of the Sahara, another beautiful gift from Gaddafi, the buildings overlook the mighty Niger whose  banks are flooded with upstream water of a good rainy season. It was in this brown water that the faithful travel mate of the Scottish surgeon and explorer Mungo Park was grabbed and dragged away by a crocodile around the town of Segou. That was 217 years ago. (There is today in Segou, a crocodile in a cage to commemorate this event)  Park, looking for the bizarre course of the Niger, had to flee Islamic slave traders from the north. In 1806 he died under still unclear circumstances, downstream, far beyond Timbuktu. 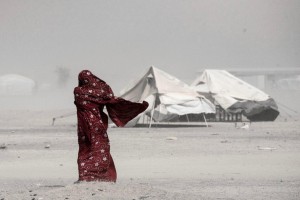 No easy solution for a divided Mali Proud ladies in expensive, colourful costumes ride on mopeds through the blue smoke hanging above the streets of the Malian capital Bamako. The perky presence... Conservative islam is on the rise in poor Mali The mosquitoes in the car do not observe Ramadan and eagerly attack when we drive away from the Malian capital Bamako in the early morning.... Mali: If the music dies… Mali finds itself in a political paralysis. A rebellion, an islamist uprising, a coup-d'etat: within mere months a seemingly stable country collapses under unresolved issues.... Touareg, scapegoats of Mali’s misery Mohamed Moctar is packing his belongings. There is not much is his room besides a sleeping mat, a blanket, a small sound system, a teapot,... Mali conflicts undermine economic growth Horses, cars, donkey carts, motorbikes and pedestrians compete with one another over the limited space on the narrow quay of Mopti. Market stalls, lining the...