Horses, cars, donkey carts, motorbikes and pedestrians compete with one another over the limited space on the narrow quay of Mopti. Market stalls, lining the quay and overlooking the small harbour on the Niger River, offer mainly unrefined salt in hefty slices or smaller chunks. Previously the product was transported on camel caravans to Mopti from the north of Mali; nowadays it’s by four-wheel drive. The town is an ancient trading post on the dividing line between north and south of Mali.

“The salt is extracted in the region of Kidal and transported here via Timbuktu,” says seller Kalilou Kassambara.  His family has for generations been involved in the salt trade for both human and animal use. “I am happy with the business. It helps feed my family and send the children to school.” 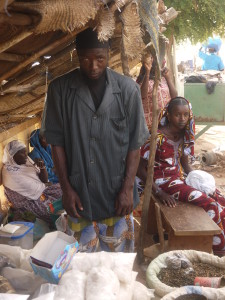 Last year he worried about his trade after rebels of the Tuareg people started a rebellion and occupied parts of the north, only to be pushed out again by three different groups of Islamic extremists.  French troops intervened in January and chased the militants out. “The salt comes from the northern areas where Tuaregs live and they are the ones that transport it to Mopti. Miraculously the trading was hardly interrupted by the conflict. However, the price doubled since then,” says the salt seller.

In 2011, Mali’s economy experienced a healthy upward trend. However the conflict last year damaged the growth and the country registered a decline of 1.5 percent.  It could have been worse but for the export of gold which increased by 9 percent, and cotton by 14 percent.  Both products are Mali’s main sources of income.  They come from the wealthier and more populated south of the country that was less affected by the chaos in the north. This year, a growth of over five percent is expected, partly due to the more than three billion Euros which the international community has pledged to the country to help it back on track. But Mali still belongs to the group of poorest countries in the world. In Mopti every white person is seen as a tourist. A seller of music videos even jumped on a motorbike to race after a car with foreigners in a desperate attempt to sell something. The town was one of the main attractions for tourism in the country. Visitors came by car or through the bush up to Mopti, and boarded one of the boats in the harbour for a slow journey to the famous city of Timbuktu.

The long wooden passenger boats are now bobbing on the water unutilised because the tourists have not returned. The security leaves much to be desired. Tourism, for many Malians a source of livelihood, got the biggest economic blow. The income from tourism declined by approximately 40 percent.

Ten years ago the Dutch woman Marja Oostwoud, together with her Malian partner, opened Tara Africa Tours. The agency now barely operates, and both partners had to seek other sources of income while awaiting the return of tourists. “Until 2008 the sector was on the rise but then the kidnapping of foreigners started in neighbouring Algeria and Niger. That led to a travel warning for Timbuktu. In 2011 it all went horribly wrong when foreigners were abducted in Timbuktu”, says Oostwoud.

She is now considering organizing trips to neighbouring countries for employees of the 12,600 strong UN peacekeeping mission which got recently deployed to Mali.

The arrival of the UN brings some relief in the tourism sector. The mission needs cars and rental firms are starting up again.  Large luxury hotels are fully occupied by UN representatives who work and live there. Unemployed tourist guides, who mostly had gone away to their ancestral home in the   countryside, returned to the capital Bamako to get hired as translators for the UN.

However, some 70 percent of the labour force works in agriculture.  On the fields at the outskirts of Mopti, groups of people, young and old, are working with hoes and ox ploughs on the meagre land. A tractor is rarely seen and fertilizer is an unattainable luxury. Farmers hardly get enough yields from the fields to feed their own family.

The rainy season was supposed to start in June. But the showers have been insufficient especially in the already dry north. “Far too little rain,” complains farmer Adama Traore. “I am afraid we will once again be plagued by a drought”.

The World Bank is expanding its activities in Mali, and wants to focus on agriculture to help the development of the country. “Agriculture here is almost entirely dependent on rainfall,” concludes Cheikh Diop, economist at the World Bank in Mali. “Irrigation mechanisms need to be urgently installed so that the food supply of 15 million Malians is not entirely dependent on the changeable climate.”

Mali: If the music dies… Mali finds itself in a political paralysis. A rebellion, an islamist uprising, a coup-d'etat: within mere months a seemingly stable country collapses under unresolved issues.... Touareg, scapegoats of Mali’s misery Mohamed Moctar is packing his belongings. There is not much is his room besides a sleeping mat, a blanket, a small sound system, a teapot,... From Mungo Park to the UN invasion of Mali “Hello mate,” writes Matt in an email. “Welcome! You can come back to the Sleeping Camel. I’ve decided to stay open. Because the UN has... Conservative islam is on the rise in poor Mali The mosquitoes in the car do not observe Ramadan and eagerly attack when we drive away from the Malian capital Bamako in the early morning.... The Challenges of Retaking Northern Mali Once considered Africa’s flagship of democracy, Mali has turned into a shipwreck of anarchy seemingly overnight....