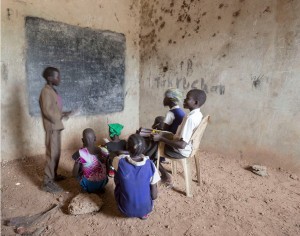 Game Dock had run out of school exercise books for his students some months ago.  He is a teacher at a village school in Pilieny. “Can you miss a few leaves from your notebook,” begs one boy. The children are seated in the rubble remains of their looted primary school, trying to remember everything they learn by heart. “God created paradise” is written on the blackboard. “That was a lesson befóre the outbreak of the war in southern Sudan,” laughs Game scornfully, “Now I do not have any chalk to write with.”

Every sign of development is lacking in this harsh habitat of the Nuer, the second largest tribe in South Sudan. On the sun-baked plains around the swamp of the Nile there is no asphalt, no electricity, and no water. In a heat wave of over 40 degrees a strong wind rages over the bending reeds, the crumbling stone buildings, the wrecked four-wheel drive cars, and whistles through the windows of the school.

This is the situation in the north of South Sudan, less than four years after the independence of the country. The new war had driven teacher Game Dock back to his hometown. He had always dreamt of going to college at the University of Juba. But when in December 2013 a dormant power conflict between President Salva Kiir and his former vice president Riëk Machar erupted, he had to flee the southern Sudanese capital.  Dinka soldiers loyal to President Kiir killed thousands of Nuers, the population group to which vice-president Riëk belongs.

The events of December 2013 opened a new phase in the tribal violence that for decades had South Sudan in its grip. From 1983, the South Sudanese waged a war of independence against the Arabized northerners in present-day North Sudan. Until the peace accord in 2005, there were an estimated two million victims. Even then most victims were a result of the deadly quarrels within the Southern Sudanese independence movement itself.

In that fratricidal struggle the current rebel leader Riëk Machar played a leading role. I first met him some twenty-five years ago. He was sitting under a tree smoking a cigarette, surrounded by numerous lanky bodyguards of his Nuer tribe. He sat on the only wooden folding chair in the whole village of Pilieny. There was peace in the area under his control, but so also was a medieval poverty. “Under the rule of Riëk children from my village went to school for the first time, although only in their bare buttocks and in the open shade under a mango tree,” Game Dock recalls. “We all longed so much for a future with education.”

After the 2005 peace deal South Sudanese spontaneously built hundreds of schools, hungry for knowledge after thirty years of war. “But because of the battle between Dinka’s and Nuers we have gone back to prehistoric times,” says Game Dock.

I notice that compared to my first visit in 1989 the children these days no longer wear torn shirts but spot on a rich diversity of T-shirts bearing the emblems of English football clubs, or the South Sudanese flag. But most still walk barefoot. In the shops one can expect soap as in the old days, and buy soft drinks, but at a formidable price because traders have to trek for days with cargo on their heads, navigating through hostile and swampy territory. The mobile telephone mast, which at peace time became a symbol of better times, no longer functions.

Loitering under a fig tree a few hundred meters from the school are a handful of Riëks soldiers, some sitting around a school bench. Game Dock points to the group of tall men, each more than two meters tall. “You see that long one there? That is Samuel Ngundeng, military administrator of Pilieny”. Then his voice drops to the level of confidentiality: “Our leaders have forgotten the people; they started this new war against our will. Soldiers operate by commands, citizens are used to debate. That is the problem of South Sudan. What can we citizens do against it?”

Samuel Ngundeng explains why all civilian drivers were replaced. “We need strong military leaders, because this war is going to last long.”

He began fighting in 1984 in the Sudan People’s Liberation Army (SPLA), and then he became a government soldier in 2005, but fled his barracks in Juba at the end of 2013 to join Riëks rebel army. That rebel army now recruits throughout Nuerland – sometimes by conscription.

A boy of less than fourteen years takes a nap under a tree, supporting his rifle on his neck.  Also underage youth have to go under arms, on both the government and the rebel side. Samuel Ngundeng shows the new uniform of the rebel army, which are many shades darker than that of the armed forces of Salva Kiir. “So there is no confusion on the battlefield,” he says.

Two hours walk from Pilieny along a path over the parched black earth lays Leer, the hometown of Riëk Machar. Near this district capital a few new high thatched houses are being erected.  After the devastation and killing more than a year ago, the population now feels a little safe, although the government army is less than a hundred kilometres away.

The power struggle by the end of 2013 started a cycle of violence. Nuers soldiers who felt cornered  in the army, and thousands of youthful tribal fighters joined Riëk.  These unruly warriors destroyed the town of Bor, an important town in Dinkaland, followed by the towns of Bentiu and Malakal which also went up in flames.  In February 2014 a retaliatory attack was launched on the town of Leer, Riëks birthplace, by government forces. They even damaged the grave of his British wife Emma McClune.

First came the warriors of a movement affiliated to Salva Kiir, the Justice and Equality Movement (Jem). This is a resistance group from Northern Sudan, with strong Muslim fundamentalist leanings. “We thought that priests and nuns would be safeguarded. Because the war with the Muslim North Sudan is over and most South Sudanese are Christians”, says a church leader with a sour face. “The Jem fighters wearing turbans on their heads shot indiscrimately at all citizens. Women, children, elderly, nuns, priests, we all came under fire from machine guns and heavy artillery. They spared no one. Therefore, we all ran to the marshes of the Nile for safety “.

Under tall trees, on which fish eagles fight over a prey, the Dutch section of Medecins sans frontieres has been running a basic hospital for 27 years, the only one in the wide area. In the courtyard of the dingy buildings rests what could be saved: a delivery table and some crutches. Patients lie on mattresses on the floor. The attackers ransacked the hospital and set it ablaze. They did the same with the two churches of Leer, the compounds of foreign aid organizations, shops, and the few stone houses.

Putting Leer into ashes is part of the strategy of a scorched earth, a tactic applied in the present war even more than before when the SPLA did not control many big towns.  Saadi Yoak is a nurse, he checks children with severe malnutrition in the partially rebuilt hospital. “In the view of the attackers to destroy a hospital makes no sense,” he says as he rubs his face that looks even more gaunt because of the tattoos. “We are Nuers and no one should take care of us.” 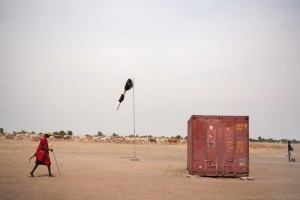 After the evacuation of expatriates by plane was completed, Saadi Yoak on his thongs, accompanied by fifty patients, and taking along with him loads of supply of medical drips and tablets, made for the swamps under a hail of bullets.  During the liberation war against North Sudan, he had walked hundreds of kilometres for months. “But this was the worst trip of my life,” he says.

His patients began dying due to shortage of food. More sick people, many who had been raped, joined his group. His own wife was pregnant with twins. “It became more and more difficult to take care of the sick.  We ate water lilies every day, for three long months. With leeches between my legs, snakes in the floating vegetation and mosquitoes in the night. It was a horror.”

Saadi Yoak is over fifty years old; he has a life of war behind him. The 30 year long battle with North Sudan was tough for him, but the enemy only fought to enter towns. “The difference is that the supporters of President Salva Kiir also roam the countryside to destroy people and their existence.  A war, in which civilians are targeted, is a tribal war. “

For over three months he lived on many different islands in the Nile, each time fleeing his pursuers with his patients. After two months the fighters of Riëk had recaptured Leer. Rebel commander Peter Keah Jak is now the highest administrator there. With vultures diving around him he saunters to his office over a field full of filthy waste.  Expectantly he always beats a look on his cell phone. Does he have a solution? The commander slides a plastic garden chair behind the table next to an empty bookcase in his office. “President Kiir has lost the legitimacy to govern us after the massacres in Juba. We have to live apart from the Dinka. And we are not tired of war”, he says angrily. “Since the beginning of our ancestors the Nuers were never defeated by the Dinka.”

Children of a choir assemble at a little church of Leer. The spiral of hatred and revenge seems endless. “South Sudanese are traumatized, from high to low,” a pastor sighs while rehearsing his sermon for the following day. “Fighting seems the only way to get that trauma out of the way.” In the background the choir begins its rehearsals. “Tomorrow in church everyone will hear my beautiful words. But nobody listens. The healing can only begin when people once again have hope for a future. “ The Nile around Leer

All colour pictures by Petterik Wiggers. All black white pictures taken in 1991 by Koert Lindijer 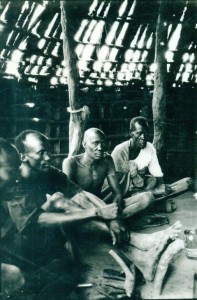 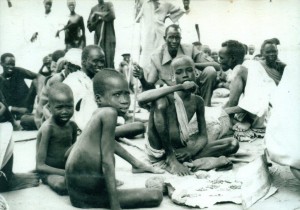 ‘Lost boys’ of Sudan may not have been so lost “We were not lost, we were led by SPLM adults. The expression ‘lost boys’ is bullshit.”... Deep rooted historic schism fuels the fighting in South Sudan Monday 18th of July: After the serious fighting that took place around the fifth independence anniversary of South Sudan on the 9th of July some... Once again War destroys dreams in South Sudan Juba, – Kon Kelei and Tong Akot returned three years ago from the Diaspora, full of optimism, back to South Sudan. They had fled as... South Sudan: Mediocre fighters from the guerrilla crush their new state Mediocre guerrilla leaders from the liberation war are destroying their new state South Sudan... South Sudan: extremely poor or ridiculously rich Surrounded by a series of blue and red suitcases two young women check in for the flight to the South Sudanese capital Juba. Their suitcases...