The old man Lamine Traore comes chuffing towards an army roadblock, sixty kilometres from the western frontline in the city of Diabaly. Malian soldiers at the roadblock watch a French television channel to get the latest news about the war. Traore gives “un petit cadeau”, corruption money, to the soldiers to pass. It’s war time, but old habits don’t die. “Almost everyone has left Diabaly”, says the old man. “We fear the extremists, but I also rather stay away if the Malian army returns. The insurgents withdrew into the rice fields. Or they fused with the population in the surrounding villages. They have become invisible. ” The government soldier stops journalists. “We do not know where the Islamic extremists are hiding,” he says. “It’s too dangerous for you to continue, they can take you hostage.” Does he have an idea when his army will advance to Diabaly? “When the French army tells us to”.

Towards the end of the afternoon, the silence at the roadblock is torn apart. Led by two simple terrain cars of the Malian army a column of French armoured vehicles passes by with a hundred soldiers. A resident wrapped in the French flag shouts “Vive la France”. Another one chants “Vive Mali”. They move to Diabaly.

Driving towards the front at Diabaly there was little to be seen of the war. Children and goats crossed the road unexpectedly; men and women stood ankle-deep in the water of the rice fields. The irrigation projects along the river Niger make this area a part of the economic heart of Mali. In a conventional war, the region would be of the highest importance. But the enemies of the French conduct a guerrilla. They had been lured from their tents by the French intervention, but they will from now onwards avoid a big confrontation and flee when the better-armed French troops arrive. Weapons left behind by insurgents in Diabaly (photo: Ilona Eveleens)

The next day the French have taken Diabaly after heavy shelling and air attacks on the barracks where the extremists were based. Journalists are now allowed in their wake. Burned cars and buildings show the direct hit of the French fighter planes. The extremists had to leave behind piles of ammunition, rockets and other modern weaponry. They were well armed from looting the weapons depots in Libya after the fall of Gaddafi. The cross on the facade of the Catholic Church in Diabaly has been shot off, inside a statue of Mary lies in pieces. François, a member of the church, looks sadly at the destruction. “The rebels said they wanted to introduce the Islamic law, the Shari’a. They had a light-colour skin”. The action in Diabaly was carried out by Al-Qaeda-in-the-Islamic-Maghreb led by Abdel Hamid Abou Zeid, an Algerian commander. “They received support from Wahabites in Diabaly, the enemy is among us”, says Francois.

Near the small mosque of the Wahabites, followers of an ultra-conservative form of Islam, Imam Seida Keita sits with his many children under a mango tree. He is angry. “Residents of Diabaly say we worked together with the insurgents. But that’s not true”, he rants. ”They say we slaughtered a camel for them. And that they came to our mosque to pray. I’ve lived here for thirty years in harmony with all the villagers, but now I’m afraid of revenge. ”

The Malian army has regained its position around Diabaly. Many residents do not have confidence in their own military. The best regiment, the Red Berets, which remained faithful to the deposed president Amadou Touré, was disarmed. This also applies to a battalion of Tuaregs which after the Tuareg rebellion of a year ago is no longer trusted by the army command. The Tuaregs know precisely the desert terrain of northern Mali. This war will not be won in the cities. The French, reinforced with hundreds of West African soldiers, have taken fairly easily the three major cities of Timbuktu, Gao and Kidal in the north from the extremists. But what will follow? 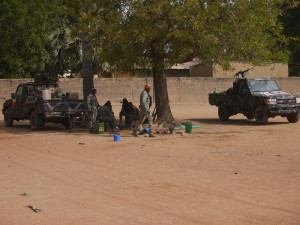 To conquer territory is not the biggest challenge in the fight against the estimated 3,000 to 5,000 rebels, as the fight for Diabaly shows. To defeat them, the intervention force has to chase them to the last sand dunes, caves and mountains, and not only in Mali but also in neighbouring countries. For that fight one needs desert rats, fighters with a thorough knowledge of the Sahara, who can find their way by looking at the stars, who can find the water sources, and also know the local rulers. The soldiers who are best equipped for this type of fight come from Chad. That country has sent 2,000 soldiers. The Chadian army defeated in 1987 the Islamic Legion of Gaddafi in such rugged terrain. Only then has the battle in the sand against the invisible enemy a chance to succeed.

The majority of the French soldiers who occupied Diabaly have already left for the front further east, past the towns of Mopti and Konna and Douentza. The journey continues on an endless tree savannah, the baobab trees watch over the barren fields. Children play in the ailing ponds of the rainy season from half a year ago. Men bake mud bricks for their earthen houses. Horse carts with piles of firewood pass a roadblock and throw two pieces of wood from the cart as a toll. Above the yellowed country hangs a sky without clouds which will only return in about six months. An arid country in which everyone dissolves, uncontrollable.

In Mopti a soldier stops journalists again. But for a “petit cadeau” he is willing to look the other way. By phone a high commander in Mopti, however, tells us that he will not tolerate any foreigner in the city. “The area is infiltrated by terrorists,” he reports. A native of the city tells about reprisals against suspected supporters of the extremists, about demoralized government troops who for weeks have now been misbehaving against civilians, about murdered people. Revenge! This poison in Mali spreads quickly and will make peace even more difficult to attain.

Conservative islam is on the rise in poor Mali The mosquitoes in the car do not observe Ramadan and eagerly attack when we drive away from the Malian capital Bamako in the early morning.... No easy solution for a divided Mali Proud ladies in expensive, colourful costumes ride on mopeds through the blue smoke hanging above the streets of the Malian capital Bamako. The perky presence... From Mungo Park to the UN invasion of Mali “Hello mate,” writes Matt in an email. “Welcome! You can come back to the Sleeping Camel. I’ve decided to stay open. Because the UN has... Mali: If the music dies… Mali finds itself in a political paralysis. A rebellion, an islamist uprising, a coup-d'etat: within mere months a seemingly stable country collapses under unresolved issues.... Mali conflicts undermine economic growth Horses, cars, donkey carts, motorbikes and pedestrians compete with one another over the limited space on the narrow quay of Mopti. Market stalls, lining the...