In the narrow, muddy streets of Masina, one of Kinshasa’s popular quarters, the sound of rumba blends with hysterical singing from Pentecostal churches; the stench of rotting garbage is peppered with the smell of marijuana. By the site of a clogged sewer, women seated under umbrellas sell fresh pineapples, a man with a tray of eggs on his head steps over a drunk guy. On a wall is written boma biso, Lingala for “Kill us.”

There’s not an inch of space to spare in the crowd. A young man grabs me by my shirt. “What do you want here, are you looking for Filimbi”, he shouts. He’s a government spy, one of many to be found on the streets of the Congolese capital of 12 million inhabitants. Despite the official ban on demonstrations, Filimbi, a citizen group, plans a demonstration in Masina today, demanding the departure of president Joseph Kabila. But the secret agents begin arresting the protesters before they can shout “Kabila must go”. “We are not frightened by this repression anymore,” cries one Filimbi activist before taking to his heels. “We are ready to die.” 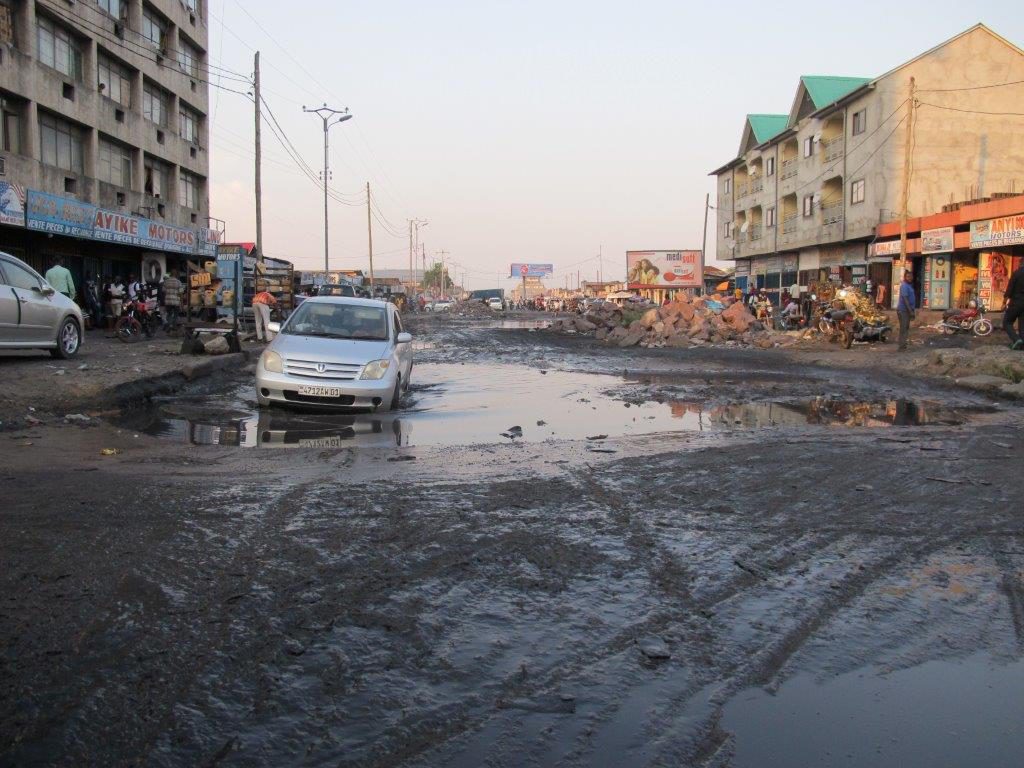 Chaos reigns in the Democratic Republic of Congo. By refusing to step down when his mandate ended on 19 December, Kabila drags the country from one crisis into another. The Congolese protested in week of the 19th by staying home and in several cities riots broke out, resulting in 30 deaths, according to the UN. Kinshasa has reverted to 1997, when the fall of the notorious kleptocrat Mobutu Sese Seko ended a 32-year dictatorship. Then, too, a country with barely any functioning public institutions saw its towns turn anarchic, while murderous militias ran rampant in the rural areas. Just as in Mobutu’s days, the Catholic Church is organizing a dialogue between Kabila and the opposition, thereby further splintering the opposition.

But there are also important differences between now and then. Congo now has a new constitution which makes it illegal for Kabila to remain in power. And there is a budding alternative to the predatory political class in the form of Filimbi and Lucha, citizen groups which via extra-parliamentary opposition, seek to challenge politicians working for both the government and the opposition.

Village life dominates in the side streets, the grand boulevards surrounded by illuminated buildings in the city center are for the champagne and salmon consuming elite in four-wheel drives. Africa boasts few places where the difference between rich and poor is as poignant as in Kinshasa. The country has the worst poverty on the continent. Over eighty percent of the eighty million Congolese live of one euro a day, and the vast majority is unemployed. Officials are only occasionally paid their salaries and, more than ever, the police feel free to steal. Policemen stand right in front of your car in a traffic jam, force their way into the vehicle and try to snatch your bags. Refuse to pay them and you risk a beating. It is an everyday day street incident, no one escapes.

The police are the worst. During the September 21 riots, the day elections were to be announced, officers went on the rampage. Members of Kabila’s 15,000-strong presidential guard, disguised as policemen, fired live ammunition at protesters, causing fifty deaths. “The victims received bullets in the head and chest, women were shot in their backs,” says Jose Maria Aranaz of the UN human rights division. “Most human rights violations in Congo are committed by the army and police. The state is merciless, just as it was under Mobutu.” 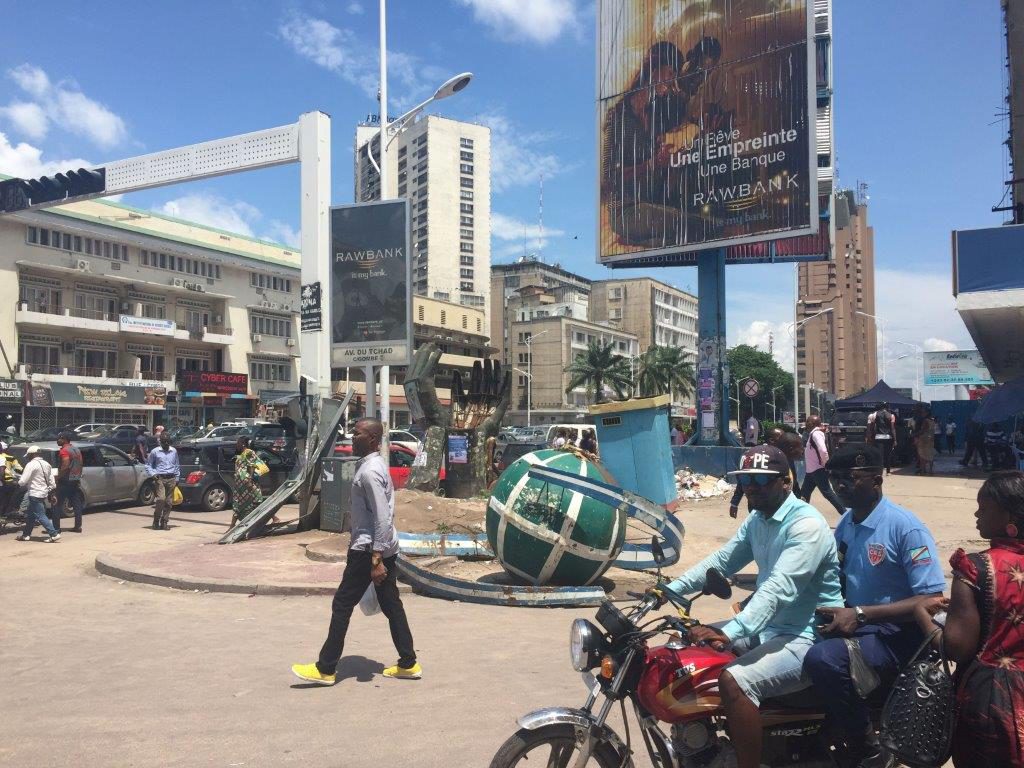 The history of terror, exploitation and divide-and-rule politics in the Congo runs from the Belgian King Leopold II (1885-1908) to Mobutu (1965-1997), then to the Rwandan invasion which brought Laurent Kabila to power, leading to a continental war (1998-2002) in which nine African countries were involved and hundreds of thousands Congolese died. Numerous armed groups which emerged during that war are still active in eastern Congo. They often serve as puppets for politicians or government troops bent on gaining access to mineral resources or political influence. Religious sects are also becoming increasingly violent.

A democratic power transfer has never taken place. Joseph Kabila was passed the scepter by his murdered father. In 2002, all Congo’s armed groups signed a peace agreement after months of negotiations in South Africa’s Sun City that brought relative peace and democracy. Kabila then won two elections, fraudulently in 2011, according to many observers. Congo is potentially the richest country in Africa, thanks to its wealth of raw materials and fertile farmland. The people see none of that. Under both Laurent and Joseph Kabila a mining mafia emerged that steals billions of dollars in revenue.

In this seemingly hopeless political situation, Filimbi and Lucha glisten like pearls in the mud. The groups’ few hundred young and educated activists grew up after Mobutu. They exploit social media such as What’s app and Facebook to muster support, for political agitation but also for slum clean-ups. Afraid of spies, they agree to meet me in expensive restaurants. “The Congolese mentality has to change, the masses must understand how the system of exploitation works,” argues Carbone(not his real name) of Filimbi. “We set up our social movement to combat cynicism, because the Congolese had lost hope. We are challenging the entire political class, not only against Kabila.”

During a soccer match, activists of Filimbi and Lucha chanted “Kabila bye bye”, prompting the state to suspended the television broadcast. Activists write slogans on banknotes. “We want to be a school for activists, independent of the politicians, who all take bribes,” says Chris of Lucha. “We are campaigning in favour of a new kind of Pan-Africanism, African solidarity among citizen groups. In Burkina Faso and Senegal citizen activists like us expelled presidents. We pose a greater threat to the ruling class than the official political party opposition does. That’s why the government calls us errand boys of the West.”

The citizen activists actually spread Western values such as democracy and human rights, and many previously worked for Western organizations. In a repressive state their impact is difficult to gauge, but during the recent demonstrations many young people said they support Filimbi’s demand for good governance. They brandished the red card for Kabila and blew whistles (Filimbi means “whistle”).

The only institution Filimbi and Lucha still trust is the Catholic Church, “because priests do not take bribes”. In the absence of functioning state institutions, the church shouldered both political and social responsibility years ago, the clergy playing the role of mediators during the current political impasse and helping impoverished Congolese to survive. In the Barumbi district the parish runs the primary school Saint-Pierre alongside the state. “The government is not delivering, so the church does the work,” says Father Oliveira. “In Congo the dignity of the common man must be restored. The poor need a leader because the situation has never been so disastrous.” 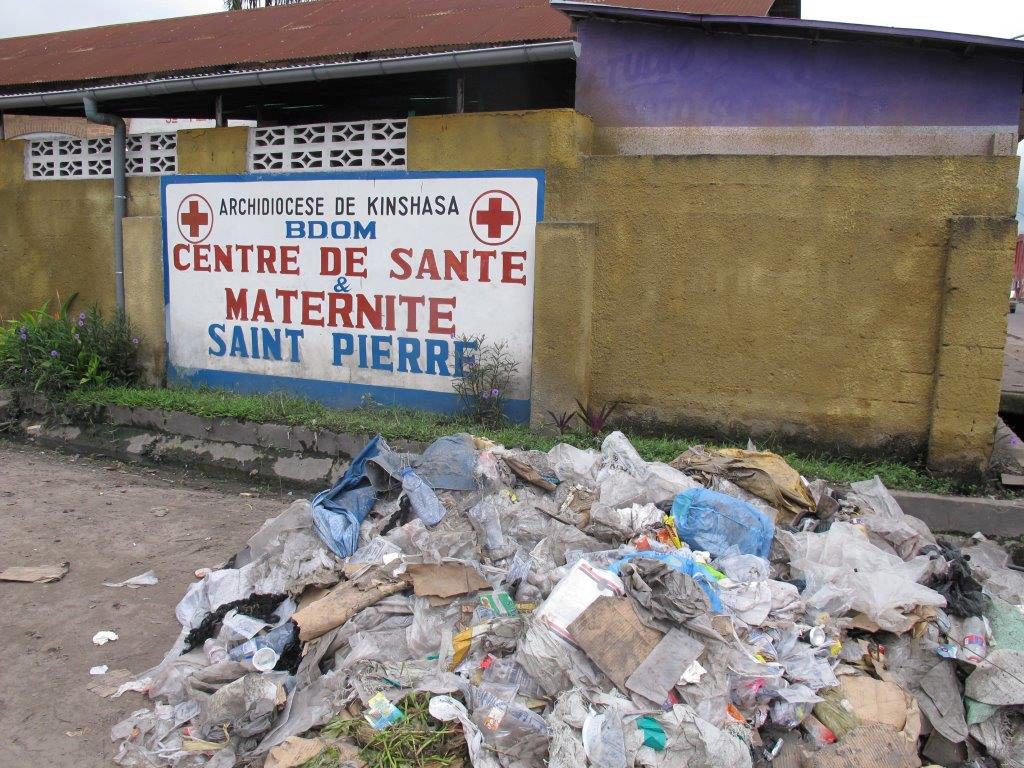 There’s a dead rat in the schoolyard, students play alongside heaps of garbage. A teacher paid by the government speaks of his “salaire de misère ” of 100 euros per month, not enough to send his own children to school. The school was built in 1936 by a Belgian priest, consists of dark classrooms with leaking ceilings. The toilets gives off a strong stench; the headmaster hasn’t got the money for a detergent. “Children whose parents cannot pay the school fees of 120 euros per term are sent away,” he says. “So our classes have only 15 children each. Most young people in Kinshasa do not go to school, they live on the streets as criminals”. He smiles wryly: “So you see, if you go to school here, you already belong to a kind of elite.” 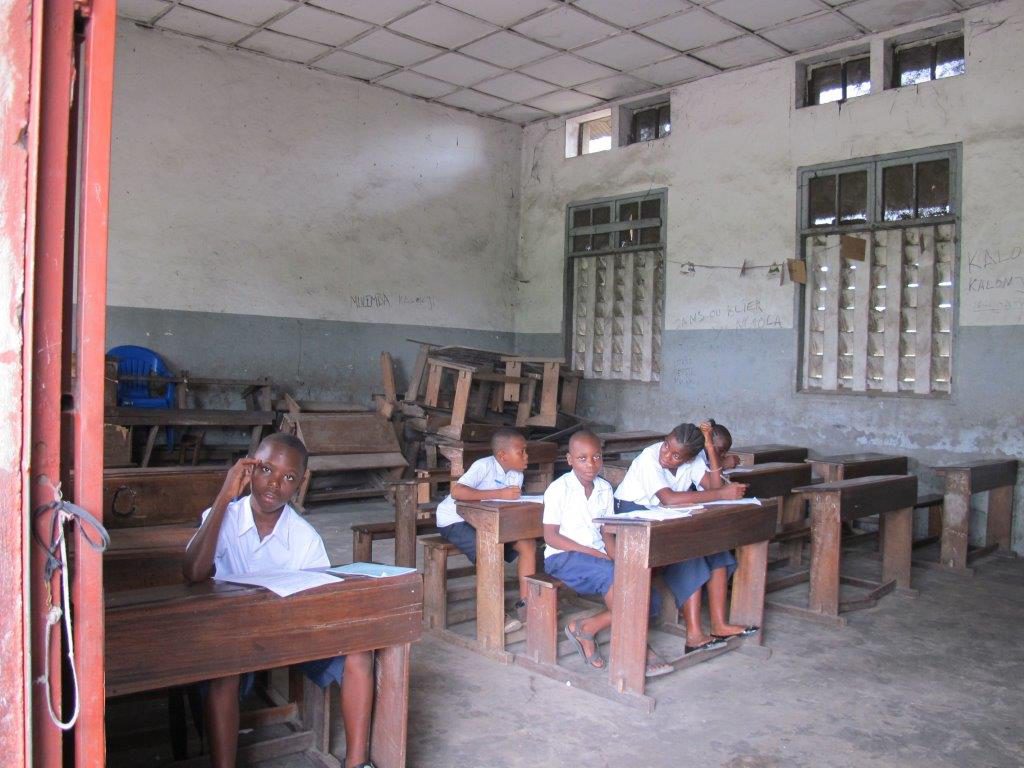 How, then, do you survive in Kinshasa? By ubuntu, African solidarity. And by corruption, each in his own way. A toddler learns the game watching his parents pay bribes for a place in nursery school, at the primary school and the university he buys good grades, and as an official or employee he learns from his bosses how to extort money.

Father Mukendi worked for years with the insurance company Sonas, his son Pièrre has a job at the Office Congolais de Controle, a state body that monitors quality and quantity of goods. The insurance company’s boss stole the father’s retirement money and bribed the judge when he went to court. In a normal society, a supervisory agency and an insurance company operate on the basis of trust, a word rare in Congolese vocabulary. “Honesty is impossible,” sighs the father. Son Pièrre nods in agreement. “At my work with Office Congolais de Controle everyone wants a job at the border. Because that is where the illicit commodity exports takes place and where an officer can earn lots of money,” says the son. He lost confidence in the remains of the state. “If courts and our president are crooks, why should I respect their authority?”

A population hungry for political change, frustrated by the lack of socio-economic opportunities. It’s a mixture capable of destroying Congo, although the country has no history of revolutionary resistance. Every year Kinshasa continues to expand, adding another        400 000 new jobseekers. They live as refugees in hideaways of cardboard and corrugated iron. “Only three million Congolese work in the formal economy, the rest survives thanks to ubuntu,” says Senator and former Prime Minister Adolphe Muzito. “These hordes of unemployed street boys will one day attack us all ” Muzito predicts what he calls social jihadism. “If these angry young people joins forces with political protesters, all hell will break loose. They have no fear left to die.” 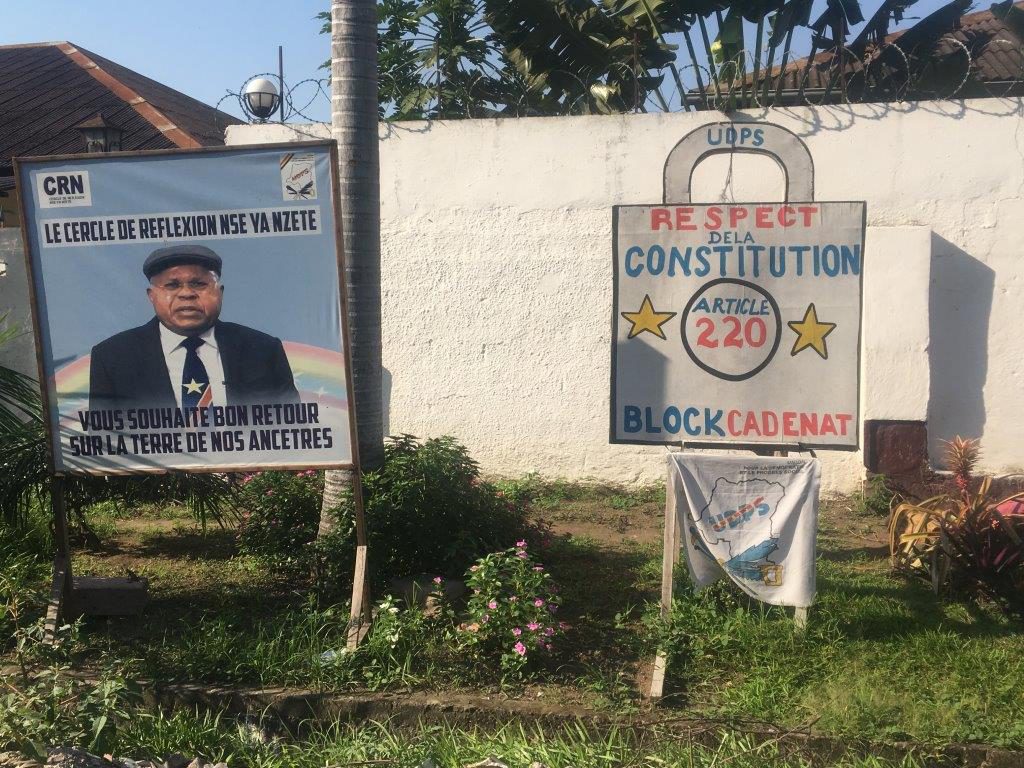 Can robots in Congo bring order where humans fail? Congo river at Kinshasa facing Brazaville The Botswana diplomat politely presents his passport at Kinshasa airport. He is startled when the customs official slaps it... UK and US must play more consistent hand to end world’s worst war Economically growing Africa attracks foreing investors. But how can Africa prosper when it's heart is at war with itself. Why do US and UK not...