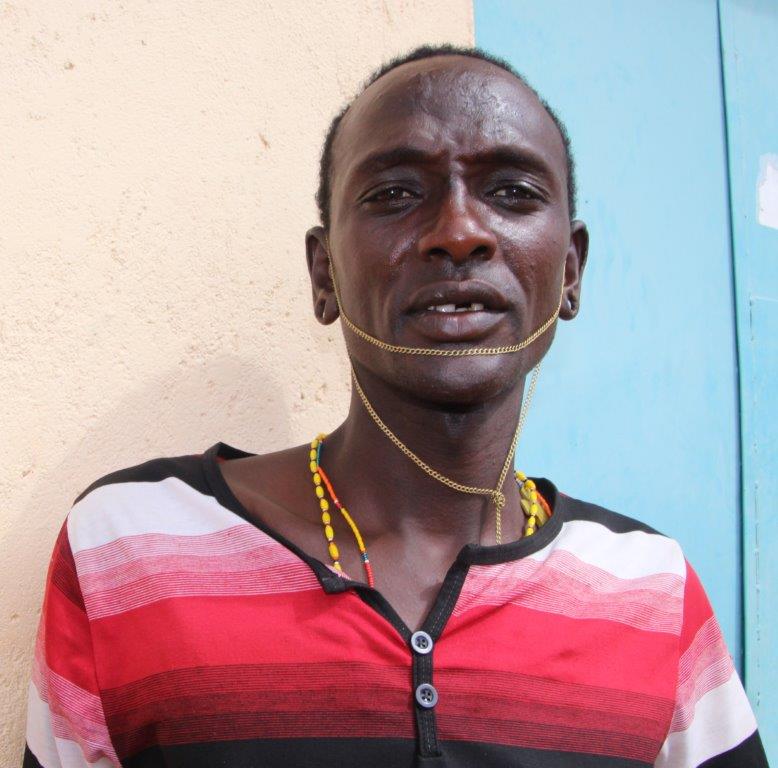 He was the toughest of the toughest. Yet the around thirty years old Lkipseina Lenawuosho has stopped living the harsh nomadic life, he has been defeated by the worst drought in forty years, by lack of space, by violence. “Since I was five years old, I wanted nothing more than to travel around with cows, the life of a shepherd was beautiful,” he says in his native region of Ngupuruti, the savannah region of northern Kenya. There are only tracks here, no roads. There are no stone houses but low build structures, a kind of igloos of mud and cow dung. “At the time I thought my agemates who gave up their freedom and went to school were stupid. Now I accept my loss, the era of the cow has come to an end.”

The inhabitants in the kraal of Lkipseina are weak, they have been eating too little, for months now they have not been able to eat until satiated. When the world still had its green beauty and grass made the cattle fat, the traditional knowledge passed down for generations of the Samburu people, to which Lkipseina belongs, was sufficient for a good life in these savanna regions.

But now the land looks gray, whirling winds push the dust of the bone-dry earth into the air. The bushes no longer bear any leaves and only the desert rose still gives off bright colours. Towards evening, his young wife squats behind a goat, and a thin trickle of milk from the parched udders shoots into the gourd. Everyone is tired and goes to bed early. There is no singing of young warriors, since the last shower two years ago they have moved elsewhere with the remaining cows, very far away, a four days’ walk. “There is no happiness in our lives anymore,” says Lkipseina.

He once tended two hundred cows, less than a quarter of them remain. In his kraal enclosed by thorny bushes, he sadly inspects a handful of meager goats, their fat gone, as well as the hope that the last animals will survive. Goats and sheep will usually withstand drought much longer than cows, with their small snouts they can still find something to eat in crevices and under stones. But even that is not possible anymore, so now they are fed with the fruits from the top of the acacia trees, the very last resort against starvation.

The increasingly frequent and protracted droughts and rapid population growth over the past half century – there are too many people and too many livestock – has disrupted the livestock economy. As a result, the cattle lose more and more value.

Lkipseina: „I have no memory of any major droughts in my childhood. Then the cows stayed around our kraal almost all year round. When we moved away, it was only for a few months, looking for pastures. The first time I went far away was to the Ethiopian border, ten years ago. The journey, with two hundred cows, took nine days and we stayed there for six months”. Lkipseina slept with his fellow herders among the cows in the bush, wrapping himself in a loincloth and using a neck chair as a pillow. They fed by mixing milk with cow’s blood. “It could happen that I did not eat for four days. Then it creaks and hurts all over your body, your eyes sink in, you can no longer see well and you tremble on your legs”.

Only if you adapt to the lifestyle of a cow, you are suitable as a herder. Lkipseina got used to the spartan nomadic life. The absence of luxury was not the hardest thing he had to endure. “Oi, joi, joi,” he says, “it happened so often that other nomads tried to steal our cows. Sometimes we had to fight off a hundred attackers. Of course there were deaths on these occasions, once we killed thirteen warriors of the Boran people in an attack. A nomad nowadays cannot do without a gun”.

In another drought year, he marched with the warriors in yet another direction, west to Baringo. There he got into a fight with the Pokot, another nomadic people. “The Pokot were always trying to rob us, sometimes twice a week. We each had at least three hundred bullets tied around our waists. As a child I never imagined that a shepherd’s life would be like that, that you would be at odds with so many other hostile peoples.”

The herders also increasingly clashed with owners of large cattle ranches. “You do everything for your cows. So I cut the barbed wire and secretly let my animals graze on those farms at night. That was dangerous, because the rich landowners call in the army for help and the soldiers can shoot at you, or worse, they can confiscate your cows.” 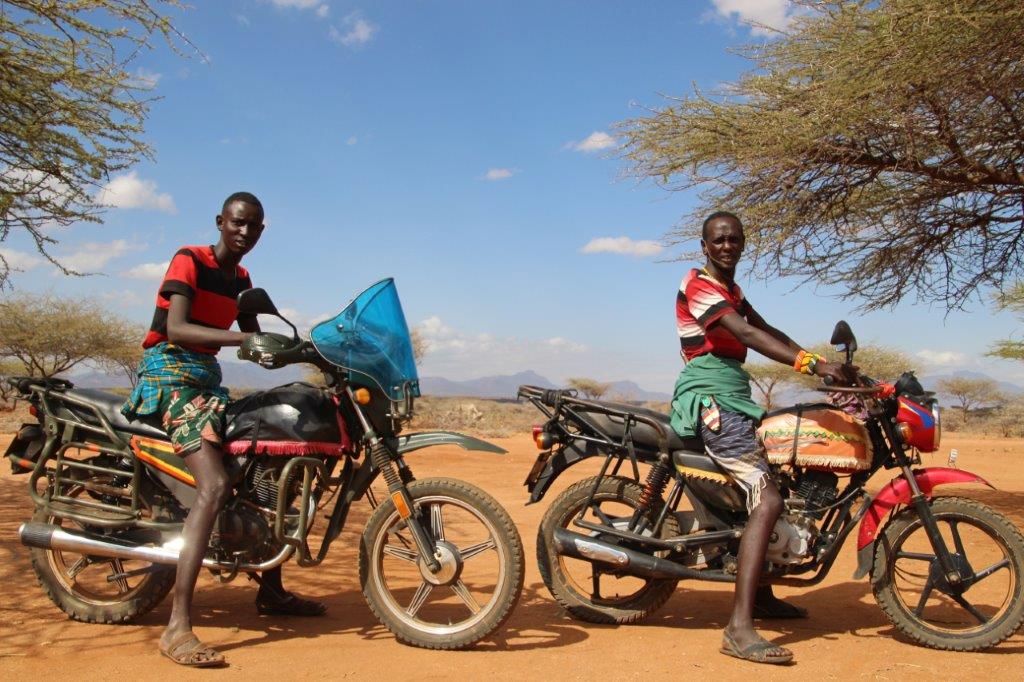 Last year when nearly all the grass had disappeared his cows started to die. That’s when he decided to get rid of most of his herd and he drove the animals to the town of Nyahururu. “It was my own decision, although I had of course -out of respect- informed the elderly. They thought I was stupid.” He bought a motorbike for three cows. “The only cows that have benefited me in my life are those that bought me my wife, my rifle and now my motor,” says Lkipseina bitterly.

Despite the deadly drought, the cow remains central to the culture of Lkipseina’s Samburu people. She is needed as a dowry to marry, to dispel a curse, to pay a fine. Lkipseina still feels the urge to go out with cattle, the sweet smell of cow dung hangs around his soul. “With your animals you never feel alone. Ai, jai, jai, but how lonely I am when I drop someone off with my motor in a town where among all those people I don’t understand anyone. I communicated with cows. I sang to them, I knew when they were dissatisfied”.

Young Samburu admired Lkipseina for his perseverance but go to school instead of choosing for a nomadic life. They don’t want to make the long treks he made all his life. “They already come back stressed from a one day walk with the goats. And they take, hidden under their loincloths, a schoolbook so as not to get bored,” snarls Lkipseina. “I don’t take dangerous journeys anymore, I don’t want to die and leave my family alone. I am the last of my family to have had such a hard life, my parents never had to go that far for grazing land. I was mad, if only I had sold all my cows much earlier.” Lkipseina is still an exception, but many young people praise his break with nomadism and say that they will also sell their livestock if drought keep on coming back with such a vengeance.

Lkioseina now uses his purchased motor as a taxi to earn some money. He zigzags through the dry riverbeds and across the savannah with a few passengers on the back. “I have started a new life, as a responsible man for my family. Of course I still have a few cows on hand. You never know”. 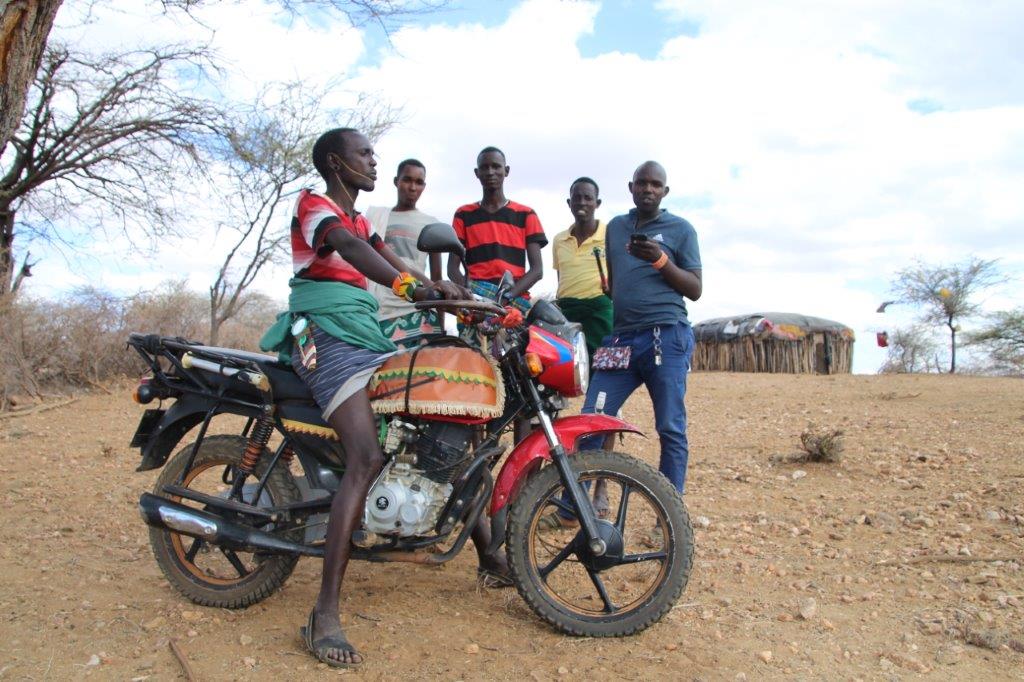 DROUGHT AND HUNGER IN HORN OF AFRICA

“MORE THAN HALF OF THE SOMALIANS IN NEED”

A drought of unprecedented proportions affects millions of people in the Horn of Africa – the eastern tip of Africa’s mainland, which includes Somalia and Ethiopia. Relief operations are difficult due to lack of funds. Less than a quarter of the millions of dollars needed have been pledged.

Seven million people in Somalia are in an emergency, according to the UN. That is more than half of the population. There are 10 million people in need in Ethiopia, 14 million in Sudan and 4 million in Kenya. Millions of cattle are already dead and some 210,000 Somalis are at risk of starvation in the coming months. In Somalia, a weak central government is fighting against terrorist group Al-Shabaab. This makes it difficult for aid organizations to reach the population.

The war in Ukraine caused a worldwide shortage of sunflower oil and wheat, and led to inflation. Two years ago in East Africa, huge swarms of locusts ate anything green. Then the drought started.