He does not like to tell his story. Edouard Bomporiki rubs his eyes. That terrible image in his head. He was eleven years, too young to participate in the genocide that began on April 7, 1994 in Rwanda, and cost the lives of 700,000 Tutsis and 100,000 moderate Hutus.

“I was lying on a hospital bed with malaria when an old Tutsi man ran inside carrying a baby. He hid under my bed. The extremists of the Interahamwe militia pursued him. They beheaded him and then split his skull into two. The baby they beat to death with a club full of nails. I did not understand. My mother said: ‘Oh my son, you will never understand.’”

Twenty years after the genocide, Rwanda is still a traumatized country. The survivors live with a shadow in their souls, with a daily feeling of emptiness. Many of the one million Hutu perpetrators of murder, rape and theft are haunted daily by the memories too: the images of how they routinely hacked to death children and the elderly with machetes. The people under 20 years, to whom the stories were handed down from their parents, equally become victims: they either carry the stigma of the atrocities of their father and mother, or the feeling of hatred because their families were exterminated. The killers and the survivors must live on the same hills and in the same villages. “Rwandans are working hard on reconciliation, but we are still injured. Everyone is looking for recognition for what happened to him. Therefore, every Rwandan has his story to tell. That is the only way out,” says Edouard Bomporiki. 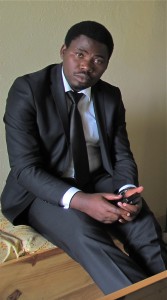 A close family member was a murderer; he belonged to the Interahamwe, the militia of Hutu extremists. “I am innocent, but ashamed to be Hutu. Every year around April 7 I feel the tensions rise. I dared not participate in the annual commemoration.” Only in 2006, he gathered up his courage and decided to read a poem of his at a memorial service. “A Tutsi spoke before me of his memory, and I began to cry. My poem I could no longer recite.” Edouard stood silently before the microphone. Then he said: “I am a Hutu, and I’m ashamed of what the Hutus did to the Tutsis. On behalf of the Hutu I ask for forgiveness.” Like a bolt from the blue sky. Never before had a Hutu given such a public apology on behalf of his community. A taboo was broken. That’s how Edouard became famous in Rwanda.

On a rainy night, two friends Marcel and Ireze stop by at his home to view his movie The Long Coat. Marcel is a survivor, and Ireze a son of murderers. The film is about a young Hutu man (acted by Edourd), and a young Tutsi woman who both discover how the parents of one of them had caused the death of the brother of the other. After watching the film a long silence ensues. Marcel, who lost nine family members, says: “Sometimes I want to cry constantly and be alone. The first few years I trusted no Hutu. It’s better now. I can tolerate them, especially if they publicly declare their sin.” Iréné, whose parents were imprisoned for life: “I still wonder why they did it. They could have refused. For a long time people were pointing fingers at me and said: ‘Look, there is the son of a mass murderer.’ I retreated into my isolation. Yet I still love my father.”

A neighbourhood resident arrives. “Look, I’m a Tutsi,” he introduces himself. He shows his long fingers and points to his sharp nose, both presumed characteristics of Tutsis. But it is not that easy to distinguish Hutus from Tutsis. Hutus sometimes also have long noses. He feels the tense atmosphere after the movie and says: “Also my whole family is dead”. Everyone begins to roar with laughter. “We laugh to keep from crying,” said Edouard, “to be able to bear the pain.” The neighbourhood resident however is a Hutu and his parents were murderers. Rwanda the land of a thousand hills, Rwanda the land of a thousand lies.
10,000 deaths per day, 417 per hour, or 7 per minute: for nearly one hundred days. The genocide in Rwanda was the fastest genocide of the last century. The Hutus and Tutsis lived for a long time integrated together, with the same language and culture. The Belgian colonialists introduced identity cards indicating the ethnic background, but after independence in 1962 the Hutu rulers practiced official discrimination. Thus arose the contradictions.

The country exploded in 1994. The Tutsi rebels of the Rwandan Patriotic Front (RPF) of the current President Paul Kagame had invaded the country in 1990 from Uganda. Extremist Hutu’s around President Juvenal Habyiramana started calling Tutsis cockroaches. The shooting down of Habyiramana’s plane in the evening of 6 April, presumably by Hutu extremists, signalled the beginning: all Tutsis must be killed. Very quickly the killing spree spread from one hill to the other. Sometimes it was done on the orders of the Interahamwe and the army, sometimes Hutus went on their own initiative to attack their Tutsi neighbours. Moderate Hutus who were aligning with Kagame’s rebels, also went under the axe. Tutsis who sought protection in churches were slain in their tens of thousands, their children smashed to pieces against the church walls. Some priests also participated. Peacekeepers from the UN withdrew. One hundred days later, the RPF was able to put an end to the slaughter. More than a half million Hutus and Interahamwe and government soldiers fled to Congo.

“Rwanda is not a happy country,” said a Western diplomat with understatement. “All things revolve around safety, and the creation of a social security.” As prevention of a new genocide, resurrected from the ashes is the emergence of a new nation, albeit an authoritarian and controlled state. Under Kagame Rwanda became an economic success story. Everything was broken in 1994. Judges and officers were slain or had fled, archives were destroyed. And residents were looking for revenge. “Ordinary” murderers received light sentences, because the prisons were bulging. Tutsi survivors received no special compensation. Because Kagame needed the support of the Hutu majority (85 per cent of the population) he built a government elite of his own RPF, moderate Hutus, and a new strong army of Hutus and Tutsis.

The economy has grown in recent years by more than five percent. All over the country large buildings arise, one million people rose above the poverty line, infant mortality has been reduced by 70 percent, life expectancy went from 36 to 56 years, students receive education with computers and the country is known as one of the least corrupt on the continent. “In Rwanda, you get value for money. It is one of the most successful development co-operations”, says the Dutch ambassador Leonie Cuelenaere. About the outcome of Kagame’s policy there exists little controversy, but much about his authoritarian methods that restrict press freedom and dissent. His intervention in the Congo to eliminate the last perpetrators of 1994 led to tens of thousands of deaths, and the RPF dissidents abroad know their life is not safe.

Village tribunals
Edouard has been invited to a meeting of his constituency. Top of the agenda are the preparations for the commemoration on April 7. “We still have so much to tell,” begins a businessman, “and we want the killers to inform us where they have buried our families.” “If we start that kind of storytelling, it will become a never-ending story,” says another. A proposal is adopted to send over 2000 trauma workers for the commemorations in the district. Every year, many attendees lose control over their emotions. At the end of the meeting under the pleasure of a social drink a man comes to talk to Edouard: “Did you know that a relative of yours killed my grandfather and my brother?” Edouard stiffens. “Do not worry,” the man says, “I have learned to survive.”

Forgiveness, is it possible? After the trial of suspects by 12,000 village tribunals, maybe a little bit of justice has been established. But the more than 11 million Rwandans have not yet come to terms with their own past. “Twenty years later, increasingly more traumatized people are reporting themselves,” said Theophile Sewimfura, employed by the organization’s community based Socio Therapy. “Only when you feel you are being respected and trusted, can you begin to feel free. Then you see a meaning in life.” He organizes talk sessions with offenders and victims. “Some people say they do not understand why they turned into such monsters. It worries me sometimes that inside every person hides a potential killer.”

Theophile takes me to a wedding in a village. Two Tutsis marry; their witness is a Hutu from a family of murderers. The people at the party are praying and laughing under the banana trees, a calabash of beer is being passed around. In the background are the marshes where the hunted Tutsis were sheltering. 45,303 bodies were found in this region.

Two older attendees are Jean Baptiste and Theogene. Jean Baptiste lost ten children and his wife, Theogene was hunting Tutsi’s with the Interahamwe. “I wanted Theogene dead when he came back from the Congo,” says Jean Baptise, “but now I understand that we have to help each other heal. Because of socio-therapy my pity returned.”

After a big laugh Jean Baptiste hides his head in his hands. He walks off into the bushes. Crying is normal in Rwanda. Theogene follows him, puts his arm around his shoulder and says, “Be brave, this is part of our long road together.”