He is a world-famous journalist but can’t show his face. To make an appointment one has to use different telephone numbers and go to a secret place in the Ghanaian capital Accra. Then suddenly he stands before me, without a mask. He turns out not to be a very flamboyant man, with his thick glasses he resembles rather the nerd of the school class than the hero of the people. Anas Aremeyaw Anas shows himself to be a real Batman.

“I fight against the bad guys”, he says while he puts his wig with curly hair on for the interview and his mask with beads hanging from the front.  During the meeting my eyesight pierces through the beads. Anas excuses himself: “I want to be left to tell the next story. Because I do undercover work, I want to keep my anonymity. That has always been my secret weapon, it helps me to get into places and nobody recognises me”.

Anus has many different appearances since he started work as a undercover journalist in 1999. He dressed like a rock to film smuggling activities along the border. And he acted like a madman to report on abuses in a psychiatric institution. He behaved like a beggar to catch money extorting policemen, or dressed up like an American oil worker in the Middle East to unmask a syndicate of dealers in the sex industry.

His biggest scoop came last year with the disclosure of corruption in the judiciary of Ghana. After many months of undercover work, he presented footage of twelve High Court judges taking bribes and 22 lower judges unveiling it to an audience of 6500 people in the International Congress Centre in Accra. For as little as a goat they were willing to be bribed to change their verdict. These disclosures shook the nation; the rotten judiciary became the talk of the town.

Anas grew up as a son of a soldier in the barracks, where he learned about injustice by undisciplined military against innocent civilians. He started by studying journalism but quickly realised that studying law would be more useful to him. He has received 14 international awards for his work and in 2014 the Pan African monthly magazine New African proclaimed him “One of the most influential Africans of the year”. President Obama during his visit in 2009 to Ghana called him “a courageous journalist who risked his life to report the truth”.

Has anybody ever physically threatened you?

“It is normal. And that goes for every African journalist. If nobody is threatening you, it means you are not doing the right thing, you are not stepping on the right toes. It is a daily occurrence. It is how you deal with these threats that shows who you are”.

The scope of his work expanded over the years and his research done with his company Tiger Eye Private Investigations and in collaboration with media like Al-Jazeera has now spread over the whole continent. “The biggest headache Africa has is its judiciary. And that does not only relate to Ghana. The judiciary thing I did was originally not meant for Ghana. It was a pilot program that was supposed to start in Nigeria. I had also done a pilot in Kenya. And I can tell you it is horrible what I found”.

According to Anas the greatest challenge for Africa is how to improve the judiciary. “Judges are our last hope for justice in Africa. When judges take bribes it is so hurtful, it destroys the whole fabric of society”. 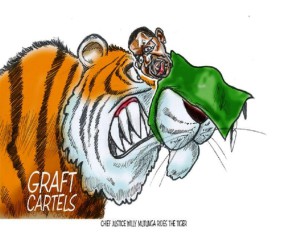 Willy Mutunga, the Chief Justice of Kenya, tries to tame corruption in his own judiciary. But he encounters big resistance from other arms of the government. What can you do as a crusader against corruption when the anti-corruption commission is corrupt? Mutunga describes himself as somebody trying to ride a tiger while the tiger is trying so swallow him. “I sympathise with him”, says Anas. “Sometimes you have committed people inside the institutions but they don’t have anybody to support them, you will find them as lone rangers. If you stand for the truth, you always stand alone. That is why we come in. I have opened my doors to all chief justices of Africa, if they are truly committed to wipe out judicial corruption, we are prepared to assist in this regard”.

It is a thin line between being a journalist and being a detective. Some of the judges accused of corruption went to court because they said you obtained the evidence unlawfully. The combination of a journalist, a detective and a moralistic sharpshooter is controversial.

Are you seducing people?

His beads start trembling; his voice raises. “Some people call me a spy, a detective, a vigilante. I try to name, shame and jail, that has been my mantra. A human trafficker got 45 years in prison because of my work, a drug dealer got 8 years, cacao smugglers are in for 16 years and 12 Supreme Court judges and 22 other judges have been fired. What matters is the result. My society needs my type of journalism”.

This article appeared in NRC Handelsblad on 7-4-2016