When dawn is still in the distance, the desert locusts hang lethargically in the trees. From a distance it seems as if the trees are covered with a dense layer of yellow flowers. With the first warmth of the sun the feelers of the cold-blooded animals start moving and after an hour they stretch their wings. And then -suddenly- one of them startles, the bunches explode and send thousands and then millions into the air. The sky is strewn, the light is dim. The desert locusts take over the world at Kamuwongo in northeast Kenya. 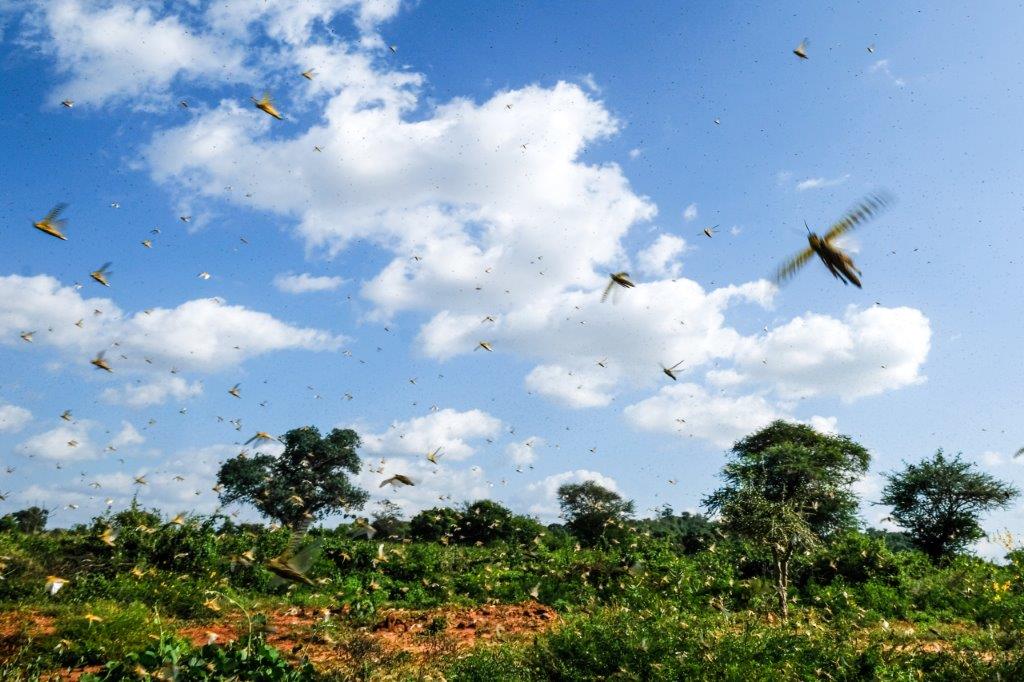 Now the sun is baking the earth and full of energy they are spreading over the crops in the surrounding fields. Drums and rattling cans break through from all angles: residents shriek and clap their hands. “Oeweé, oewée”, shouts farmer Mwikali Mwendwa and she waves wildly in the air, assisted by her husband Samuel who beats on a piece of corrugated iron. The old man is the only resident in the neighbourhood who still remembers a similar invasion of the locusts in the fifties. It has been a very long time there was such a large locust plague. Mwikali sadly shows the perforated spinach leaves, their damaged pea plants, their legumes with large holes. The voracious locusts throw themselves on all the greenery, but they leave untouched the yellowed leaves of the corn and sorghum, which is almost ready to be harvested. “If our field dies, then we die,” mutters Samuel. His wife makes a swarm fly up, which lands on the neighbour’s field. Tired, she sinks down among her peas, stares in front of her, defeated, and then kills one with a twig. It all seems futile, there is no way to fight the force majeure of the desert locusts. 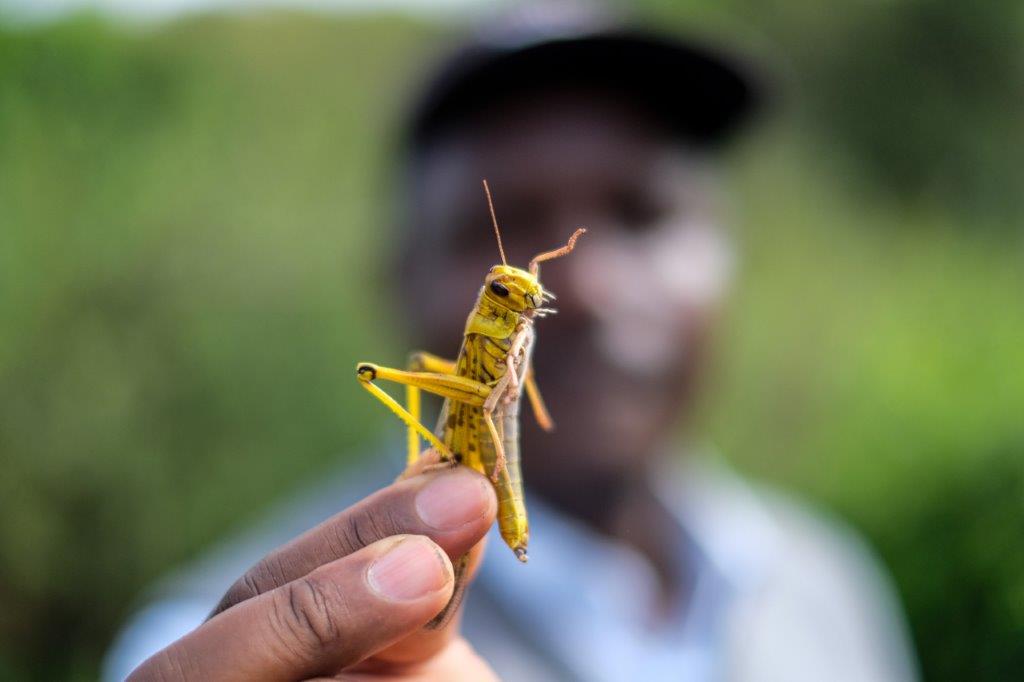 Daniel Mumo, who works with the Kenyan Ministry of Agriculture in the district town Mwingi, holds one between his fingers. A desert grasshopper is shy and the creature preferably leads a withdrawn life, but in the presence of too many of its own species it develops into a gregarious animal. “You see that big eager mouth,” Daniel says, turning the yellowish little beast and showing his spiky paws, his spotted wings, his armoured body. “This is one of the worst insects for agriculture. A swarm of forty to fifty million eats as much as ten thousand people a day.”

Their success story began at the end of 2018, when two large cyclones above the Indian Ocean brought heavy rain to the Saudi Arabian desert. The warm humidity in the region created an ideal situation for reproduction and swarms went east to Iran and as far as India. In Yemen the war made combat near impossible. And so, they expanded to Africa, from Djibouti to Eritrea and lawless Somalia, to Ethiopia and Kenya.

It has been raining extensively in East Africa since the small rainy season that started in October. Rains have fallen many times more than usual. All vermin seize their chance. White butterflies flutter among desert locusts, numerous malaria mosquitoes in the evenings search for blood and army worms may be preparing for their march of destruction. Yet the rains also brought prosperity. A more than normal harvest is expected in the region and most crops such as corn and sorghum were already ready to harvest. So, for now, the damage remains limited in this region.

The spraying on the ground and from the air appears to have been inadequate since the invasion last month. The first two pesticides used did not work well. The locusts were only stunned, started eating less but did not die.

The locust fighters of the ministry keep each other informed with a WhatsApp group. The desert locust is a nomad and rarely sleeps in the same place. Where they were yesterday, they have disappeared today. A message appears about another swarm, fifty kilometres away in the picturesque landscape with red earth, balding rock mountains and baobab trees. Simon Kange, a local employee of the ministry, rode in the morning on his motorbike in the area of ​​Kyuso and got covered with the locusts.

In the afternoon he takes me there again. Upon arrival with Simon the swarms go back and forth in the air, in wave movements from left to right, and higher up in the sky too, and above that another layer. Not millions but billions, maybe even more. Their shadows dot on the floor, like a reflection of a crystal ball. A layer of small shit covers the earth. Farmer Bernard Mulala comes running towards us. He can’t shake our hands, because his arms wave continuously. Since morning he has been waving. And keeps waving. He is in shock; he cannot stop even though he has already given up the fight. “I cannot continue”, he says in a hoarse screamed voice, “it drives me crazy.”

“Go away, go away, you vermin,” two young farmers shout in a field on the other side of the sandy track. A man on a moped gets off, because his view gets obstructed, a shepherd boy passes by, his cows hardly visible. A young girl waves her way through the pests with her school uniform’s sweater. 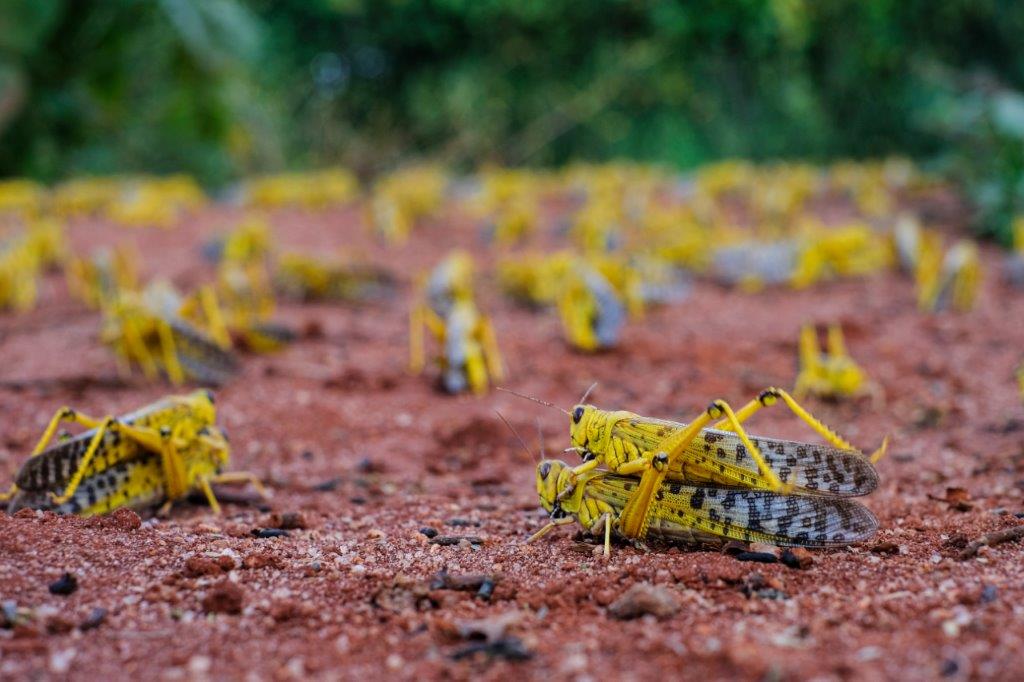 By the end of the day it is time for sex. Because reproduction is better on a full stomach. Part of the swarms are descending. “This is the most crucial moment in the cycle of a desert locust,” explains Simon Kange. Appalled, the villagers watch the animals jump on each other on the sandy ground, how they tremble with excitement, sometimes five on top of each other, how they tumble over each other, how the males fight over the females. They rustle, they can no longer be chased away by noise. They turn with their big eyes to the muted onlookers. They have won.

“The females lay more than fifty eggs each,” says Simon. They dig holes in the loose sand. “I saw them this morning in an area covering 25 square kilometres. This is where the disaster begins. In three weeks, that one female will have multiplied at least fifty times”. At sunset the desert locusts roost again, so that they can continue their advance tomorrow.