Australian pine and red-legged centipedes were the basic necessities to revive a dead limestone quarry and transform it into a lush park.  In the Haller Park, near the Kenyan port city of Mombasa, an impressive variety of trees, shrubs and plants grow and flourish on which feeds a host of animals.  Already parking is often difficult at the entrance to the park because one has to manoeuvre between the long legs of giraffes while they nibble unperturbed on tree leaves. A herd of Oryx antelopes, with their long and slightly curved horns, always seem to take the right of way on the walkways.

The park is the oldest example in Africa of how a lifeless landscape can start living again. The flora and fauna disappeared when the area was excavated for limestone used for manufacturing of cement.  “The company voluntarily brought back in the seventies, the biodiversity. A unique decision in those days”, says Sabine Baer, head of Lafarge ecosystem, part of the multinational Lafarge Bamburi Cement.

Mining companies in Africa are rarely required to rehabilitate nature after destruction by economic activities. Recently though Tanzania passed a law that obliges mining company to do so.

Baer, ​​a Swiss biologist, loves to temporarily swap her office and paperwork for a walk through the park, less than a kilometre from the coast of the Indian Ocean.  With firm steps she makes her way through tall grass. She stops at a fenced piece of land with three young trees. One is an Mbambakofi tree which, although native to the East African coast, is now a rare and endangered species. Herbalists swear that the mashed roots of the tree are a remedy for snake bites. 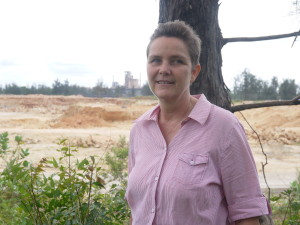 “We have to protect them until they are big enough otherwise the giraffes eat them bare in one go”, says Baer. A little further the lush greenery stops abruptly at an almost excavated quarry of Lafarge Bamburi. While it is relatively cool in the shady park, it feels like an oven in the quarry. As soon as the excavation here has ended, there is work to be done for Baers ecosystem.

The place is a perfect visual example of how it once was, and what is possible. “This part of the park is not open to the public but I want to put up a fence and make it accessible. It says much more about what took place here than any pictures, “says Baer.  The Haller Park is not only popular among tourists and locals, but also to school children from all over the country who come for illustrative environmental lessons.

The park is named after the Swiss naturalist Rene Haller, who was appointed by the cement company in the seventies, to grow food for the local workers. He became intrigued by the abandoned quarry and asked the company to give him a chance to attempt to blow new life into the dead landscape. He planted 26 different tree species in the pits in the hard rock which he filled with soil.

The only species that survived the heat was the Casuarina, an Australian conifer. The trees shed needle leaves, but nothing else happened because there was no living creature to make compost out of it.  By coincidence Haller discovered that the red-legged centipede loved the needles. He introduced them to the pit after which the thick, shiny animals eagerly pounced on the needles, and in no time made humus of them. That was the first layer of soil on the barren plain.

“After forty years there is about fifteen centimetres earth here,” says Baer while she jumps over a trunk that is blocking the path. “We had a good rainy season so the soil is very wet. The roots of some trees do not have enough grips on the thin soil layer and fall. There is much good happening here but it is still a fragile environment “.

Haller planted in total over one million trees. The highest are still the Australian pines but they are now mostly surrounded by native vegetation. In the ecological succession that is taking place more and more animals, from small to large, have also found a home in the park.

A leopard tortoise is slowly emerging from the bushes. The animal retracts its head under the shield as it notices people. But after a few minutes it starts to eat from low-hanging leaves on a bush. It is not the intention of the Haller Park to make it into a zoo. The animals all have a function in the sophisticated system that is required to keep biodiversity in balance and to strengthen it. The droppings serve as fertilizer while other animals transport seeds that provide new flora. “We do occasionally act as a shelter for animals with which people just do not know what to do. We currently offer a home to more than 30 endangered species. Sometimes they flourish too well as for instance the waterbuck. They multiply so quickly and we actually have too many. We are especially looking for a new home for the males, “says Baer, ​​pointing to a herd of waterbuck in the middle of a walkway.

The park became world famous with the curious couple Owen and Mzee. In 2004, Owen, a lonely orphan hippo discovered on a nearby beach was brought to the park. The animal adopted Mzee, a giant tortoise some 130 years old then, as a surrogate parent. The pair had to be separated because while Owen grew and gained weight his shows of love became a danger for Mzee. Owen was put in with Cleo, a female hippopotamus. A beautiful relationship emerged but recently Cleo die and Owen is again lonely and unhappy. “I think we can get a partner for him but it all costs money and we need to cut back in the current recession”, explains Baer.

Bamburi Lafarge experiences difficult economic times in Europe and that has an effect on the company in Kenya. If the Cement Company has to to tighten its belt, the same is expected at Haller Park. Baer tries with small projects like a tree nursery and a fish pond to gain some extra money next to the entrance fees. “It is a financially difficult time but we must continue. It is important to get nature back when economic activities have ceased “.

Is nature conservation in Africa ‘a big white lie’   Colorful butterflies flutter in the few rays of sunlight that penetrate the bottom of the humid jungle. At a water hole where two days...