As the village of Wadda awakens to the sound of pigeons, chickens and donkeys, an old man rides his camel over the sand that has been smoothed by the chilly morning wind. He straightens his turban and looks disapprovingly at the revolutionary slogans on a wall. The youths of this small village in North Darfur renamed it the ‘martyrs’ square’, in memory of a sit-in in 2019 against the then autocratic president Omar al-Bashir in which one of them was killed.

The camel kneels, the man dismounts and introduces himself as one of Wadda’s elders. “Young people are agitators these days,” he grumbles. “We elders have always kept the peace here. Now young people don’t fear to us anymore. That is why blood was spilled in this square.”

There exists a power vacuum in the western Sudanese region of Darfur, on an even bigger scale than in the capital Khartoum, where the conflict revolves around civilian resistance committees against the military coup in October. The conflict in Darfur is more complicated and already started at the beginning of this century. After a peace treaty in 2020, four rebel groups moved into the regional capital of Al Fashir, their leaders were given political positions and their fighters joined the government army of President Abdel Fattah al-Burhan and the allied Rapid Support Forces of Hamdan Dagalo Hemedti. The latter group, popularly known as Janjaweed, which relies on support of Arabized Sudanese and is notorious for its crimes against African Darfuri, seems to be the strongest of all. 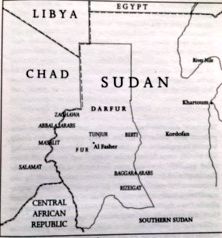 In the marginalized regions of the country, far from the traditional centre of power in the Nile Valley, armed movements, which often represent narrow ethnic interest groups, are claiming their share. Nowhere is the disorder as widespread as in the western Sudanese region of Darfur. As in Khartoum, resistance committees have sprung up in Darfur and people are killed in demonstrations against the old guard. “Darfur was handed over to the rebel groups and militias, and that has led to complete impunity,” says a security specialist in Khartoum. “In addition, with the departure last year of the UN peacekeepers Unamid and the African Union, there is no longer a single force to keep the violence in check.”

In Wadda, a village of 15,000 inhabitants, the elderly who supported Bashir at the time are trying to regain their lost position. “They are trying to reverse everything that young people have achieved since the deposition of Bashir in 2019,” said Huda Adoma of the local resistance committee. He points to the village square. “The family of that man on the camel was involved in the death of our martyr. Like the resistance committees in Khartoum, we demonstrated here for weeks. Then the man’s son and three brothers came. They killed the martyr and stabbed another with a knife.”

To the displeasure of the younger people, the elderly of Wadda want to settle this murder in the village square in the traditional way, by paying ‘blood money’ to the family of the victim.  ”The elderly collaborated with the old regime. Now our time has come. We want justice.” 70 percent of the 45 million Sudanese are under the age of thirty.

Wadda is far from the world of tap water, paved roads, electricity and internet. That’s why it is even more remarkable how politically and culturally aware the young people are after thirty years of strict Islamic dictatorship under Bashir. But the youth are no match for the weapons of the warlords in Darfur. “We have fallen into a bottomless pit after the military coup,” sighs Ibrahim Abdullah, also a member of the resistance committee.

His colleague Rahma Yosif gives him a prod with her elbow to keep him from losing heart. “Certainly, the politics of Sudan are depressing and certainly here,” she says, “but we in the resistance committees are fighting for much more. There must also be a cultural revolution.” Her male supporters nod in agreement. “Sudan’s social problems are far greater than their political ones. In daily life we women have nothing to say and when we do speak out, the elders call us ‘sluts’.”

The overriding problem facing Wadda, and all of Darfur, however, is climate change. This leads to drought, lack of drinking water, impoverishment of the soil, competition for land between the black agricultural population and the Arabized nomads. At the time, instead of dealing with the problems, Bashir sent his army to the black farmers and armed the Janjaweed of the nomadic Arab population to burn their villages. At the height of this conflict, around 2002, an estimated 300,000 people were killed. The International Criminal Court indicted Bashir for genocide. Half of the population of Darfur, more than six million people, has been in need of food aid ever since that war, according to the UN. About two million Darfuri still reside in camps. Last year half a million were added as a result of new conflicts. 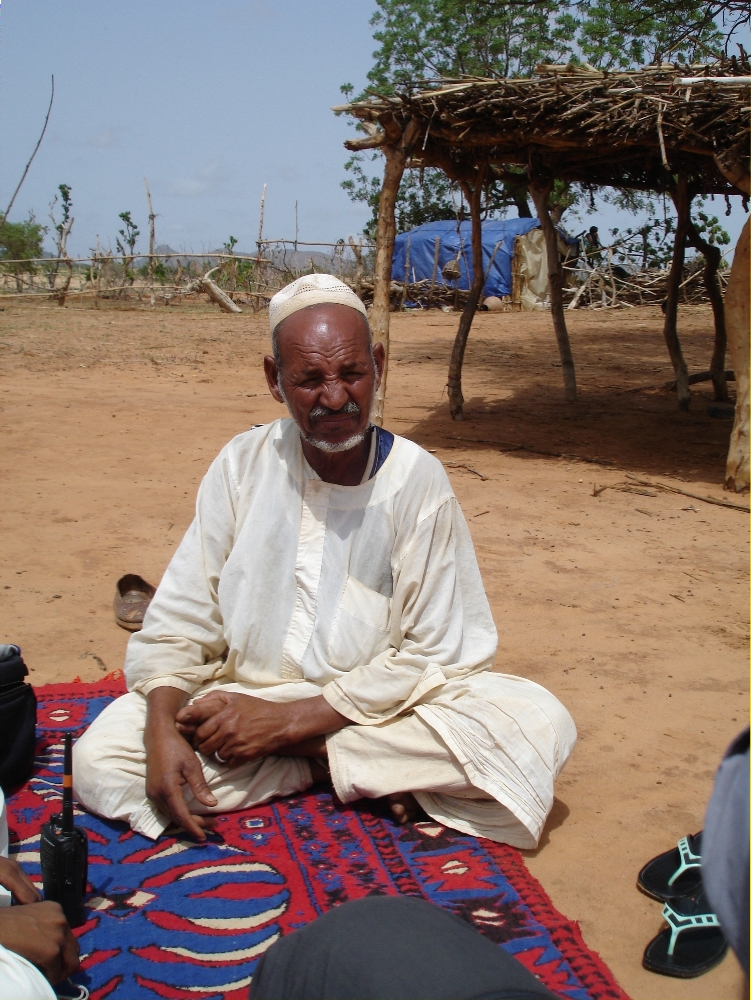 On the plains outside Wadda in the blazing midday sun, trees sink into a mirage. A woman on a donkey cart passes a mass grave from the war in 2003, when a rebel movement occupied the village. Since then, farmers keep more livestock so that with the extra proceeds they can buy weapons for their defence. They burned the dry reeds on their fields to keep the nomads out: traditionally, farmers and nomads made mutual agreements about access to the land, but the poisoned political climate has now led to distrust. “Those damn nomads wash their livestock behind our drainage ditches so we can’t drink the water anymore,” says a man who is digging up the sediment behind an artificial sand wall for when the rains return.

The Sahel, of which Sudan is a part, is one of the fastest warming places in the world – 2 degrees warmer than a century ago, research shows. Shepherds and farmers fight over dwindling resources. “Darfur can no longer handle the population pressure,” says an employee of UNEP, the environmental organization of the UN. In the past enough water remained behind in the creeks, now even the basins do not retain enough water. Until recently, aid organization Save the Children paid citizens with food to dig these types of drainage reservoirs. Now she pays in cash, as all food aid supplies were recently stolen. Development becomes difficult in times of conflict. In the clinic of the same aid organization in the village of Abudialage, nurse Islam Brema weighs a thirteen-month-old child in a washbasin. “Much too light,” he sighs. “And I have nothing to feed her.” Her mother ties the baby on her back and walks back home, 45 kilometers away. Hunger is on the rise: 12 percent of all families in Northern Darfur have at least one severely malnourished child.

A Save the Children employee draws three circles in the sand: two circles opposite facing each other, that of the elderly and that of the young, and a third one called development. “How can we reunite the elderly and the young by working together on development”, he wonders, “because although against the tide we must continue to help the citizens”.

Fatnia Hamad, 11, is sitting on a mat with her mother in Abudialage. The sun is setting, she is exhausted. “I get up at four o’clock, walk to school for two hours and back at the end of the morning. In the afternoon I cover that distance again with the donkey cart for water.” In the morning her mother cannot make tea due to lack of water. Sometimes Fatnia faints at school from fatigue. The mother looks with  a scornful eye at the men sitting separate on another mat, but they say they don’t have time to fetch water. On the way back to Al Fashir, the capital of North Darfur, the driver zigzags in the clouds of dust over tracks skidding left and right. Under the last rays of the sun, the mountain range in the distance takes on erratic shapes, with in the foreground remains of houses of a village destroyed by a land dispute sticking out of the sand like rotten teeth. Whoever wants to avoid kidnapping for ransom here, always takes a different route on the way back. Al Fashir is a den of robbers, full of rampaging militias, government troops, rebels and armed criminals. Trucks with merchandise are robbed every day. At nine o’clock everyone rushes home to get in before the curfew.

The street into the city center is marked by the looted warehouse of the World Food Program warehouses. Seventeen hundred tons of food were lost at the end of December. All food aid in North Darfur came to a standstill. Further down in the city lies the looted former yard of the peacekeeping force Unamid. Generators and cars worth a total of millions of euros were stolen here.

In Al Fashir, each armed group controls its own district. Despite the peace deal, warlords continue to recruit fighters. Sometimes they send them as mercenaries to Libya for extra income.

Darfur’s rebel groups say they are fighting for the black farmers, but most have not controlled areas for long since their formation early this century. The Janjaweed militia is probably the most violent against the population, as it were during the war at the beginning of this century. The former enemies must now ensure an integrated army and return of stolen land, two terms of the peace agreement not yet implemented.

Janjaweed fighters also show up in the heavily guarded office of Governor Nimir Abdel Rahim, leader of a rebel group. “I am a freedom fighter,” the governor emphasizes in a conversation. “As a freedom fighter, I captured general Burhan a long time ago, now the president of Sudan. I often remind him of that,” says Governor Nimir. “If you have defeated someone in a battle, you should no longer see him as an enemy.”

As with Burhan, he is lenient on Janjaweed leader Hamdan Dagalo Hemedti, the second most powerful man in the country. “We have to be careful with those two, they feel unsafe. If they give up their position, they risk losing everything.” Janjaweed leader Hemedti was given a gold mine in Darfur by Bashir.

Nimir is the first one to mention the issue of the major looting in Al Fashir at the end of December. “All soldiers misbehave, including those of my rebel group,” he readily admits. “The bases of former peacekeepers Unamid were looted in several towns elsewhere in Dafur. So my soldiers thought: we can do that too. But the government army and the Janjaweed started it. Tomorrow Burhan and Hemedti are coming to visit me in Al Fashir. We need to discuss how to encamp the armed groups outside the city.”

All the rebel leaders of the peace agreement sided with the military after the coup in October, and not with the protesting civilians. They feel part of the military world of thought, the army is the strongest power factor in the country and offers opportunities for money and looting. They call the civilian protesters “rioters.” “But I remain a freedom fighter”, says Nimir, “I allow the young people in Al Fashir to demonstrate”. They try to do so the next day during Burhan and Hemedti’s visit, but they are arrested and robbed of their mobile phones and shoes.

Two days later, fighting breaks out between a faction of the Janjaweed and a rebel group at Unamid’s apparently not-yet-dismantled base. There are several casualties.

Instability in Kenya: The Perfect Storm Infighting in the Jubilee government of president Uhuru Kenyatta and lack of security will bring heavy wheather for Kenya... South Sudanese run away from their new nation A small van from South Sudan enters Uganda with a group of refugees. All of them are children. “The South Sudanese army stops the men...