After the serious fighting that took place around the fifth independence anniversary of South Sudan on the 9th of July some calm has been restored. But all the parties are sharpening their knives once more. The White Army, traditional Nuer forces, is preparing to march on Juba, former rebel leader and Vice-president Riëk Machar is hiding south of Juba, and the government soldiers with maybe their Ugandan allies are willing to go after him. When the resolution of the Igad Plus countries yesterday to send in peace keeping troops is not implemented soon, it is very likely that there will be another round of fighting soon. 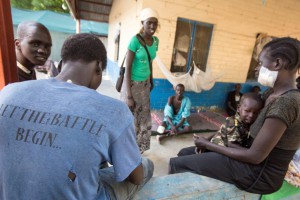 Deeply rooted tribal schism underlies the conflict which flared up in July between on one side President Salva Kiir and his ally, army chief Paul Malong – both belonging to the Dinka ethnic group – and their Nuer rival, Vice President Riek Machar. Under the direction of these leaders South Sudan in the past five years has become a land of hatred and revenge. A young nation that is poisoned by feelings of tribal superiority.


“Dinka’s right,” “left Nuer. Even the signs to the UN camp in Malakal did not hide this tribal xenophobia when thousands of displaced people poured in after the outbreak of the first civil war in December 2013. In a UN camp in the capital Juba Nuers saw as the only solution a last fight to the death with the Dinka.


In a displaced persons camp near Bentiu Dinka and Nuers live strictly separated. Nyakuoth, mother of six children, had just removed the mud that entered last night into her hut of plastic sheeting, when I spoke to her. “The Dinka have destroyed my house. They murder us”, she said. They, that are the government soldiers. Nyakuoth did not dare to go outside the camp. “We will be killed if they do to us that quite terrible thing.” She meant rape.
The deep tribal hatred feeds the atrocities. A South Sudanese aid worker, who lived through the decades-long war of independence against (North) Sudan: “The difference with the war against the Arabs is that the supporters of President Kiir also go the countryside to destroy civilians. A war in which civilians are targeted, is a tribal war”.
Therefore, hospitals are burned down in areas of a rival tribe, are grandmothers being raped and children are slain. From the point of human rights the war in South Sudan has become one of the most brutal conflicts on the continent.

Southern Sudan has for centuries been oppressed and exploited by the Arabized north. From the beginning of 1800 onwards there were two million black slaves sold on the market in the northern capital Khartoum. South Sudanese of diverse tribes live together in an extremely rugged and inaccessible area with hardly any infrastructure and without any modern development. Before the arrival of the Arabs they lived peacefully together but the slave trade distributed that peaceful coexistence.

There were tribal conflicts during the first war against the north (1956-1972) and the second (1983-2003). In the interest of the fight against the common enemy they were however settled. Nevertheless from the two million dead in the second war most were victims of the conflict between South Sudanese themselves.


During the second war in the bush all kinds of opportunistic military alliances were formed, which were solidified by marriages and exchange of livestock. Now Army chief and then warlord Paul Malong dominated his region of Bahr el Ghazal, a dominance that he perpetuated by being godfather (and sponsor) of many young couples. Thus he became godfather of President Salva Kiir. Malong recently paid the bride price for the presidents new young wife. Such clan and tribal commitments determine the dynamics of how South Sudanese deal with each other, how they group themselves during conflict and how political alliances are being formed. “A primitive form of tribalism that barely exists elsewhere in Africa anymore,” says a South Sudanese minister. “That’s because the South Sudanese were separated by the war and lived isolated from the outside world.”


Many generations of South Sudanese have been living in tight tribal structures, and they know only violence with other tribes. “All South Sudanese are traumatized, high to low,” lamented a pastor last year. “Fighting it appears is the only way to get that trauma out of the way.”


This article was first published in NRC Handelsblad on Tuesday, July 12th, 2016