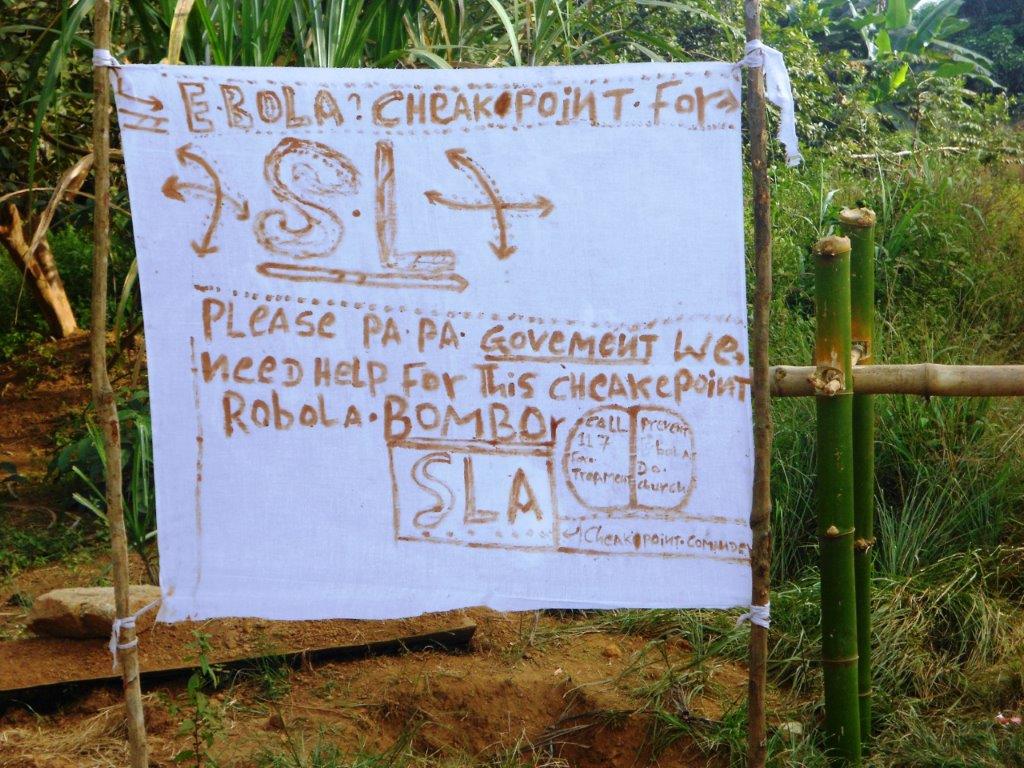 The Covid-19 outbreak started in China. Previous virus outbreaks often only affected Africans. Ebola, Marburg, Lassa, Chitukunja (zika) and the predecessors of HIV, all come from Africa. As population grows rapidly, more and more people break into the jungle. In and around the great Congo Basin in central Africa you will find a bizarre culinary experience in markets; meat from snakes, monkeys, caterpillars, crocodiles and hippos. Viruses jump from animals to humans, HIV passed through apes to humans and bats transferred Ebola.

Spreading germs are a reality that many residents tend to ignore and when they strike, people seek answers in the mystical spiritual world. Usually they consult an unskilled, traditional doctor first. In Bunia doctor Lendunga told me, a victim went to see a bush doctor, who sucked blood from the body near its swollen gland to clear the disease. Unsurprisingly the plague victim, his whole family and the doctor died.

A second problem is that there is a huge disconnect between governments and the population. Political leaders do not listen enough to their subjects so they lack the authority to act effectively in epidemics. With this Corona epidemic in Africa the good news is that experience has been built up through all the previous outbreaks. “Even before the Corona outbreak, many African countries were on the lookout for viruses because they were recently dealing with Ebola,” WHO physician Mary Stephen told me.

Roughly one in three deaths in Africa is usually the result of an infectious disease or a parasite, such as malaria. These epidemics taught Africans lessons. Bonda wote, has been a saying since the Ebola epidemic in Mende, a language in Sierra Leone. Freely translated: the change in manners of everyday life. For example, rural visitors these days report to the village chief as a way of social control.

In large parts of tropical Africa, epidemics are nothing new and that made crisis management more common. For example, radically different patterns of behaviour was called for in the fight against Ebola in Sierra Leone, Liberia and Guinea. That disease started in late 2013 and claimed more than 11,000 victims.

In Guinea Ebola lives in the rainforest and the outbreak began on a day around Christmas time. In the village of a Meliandou a two-year-old toddler, Emile, was playing under a hollow tree filled with bats. Excrement or urine of a bat held the virus and it jumped from the animal world into the human world. The boy died, his mother fell ill and the people of the village carried the virus over the river to Sierra Leone.

Then the virus reached the village of Njala Giema in Sierra Leone. Village elders and members of secret sects influential in West Africa are used to being self-reliant in times of crisis. The Sierra Leonian Chief Musa Kallon managed to control his fear. He was a leader with authority. “In a short time we learned important lessons,” he told me in Njala Giema at the time. “Soon after the outbreak started, I taught my residents not to touch each other or dead bodies or shake hands any more. We took those measures because there were no aid workers helping us.” 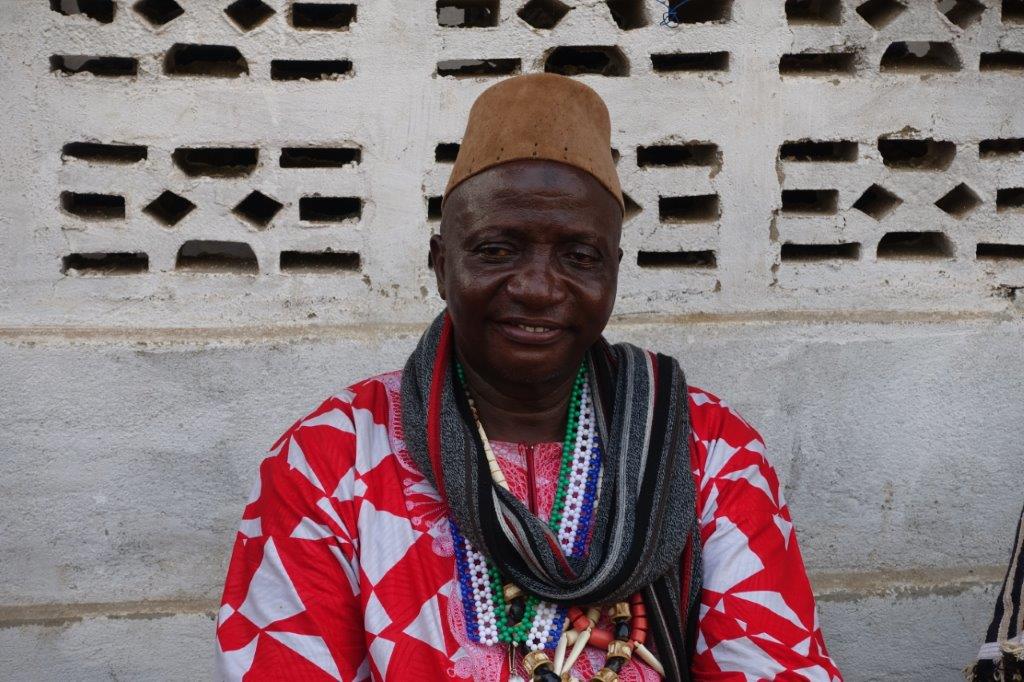 The residents did not yet know Ebola, but they did have experience of Newcastle disease (pseudo-bird flu) and plague in small ruminants. These highly contagious diseases had wiped out entire populations of chickens and goats. Musa Kallon saw the connection, and on his initiative, villagers began to care for the sick and tied plastic bags around their arms and feet. He formed a special unit for safe burials. Only three months after his Ebola mobilization, medical teams and ambulances from the capital arrived in his village to transport patients and corpses in safety.

Foday Fornah is a doctor in Sierra Leone who got Ebola in 2015. What did he learn from the epidemic? In 2016, he told me: “Next time, with the knowledge of today, we need residents to take care of their patients at home. Rescuers must give a greater role to our chieftains and members of the secret societies. Because we know ourselves best.” After the Ebola epidemic, the traditional chieftains were given more powers from the government.

An epidemic that pushed the population to even more radical behavioural change was AIDS, a disaster of catastrophic proportions. Worldwide, 43 million people have died since the outbreak in the early 1980s. What colonial administrators and missionaries had for centuries tried in vain to change, AIDS could impose in a relatively short time. A new, smaller family structure with new sexual codes and fewer concubines.

Beginning in the early 1980s the AIDS epidemic gradually spread widely in sub-Saharan Africa. In 1995 on a trip to cover AIDS, I heard in the Zambian capital, Lusaka, that according to official data, one in four adults would  die of AIDS in the next five years. The AIDS virus spread quickly in highly urbanized Zambia and became the most common cause of death among adults. 24 percent of the pregnant women who reported to clinics were infected. Virtually every Zambian family hosted at least one AIDS orphan. Of the 150 members in the Parliament a third died by 1991, presumably from AIDS. And every day four to five hundred new HIV-positive cases were added. Barclays had to stop a program to educate their young staff because they kept on dying of AIDS related illnesses. The catastrophic disaster unfolded almost silently.

AIDS offered the continent the stark choice: either the epidemic would wipe out a considerable part of the population or a social and cultural revolution would bring it under control. AIDS had ceased to be just a health problem. It affected all ranks of society and changed long-held behaviours. Today there is post-natal care for infected mothers and even homosexuality can be discussed. Unrestrained polygamy has come to an end. Condom use is now standard.

As with AIDS and Ebola, the Corona virus is now threatening Africa with yet another imminent disaster. It is still the least affected continent but there are fears that because of the weak infrastructure the epidemic may have drastic economic and social consequences.

For once a new and terrible disease did not start in Africa. Many African governments took swift action and implemented a partial or total lockdown. Fever measurements at airports have been standard for a long time air flights were quickly halted. In Kenya, the government is hammering away the gospel of keeping distance from others and a nightly curfew has been put in place. The mega cities Lagos and Abuja in Nigeria have been completely locked down.

But the Corona pandemic mercilessly exposes the great social inequality in Africa. The measures met with resistance by many poor people. In the richer parts of Nairobi, everyone stands disciplined two meters apart and everyone is home before curfew. But in the poorer working-class areas, with 70 percent of the urban population, residents live in one living room with the whole family. The markets have remained open.

Slum dwellers easily dismiss the measures. “We cannot follow the orders of the government,” says Robert Ochola, an activist in Majengo in Nairobi. “We don’t take it seriously because we don’t trust the government…..more important than taking precautions is that you earn something to eat every day. You can’t lock people in their homes in the ghetto.” 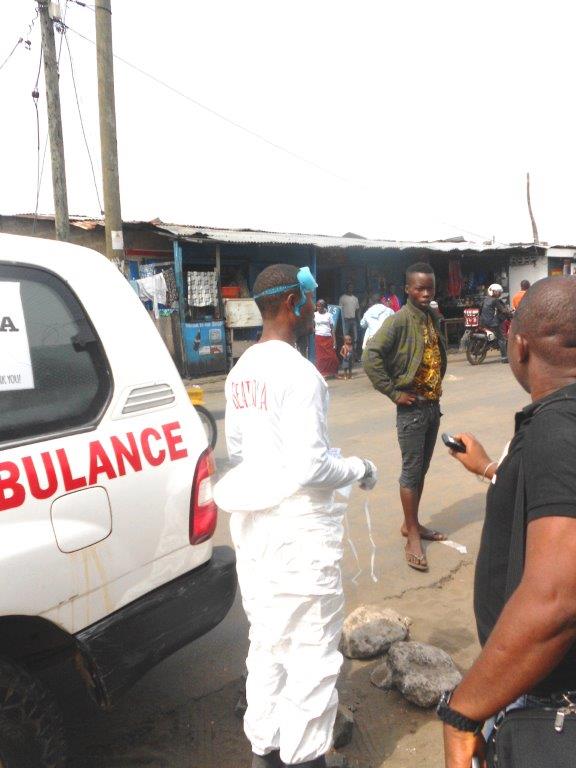 African governments fear social unrest and they take an aggressive approach. “Governments in Africa fear social collapse. And rightly so, because we spit on the arrogance of the leaders”, Ochola continues. “All we see here from the government are policemen with sticks and whips forcing us to stay at home. No, there are no teams to explain to us the situation, nor do they come to feed us, nor do they come  to map out the weaker families are. No, they just send cops to us.”

In West Africa during Ebola, the response of the governments were initially characterized by a militaristic approach. When the Liberian government in 2014 hermetically closed the West Point slum with military personnel and barbed wire, and opened an Ebola treatment centre, an angry crowd gathered at the clinic, letting loose the patients and ripping the bloodstained sheets off the beds.

That aggressive approach did not work. Two weeks later the number of Ebola-infected Liberians skyrocketed. What Ebola taught us is that an alliance between government and their citizens is essential for the control of an epidemic.

Some of the epidemics in the past 40 years

-Yellow fever has been raging in many African countries since 1996.

-Cholera is regularly found in almost all countries.

-Meningitis appeared in different parts of the continent between 1996 and 2007.

-Typhoid was found in Algeria in 1996. A few years later also in Rwanda, Sudan and Guinea Bissau. In 2004 also in Congo.

-The Bubonic plague occurred in Congo in 1994, then also in Mozambique and Zambia.

-Rift Valley in 1998 in Kenya and Mauritania and later in Sudan and Somalia.

-Bird disease regularly in Egypt and also in Nigeria.

This article first appeared in NRC Handelsblad on 2-4-2020

With the cooperation of Ger Steenbergen

What West Africa can learn from earlier outbreaks of ebola in East Africa From ealier outbreaks of ebola in East Africa lessons can be learned... How a village in Sierra Leone fought effectively against Ebola long before the aid workers arrived Villagers in Sierra Leone effectively fought Ebola when the aid workers were not around... The lessons to be learned about fighting ebola The fight against ebola has been addressed incorrectly. What are the lessons to be learned?... Give value to the spirits in the fight against ebola Only the people themselves can stop new infections, but do the fighters agains ebola listen enough to them?... Fear without borders: You are brain-fucking me Fear of ebola: you are brain-fucking me...