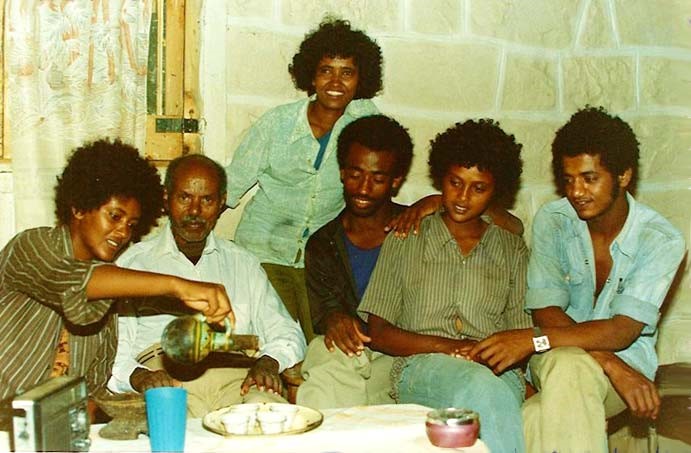 Now I know why a monument has been erected for Alexander Pushkin, the renowned Russian poet, in the heart of Asmara, while the country’s first independence campaigner, one who co-fathered Eritrea alongside Ibrahim Sultan and other nationalists of the 1940s, is brushed aside.

Although my primary objective is to evoke a picture of Eritrea via the story of a unique individual set in an era prior to the armed struggle, I came to realize the portrayal of Woldeab Woldemariam’s story would only cover certain aspects of the history of Eritrea. It does not do justice to those aspects shaped by Sheik Ibrahim Sultan, Tessema Asberom, Abdulkadir Kebire and others.  And then there are those who opposed Woldeab and his fellow campaigners of the Eritrea-for-Eritreans campaign. But they own the other side of the story. This is Woldeab’s.

I would like to make a confession first. The long run towards the finish line was fuelled by passion – the consuming kind.  I consider myself lucky to have survived the journey. I can say I experienced all the basic human emotions while writing – frequent swings of the pendulum between happiness and sadness, fearful of the things I managed to uncover and the commotion they are going to generate, angered by the obstacles I encountered along the way, surprised by the on-and-off progress I was making, and disgusted by my lack of skills in putting the pieces together. The journey was so hard that many a times I had to crawl back into my shell for respite. Looking back, I do not know why I continued to bang my head against a brick wall as the project exposed my weaknesses time and again. Now, after all is said and done, I dare console myself by saying that it takes the truth a little bit longer to cross the finish line.

Eritrea never had an exclusive history that would qualify its citizens to claim a common national or political identity, contrary to what they were made to believe. The Eritrean map and aspects of its identity were more or less shaped by the Italians. However, the gradual build-up to the nationalist struggle came about as a form of reaction to successive foreign occupations. In other words, Eritreans framed and formulated their national identity out of the abusive and unjust experiences they had withstood for decades. That aspect of the country’s history makes it a fascinating subject to examine. Exploring Woldeab Woldemariam’s mindset certainly sheds light on that very fascination.

Woldeab, like his contemporaries, was born and bred during the Italian colonial period.  One can say that he was a product of Italian as well as British rule. Moreover, his education at the Swedish Mission in Eritrea, which laid the moral foundation of his character, gave him grounding in managing his activities against the costly Ethiopian imposition throughout his life.  No one has made such a profound, revolutionary contribution to the independence thought and action. In 1942, he led a small group of people from a visionary stage on to the streets and the political stage the British provided. He lived his campaigns and he tested them to his own detriment in the process.

The account presented in the book I have written shows the significance of a single-minded individual, the power of his ideas as projected via the printed word and his quest for freedom against all odds, prompting the reader to ask a hypothetical question: what would have happened to Eritrea had Woldeab never existed?  What is puzzling is the fact that his vision, which was realised half a century later, sadly missed its mark in the end.

The reason for writing this book is quite straightforward. I had come to realize that young Eritreans have limited knowledge of their history. At school they are taught some aspects of the armed struggle in which their parents’ generation took part and which drove out the Ethiopian occupying army. But they do not know much about the history that paved the way for that costly uprising. Many do not know who Woldeab was, what role he played in shaping Eritrean nationalism and what happened to his vision after liberation.

I, like many of my contemporaries, have always been interested in the story of Woldeab because he was the initial source of my political identity. To me his life and character formed an epic story of adventure, morality, dilemma, contradiction and tragedy.  His thoughts and actions embodied Eritrea’s history of struggle to achieve social and political justice.  The freedom fighters went out into the bush to put into practice what they had learned from Woldeab and his friends.

Although Woldeab went into exile before I was born, I was fascinated by his persona and the aura that surrounded his pursuit of freedom. Did Woldeab calibrate or elevate political consciousness among his countrymen or simply stir up a hornet’s nest?  The reader will be able to reach that conclusion upon reading the account.  When the tide turned against Woldeab and his movement, his name became unmentionable. As far as I am concerned, and in spite of Woldeab becoming a taboo, somehow I became all the more fascinated.

The story starts with an exposé that will catch the reader off guard – material that came my way towards the end of my writing. The urge to share what I found out with the reader at the outset was so pressing I had to start the story with those findings. Furthermore, my plan to juxtapose parts of my own story with that of Woldeab did not go down well with the publisher. So I moved large sections of the introduction to the Author’s Notes at the end of the book. The rest is straightforward – the narrative is designed to take the reader from Woldeab’s early days, filled with hope and vision, through his protracted struggle and sufferings, to his meandering return to Eritrea.

The time it took to write Woldeab’s story was much longer than originally planned because it was not plain sailing for most of the journey. The biggest hurdle was my frustration in dealing with obstructions that led to procrastination. I nearly dropped the project when I found it difficult to obtain crucial information – particularly from some of Woldeab’s immediate family members. Other sources are kept locked in the archive center in Asmara.  Some sources were too apprehensive to speak freely due to the unease and deep divisions the government has created in Eritrean society. In some way it felt as if the world conspired to bury his story after his death.

In the end I began to realize how the EPLF leadership leeched off Woldeab’s reputation and then side-lined him while he was still popular with the Eritrean public. Woldeab had set the world of Eritrean politics in motion in the 1940s and had tried to preserve it when the political factions were at each other’s throats. But he was too honest for the world of Eritrean politics and in his later years was simply discarded and abandoned by the political wayside.

It is ironic that Woldeab, towards the end of his life, said the following: ‘Now I have only one message for the people of Eritrea: Never fight an aggressive war. Live at peace with your neighbours’.  Woldeab died at 11:00 on the morning of 15 May 1995 in Asmara.  Many testified that never in the history of the country had such an impressive and important burial ceremony ever take place. However, after Woldeab’s death Eritrea went to war in the Horn of Africa – against Yemen (1995), Ethiopia (1998-2000) and Djibouti (2008). And sadly, against its youth who are made to flee the country in large numbers on a daily basis.

Eritreans have come to the realization that the revolution failed to deliver the promises made by Woldeab and his comrades. Sadly, Woldeab’s dream emerged broken and emaciated after all is said and done.  But now there is a new hunger to see what the next chapter holds in this post-Woldeab era. “As a journalist and activist in the 1940s and ‘50s, Woldeab Woldemariam is acclaimed by Eritreans as the father of their national movement. Surviving numerous assassination attempts, he not only fashioned Eritreans’ agenda for liberation but also became the finest writer of Tigrinya, the country’s leading language. Woldeab’s persistent and principled appeals to the Eritrean leadership for unity, tolerance and democracy enhanced his popular standing but led to his unjust neglect by the national authorities. Dawit Mesfin’s fine biography at last extends Woldeab the recognition he has long deserved.”
–Alex DeWaal is a writer and researcher on African issues and the Executive Director of the World Peace Foundation

“Dawit Mesfin has produced a biography as brave and iconoclastic as the man himself, rescuing Eritrean nationalist Woldeab Woldemariam from the obscurity that threatened to engulf his life’s work. In the process, he has made an invaluable contribution to Eritrean history.”
–Michela Wrong, author of ‘I didn’t do it for you; how the world used and abused a small African nation’

“This book provides a unique insight into the contribution made by a critically important figure in Eritrea’s long history of asserting its identity as a nation. Woldeab Woldemariam, teacher, journalist, trade unionist and politician is justly called the father of Eritrea. In writing this book Dawit Mesfin has gone a long way towards restoring Woldeab to his rightful place. Using personal documents, interviews with those who knew Woldeab well and by scouring the archives, the author has put together a rich picture of the life and times of an extraordinary figure in Eritrean history.”
–Martin Plaut, Senior Research Fellow at University of London and former BBC Africa News Editor

“Even after death, they tried to silence him. By shining light on the life of this extra ordinary nationalist hero Dawit Mesfin makes a major contribution to Eritrean history.”
–Koert Lindijer, writer and Africa correspondent for NRC Handelsblad

ABOUT THE AUTHOR
DAWIT MESFIN is a writer, veteran commentator on Eritrean affairs and a political activist based in London. He was one of 13 Eritrean academics and professionals who wrote a critical letter to the Eritrean leadership in 2000 calling for improved human rights and met President Isaias Afewerki in Asmara to discuss the issues raised in the letter.