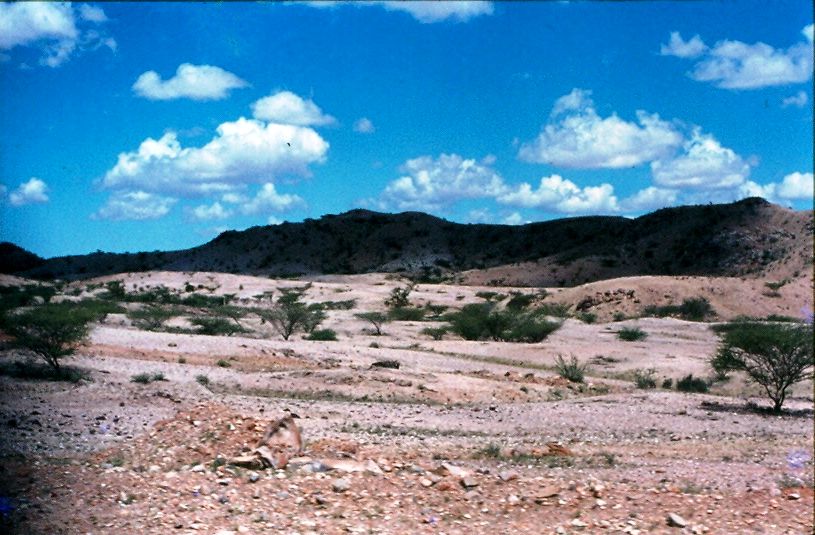 A dark cloud emerges above the cruel landscape of sand, stones, rocks and thorny bushes. On the plains as dry as cardboard live the last hardened cattle nomads. “The pattern of the blood vessels on the intestines of a goat we slaughtered yesterday show that there are still a few showers coming”, the tribal elder Muchu points to the cloud. Muchu belongs to Turkana, tribal people living in this extreme northwestern corner of Kenya around the borders of South Sudan and Ethiopia. Again, the rainy season has failed in most parts of Kenya this year. One drought has come on top of the other, for years now. In inhospitable areas like here, the nomads have come to a standstill because of climate change.

Maybe one car a day travels to the hamlet of Lokamarinyang, there are no roads but tracks. Children with little blubber buttocks pray for food or water, the elderly have protruding chests and legs like sticks. “Look at our mouths”, points an elder to his lip ring. “Did we have tea this morning? Our women and children eat the hides of carcasses”.

A group of slow-moving men sits down on boulders under an acacia tree. They talk about old days. A crisis that started many decades ago has reached its breaking point. It is not just about the devastating drought of 1960, that the Turkana refer to as Namator (“the time when the bones of camels showed themselves”). Or the one of 1980, or of 2011, or the present one. Due to the culmination of the increasingly occurring droughts, life is hardly possible any more in Turkana. “God has lost the key to making rain,” says a man.

The longing for the green past is justified. “There was peace and food, rain and milk. Our parents never complained, they were happy”, says another old man. He points to his bent knees. “The grass was this high then. The dry periods are much longer these days. God barely shows himself anymore. We stare at the horizon in the hope to see a car with food aid.”

Werner Schulting, head of Unicef in Kenya, inspects water pumps and a small food distribution. With a gesture to nearby South Sudan, he says: “The crisis is as serious here as there where there is war. More than half of Turkana children under five years suffer from acute malnutrition, for more than 10 percent of them that is life threatening.” The Turkana district is one of the poorest and most marginalized areas of Kenya. Ninety five percent of the one million Turkana’s live below the poverty line, almost half of the children do not go to school.

The Turkana residential area has been a symbol of hunger and desertification for the last half century. Only the church did something to alleviate the growing misery. The Spanish priest Albert Savans has been working in Turkana for 25 years. “During the current drought, an estimated sixty percent of the cattle died, after the drought in 2011 the flocks had already halved,” he says. “This can’t be sustained any longer. I’ve seen how half of all Turkana’s got stranded, they hang around water wells, trying to grow some vegetables. Nomadism does not pay anymore”. An era has come to an end.
The ecological disaster is not limited to diminishing pastures. With the disappearance of cows, goats and sometimes even camels, fishing in Lake Turkana has become an alternative source of income. But due to the construction of dams in rivers in Kenya and Ethiopia, the largest desert lake in the world is shrinking rapidly. Some hydrologists predict that the inflow will decrease by seventy percent. The discovery a few years ago, of oil and water opens new perspectives. But recent research shows that the giant lake under the Turkana area contains water which is slightly salty, undrinkable to humans and animals.

Philip Ebei said goodbye to his herd after the 1980 drought and went to school. “Since then, I do not know hunger anymore,” he says, “but that way out many of my people cannot find.” He now works for Unicef. Animal husbandry will for the time being remain the main economic activity. “Turkana has to learn to sell his cattle, now he only holds it for prestige”. In other, less dry nomadic areas in Kenya the organization of weekly cattle markets offers a solution to the crisis in nomadism. “We have to make money. Because we only regain our confidence if we can feed ourselves again.”
Overcrowding of people and livestock is the main human contribution to environmental degradation. All men under the acacia have three or four women. Perhaps the men should learn to use condoms? A confusing debate ensues . What is that, a condom? The discussion then goes back to the intestines of the goat which was slaughtered yesterday. “Yes, such thing as the casing of a bowel can be used in sexual intercourse,” says Muchu, the tribal elder, “But these things often stay inside the woman and we do not have doctors here to get them out. And to be honest, in these barren times we miss the strength to copulate.”
It seems that in this dystopian moon landscape there is no place for the outside world, progress feels like a threat. “See how we carry our heads in in our hands,” says an old man, “Let’s not talk anymore, words do not help anymore. The end is near”. The promising dark cloud has in the meantime flowed into Ethiopia, without dropping a drip.

‘Lost boys’ of Sudan may not have been so lost “We were not lost, we were led by SPLM adults. The expression ‘lost boys’ is bullshit.”... A tribute to the rains The pungent smell of raindrops in the dust after a long drought can make a Kenyan lyrical. There is a cacophony of mating sounds in... The graves of Garba Tulla Garba Tulla lies on the vast and mainly dry savanna’s of Northern Kenya. The wounds of a vicious war nearly fifty years ago are still... South Sudan: The hope of a better future lost  The school in Pilieny(Photo Petterik Wiggers) Game Dock had run out of school exercise books for his students some months ago.  He is a teacher... The invading cows can’t be stopped anymore The gate stands wide open and the fence is destroyed on this normally heavily guarded farm. At the entrance there are some empty cartridges. No...