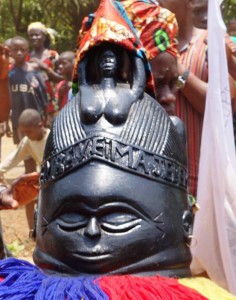 Devils dance madly among the rattling inhabitants of the village of Njala Giema in Sierra Leone. The spirits, who are masked and draped with colourful strings of beads, press their pelvises suggestively against the visitors to welcome them. These rainforests where the three borders of Sierra Leone, Liberia and Guinea meet, formed the epicentre of the Ebola epidemic which swept across West Africa from the end of 2013, killing 11,300 people.

The epidemic is still not completely under control. But residents of Njala Giema managed to bring the disease under control long before international aid workers dressed in moon suits took action.

What did the locals do right, what did the foreigners do wrong? How can Sierra Leone better defend itself against a possible future epidemic? With these questions in mind, researchers from the universities of Wageningen in the Netherlands and Njala in Sierra Leone travelled to Njala Giema. With financial support from the Dutch Ministry of Foreign Affairs they want to research and learn lessons of the indigenous response to the Ebola epidemic, because the international response fell so far short in what was needed.

The welcome ritual belongs the visible world. But who hide behind those devil masks? These are the invisible village leaders. The ancient secret societies in the rainforests of West Africa maintain a parallel power structure, an essential part of the daily management of a well-organized society. But invisible to anyone outside of the village. 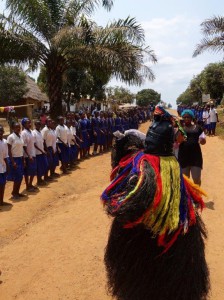 This morning the spirit of an old village man departed this earth. Although everybody is aware of this nobody weeps because his death is not yet official. First, the chief Musa Kallon and members of the secret society will perform the proper rites, so that the deceased makes a peaceful transition to the afterlife. Without touching the body an Ebola test is taken. “That lesson we have learned,” said Musa Kallon. “Soon after the beginning of the outbreak, I told my people not to touch dead bodies and not to shake hands. We took those measures because there were no aid workers. “ 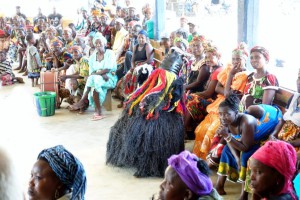 Today in the community hall the villagers perform a play that will show how the epidemic struck Njala Giema. Tears appear in the eyes of the chief when weeping women throw themselves on a fictional Ebola corpse. Musa Kallon’s wife was one of the first victims. Spectators look sombre, the devil dancers do not move, the play has become real. The village has 500 inhabitants, 89 were in 2014 infected by Ebola, of whom 68 died.

The epidemic began in late 2013. The Ebola virus originates in the rainforest. Around Christmas time, a two-year old toddler Emile in Meliandou village in Guinea played under a hollow tree with bats. Via their excrement the virus jumped from the animal to the human world. The boy died, his mother fell ill, people in their village crossed the river to Sierra Leone, arriving in the village Kpondu.

On a day in March 2014, Finda Nyuma, a traditional healer in Kpondu, sat listlessly under a mango tree. “She always chatted nineteen to the dozen, we wondered why she didn’t want to talk anymore,” say the residents. “The next day she did not answer and died.”

She was the only person you could go to with mysterious illnesses and complaints. She was a respected resident so everyone wept. In their grief, many threw themselves on her body. And it was in that way that 24 people in Kpondu caught Ebola and died. They were the first victims in Sierra Leone, but no one knew that then.

The fear struck hard. “Everyone around me was dead,” the young Samson says in Kpondu. He shows wounds on his arms and legs. He stares through red eyes. “I went mad and the villagers tied me up for weeks.” The heavily traumatized Samson can no longer care for himself. He is one of the many post-Ebola victims; not a victim of the virus, but traumatized by what the virus wrought.

Ngundu Sukila contracted Ebola taking care of his sick brother. He survived. The Ebola epidemic in West Africa was the first outbreak of this scale, and it allowed new insights. It has become clear that some survivors experience serious symptoms months after healing. “I feel intense pain in my eyes and stomach,” says Sukila. “And sometimes I fall asleep in the middle of a conversation.” Remnants of the virus appear to hide in the body, in the eyes, brains and sperm.

Poor and marginalized communities offer fertile ground for both civil wars and epidemics. The triangle that formed the epicentre of the epidemic hosted a rebellion against central government in the capital Freetown, which broke out in 1991. It became one of the most brutal wars in recent African history. The roads are sand eroded paths through the woods, weeds climb over the ruins of war in rundown villages. Toilets are a luxury here, social security a dream.

“We have no hospitals and ambulances,” complain the residents. “Where can we go if diseases break out? No one in far-away Freetown knows our fate, no one cares about us”. Sukila has to pay for the drugs for his stinging headaches in the only clinic in the area. “I’m all alone,” he complains.

A nurse called Mercy had died

A nurse called Mercy was working in a small health center in the area of Kpondu. When she heard of the mysterious deaths, she decided to help, caught ebola and brought the disease to her village Njala Giema, a three hours’ drive away. And the virus spread further and further.

In the play in Njala Giema’s village hall a man brings his sick wife to the forest to treat her in isolation, using local herbs. Without touching her. Residents did not know about Ebola, but they had experience with smallpox and other highly contagious diseases among their flocks of chickens and goats. Headman Musa Kallon made the logical link and, acting on his initiative, ensured villagers caring for the sick tied plastic bags around their arms and feet. He formed a special unit to handle funerals. Volunteers launched an hygiene information campaign and told residents they had to isolate villagers with suspected symptoms. 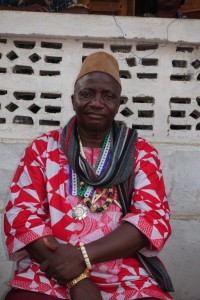 The play has ended and a smile appears again on the face of the chief. “Now that the bones are buried, I hope that our ancestors are pleased with us. If zika comes here one day, we are ready for it.”

Three months after the mobilization against Ebola the first medical teams and ambulances from Freetown arrived in his village to transfer patients and dead bodies safely. But the atmosphere of mistrust meant the first official response by the government was met with fear and anger. An ambulance blaring with sirens was stoned by villagers who thought that medical staff were bringing them Ebola. In another village, residents believed a woman who was told by a snake that the epidemic was the revenge of angry ancestors.

By then the epidemic had already spread from the countryside to the cities. The governments of the three affected countries Sierra Leone, Liberia and Guinea responded with a quasi-military approach. They locked down urban neighbourhoods and districts, patients disappeared behind barbed wire in terrifying camps, hospitals and schools closed their doors. To the disgust of the population in Liberia bodies were cremated. Locals believe cremation leaves the souls of the dead angrily roaming, unable to reach heaven. Rural dwellers were not given protective equipment for home care. They were not involved in the official response and that caused bad blood in the fight against the epidemic 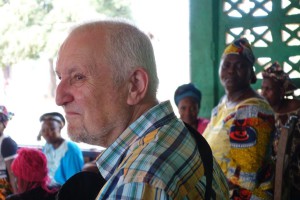 British anthropologist and professor Emeritus Paul Richards, who has been working in Sierra Leone since 1977, is part of the research team from the University of Njala. According to Richards rural residents were already seeing results in the fight against the deadly disease long before the international response.

“They understood that touching corpses and victims was a high risk. But how can you let your loved ones go unburied. So they asked Freetown for plastic gloves, but that assistance did not come. What do you do if your deceased relatives lie rotting in your village? They organized their own burial teams. In rural areas in August 2014 the peak of the epidemic had already passed, many of the local initiatives were effective. We have to draw lessons from that experience. “

Looking back on the ineffective response there has been a great deal of criticism of foreign aid workers who went to work without knowledge of the local culture, of failing local governments, of a painfully slow and bureaucratic reaction by the World Health Organization (WHO). And of the media which fell prey to panic and propagated half-truths.

“In the panic of the beginning, everyone made mistakes,” says Richards. He blames himself for not having done enough research into the role of the funerals in the spread of the epidemic. “Wrongly it had been assumed that the funerals were the source of infection. When the government forbade residents to bury their loved ones that encouraged opposition to the purely medical approach to the epidemic. It turned out that it was not the burial itself, but what happened immediately after death that was the source of infection. “

All hospitals in Sierra Leone remained closed for a year. Pregnant women with delivery problems died as well as patients with easy to treat injuries. It is estimated that for every Ebola victim three other patients died because of lack of medical care.

The only hospital in the country that continued to function was the hospital run by the Dutch Lion Heart Foundation in Yele. When its doctor Erdi Huizinga was suspected of Ebola in September 2014 she was evacuated to the Netherlands, but was found to have malaria. Now she is back in Yele. Five people from her medical staff were infected, four of whom died.

Her colleague Foday Fornah had taken urine from a sick woman in Yele. Protective equipment was not available there yet. A few days later Foday developed a severe fever and was taken to a regional Ebola centre. Foday survived. “I felt as though I had malaria ten times. I could barely hear, and did not know whether there was sunlight or darkness. I could not communicate anymore; I was all alone. But I could still muster the strength to hope. And forced myself to walk one or two meters every day, to sweat out the disease. “

Under the new health guidelines, sex is out of the question for at least six months. Foday Fornah spent six months sleeping on the floor next to his wife’s bed. After his illness he regained his spiritual strength by taking care of other Ebola patients in the hospital at Yele.

What has he learned from the epidemic? “With the today’s knowledge, next time we should let people take care of their sick themselves at home. The aid workers should give a greater role to our chiefs and to members of the secret societies. For we know ourselves what is best. 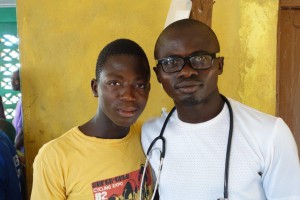 This article first appeared in NRC Handelsblad on 9-4-2016

The lessons to be learned about fighting ebola The fight against ebola has been addressed incorrectly. What are the lessons to be learned?... Epidemics are never far away in Africa Sierra Leone 2014″Have any rats been spotted here?”, Dr. Lendunga asked the residents and pointed to a grove of banana trees and a smelly pool... What West Africa can learn from earlier outbreaks of ebola in East Africa From ealier outbreaks of ebola in East Africa lessons can be learned... Sierra Leone, a place in the forest called Rogbonko "When we go to the African continent, we go back to Mother Earth. And that return must be a warm welcome. It can be reflected... Give value to the spirits in the fight against ebola Only the people themselves can stop new infections, but do the fighters agains ebola listen enough to them?...