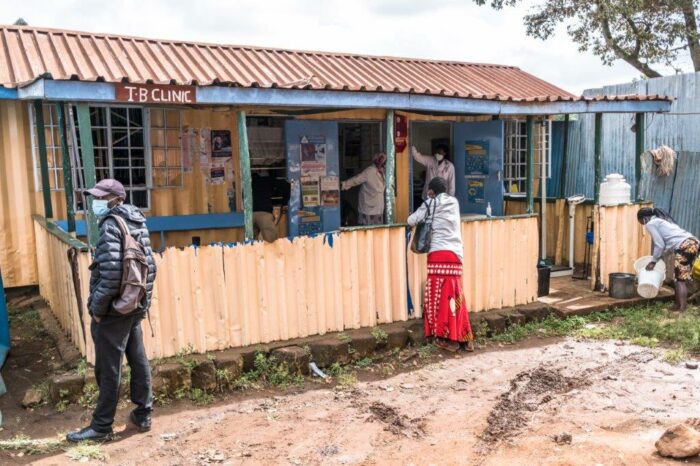 “Without a job, you die here” says Martin Maina (38) in the Kibera slum in the Kenyan capital Nairobi. Leaning against the earthen wall of his house, he tells how last year, during the first corona wave, he not only lost his job in a bar, but also got tuberculosis and became seriously ill. “My end seemed in sight. I could no longer stand on my feet, the community clinic was closed and I had no money to go to a hospital.” A bed and a plastic chair are Martin’s only possessions.

A good Samaritan, working in the closed community clinic, rescued Martin, took him to the hospital, gave him medicine, 25 euros for the monthly rent and even a mattress. He also got money to go to the public toilet in Kibera, because he lives so close to a busy alley that he can’t, as is often the case here, put his needs in a plastic bag and throw it over the fence. 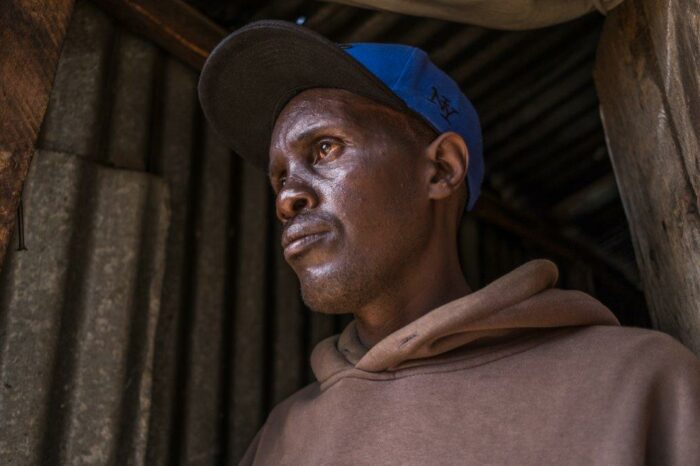 Martin once more goes to the now reopened clinic to get his medicines. He then has to jump over a little stream filled with garbage, past women who hang clothes over the line and toddlers who defecate in the water behind a clump of plastic.

Sarah Chandi, in her thirties, is chief nurse at the neighborhood clinic and charged with TB control. “We have lost sight of many TB patients because of corona,” she says. “Tuberculosis kills thirty to forty thousand Kenyans every year, much more than because of corona. People with a cough are afraid to come to the clinic, for fear of being mistaken for a corona patient and as a consequence having to isolate themselves. In this clinic alone, the number of tests has been halved. I sometimes wonder why corona gets so much more attention than tuberculosis, because that is still the largest epidemic in Africa.”

Not only is healthcare system under pressure from Covid in Kenya, this is also the case elsewhere in Africa. According to figures from the Global Fund, the worldwide fund to fight AIDS, malaria and TB, corona is the biggest setback in 20 years in the fight against these older, endemic epidemics.

In 2020, there were 22 percent fewer HIV tests performed in Africa, which equates to 30 million people who have not been tested for HIV. The number of people tested and treated for tuberculosis fell by 18 percent, or about one million untreated patients since 2020.

Kenya got off to a good start when the first corona cases from Europe were identified in March last year. The country was locked down and Nairobi went into lockdown. But the government lacked the resources to strictly enforce these measures. Tens of thousands of residents managed to illegally escape from the capital via what is called ‘rat routes’ in Kiswahili, and brought corona to the countryside. And there the government has much less control over what the population does.

Songa Rota, a village in Western Kenya near Lake Victoria, is one of those places where epidemics hit hard for the largely poor population. This has been the case since HIV: more than 16 percent of the population here is positive.

The soil is fertile near Songa Rota. Herons peck in the rice fields, noisy ibises ask for attention. But for Maureen (24) who had just given birth, it “felt like I had ended up in hell.”

She tells her story under the avocado tree near the clinic, an elongated building on the edge of the hamlet. “I felt so insecure during my pregnancy. At first I couldn’t go to the clinic and later I didn’t dare to go there anymore.”

More than 8 percent of children in Songa Rota are born with HIV, a much higher percentage than elsewhere in the country. Last year, Songa Rota saw an 8 to 10 percent increase in HIV transmission from pregnant mothers to their babies. “What will become of my baby?” muses Maureen, who is HIV positive herself. The resolute Auma Apull (54) works as a volunteer in Songa Rota. “When corona came, HIV-positive residents could no longer collect their medicines. I’ve accomplished so much with my work over the years, and now I see it all breaking down,” she says sadly.

She gestures to Maureen. „I was not allowed to visit her, because everyone had to stay at home. My passion is to help people. At first we thought TB was the biggest epidemic to ever hit us. Then came HIV thirty years ago. And now corona again. Everyone is scared and thinks, ‘Is this ever going to end?’”

Kenya has more than 86,000 health care volunteers, mostly middle-aged, such as Auma Apull. They receive a meagre salary of the equivalent of 25 euros per month and for that they visit the houses in slums and in the countryside to check for all kinds of diseases. Their only equipment is an umbrella and a notebook.

Only 27 percent of health care providers in Africa have been fully vaccinated against corona, leaving most of the workforce on the front lines unprotected against the pandemic, preliminary figures from the World Health Organization (WHO) show. “At the beginning of corona we didn’t even have plastic gloves, mouth caps and liquid soap.”

The closing of the informal sector of the economy to contain corona, paradoxically also led to health damage. People were deprived of their income, domestic violence increased. As schools closed, schoolgirls were more at risk of rape, leading to an increase in HIV infections among schoolchildren, according to Kenyan newspapers.

Marylene Akinyi (24) hugs her three-month-old baby, Princes Sasha, named after the daughter of ex-President Obama, whose father was born in Western Kenya, under the avocado tree. “I got pregnant because the school was closed,” she says in a trembling voice. She nervously plucks at the threads of her frayed hat. “My boyfriend, who took care of me, impregnated me, but now he doesn’t want to hear from me anymore. He destroyed my life.” 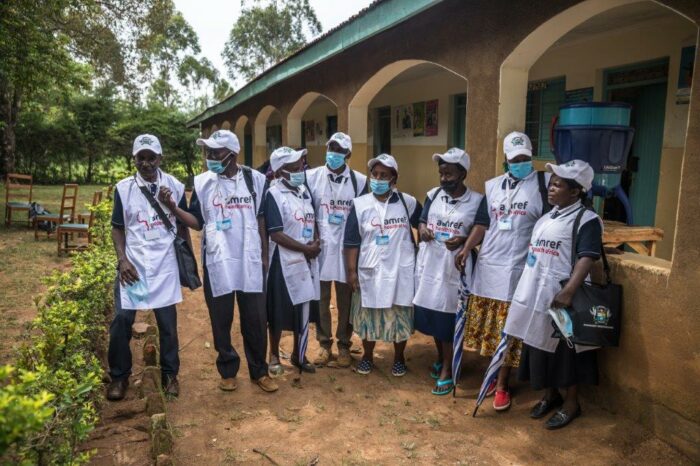 Africa is more used to epidemics than Europe. It knows how to fight them, but doesn’t always have the resources and infrastructure to do it quickly. And that entails a risk, emphasizes Tobias Rinke de Wit, professor of molecular biology at the Institute of Global Health at the University of Amsterdam.

For years he has been researching HIV in Africa, including West Kenya. If the continent lags behind in the fight against corona, it will give mutations of the virus a tailwind, he says – especially in people with weakened immune systems, such as HIV patients. “Due to a weakened immune system, the coronavirus can mutate more quickly in an HIV patient.” As with HIV/AIDS at the time, Africa is now lagging far behind in the fight against corona. Six percent of Africa’s residents are now vaccinated, compared to about 70 percent of those in rich countries. The causes are many. Lack of vaccines still plays a role, including a shortage of the right injection needles or the fact that countries have not set up adequate vaccination campaigns. Donated vaccines are sometimes so close to expiration that countries have to destroy them.

“During the AIDS epidemic in the 1990s, it took many years before the drugs were available, long after everyone in the wealthy West could get them,” says Tobias Rinke de Wit. It has contributed to Africa now having about 24 million AIDS deaths. Rinke de Wit: “You now see with corona that the same mistakes are made.” All photo’s by Bernard Otienno/Global Fund.

-5 Marylene Akinyi with her babyPrincess Sasha