They call themselves the male champions. The five ministers from the poor area of Kayole in Nairobi have a double meaning for their name tag. They see themselves as champions in spreading information about family planning. “And we are champions because we all had a vasectomy. We believe that we should not only provide information but also be good examples”, says James Ngugi (56) who is one of the preachers.

Family planning is still in its infancy. Sterilization of men and women is rare. Family planning is entrenched in the constitution but tradition, religion, politics and ignorance constitute major obstacles. In the last few years, however, more and more people appear to take matters into their own hands when determining the number of offspring.

The population in Kenya is growing by a million a year. Especially in rural areas the belief is still that having many children is a good security for old age. Pensions are a rarity and very often not sufficient.  Parents are convinced they have to rely on their offspring. On top of that parents also assume that some of their children would die before adulthood. But today, thanks to improved health care, most children now survive. Alas due to high unemployment many of them fail to secure a job and are not in a position to take care of their parents financially.

Two-thirds of Kenyans depend on crops and livestock for their livelihood. But because of the large families it is increasingly difficult to feed all the children. A farmer’s land is customarily divided among his sons. What accrues to each son is often no bigger than a vegetable garden. The same applies to the livestock.

Religions generally rule out the use of contraceptives and advocate the calendar method for family planning. But the latter turned out to be ineffective in many cases. Politicians urge parents to produce more children. Politics in Kenya runs along tribal lines, the larger a group is the more chance there is to get a share of the national cake. 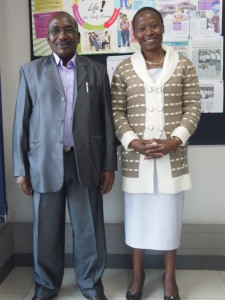 James Ngugi however believes that ignorance is the biggest hurdle for family planning. “People often have no idea how many ways there are for birth control. Old wives tales are often taken as realities. Sex education is part of the lessons to be learnt in general health, but teachers shy away from talking about it. We fill that gap and provide sexual and other health education from the pulpit.”

He and his wife have five children. After the fifth child they came to the conclusion that they are not financially able to care for a sixth. The wife, Leah Njambi went on the pill. “I always lived in fear that I would one day forget the pill. Now my husband is sterilized, I feel free. I’m not worried anymore”, says the 37-year-old.

She also contributes to the education about birth control. Her husband tells anyone with listening ears how pleased he is that he has been sterilized. “Men ask him questions but it is more often the women that come to me. They only want to know one thing, and that is if my husband still performs in bed. I can guarantee that, and also take time to educate them about other methods”, says Leah Njambi with a wink.

The preacher started providing information about birth control after he came into contact with JHPIEGO, an international organization specialized in healthcare for families. In 2010, the organization began a project in Kenya by the name of Tupange, Swahili for: let’s plans. In five major cities, the organization contacted local leaders, community workers and the clergy in poor neighborhoods to spread information on family planning.

Word of mouth spreads quickly through the overcrowded slums where large extended families often live in two room houses which most often do not have running water or electricity. Garbage is picked up sporadically and only a few inhabitants succeed to escape from the poverty.

At the start of Tupange knowledge about and availability of methods was below 50 percent in the five cities. “We hope the coming year to meet our target of 56 percent,” says Nelson Keyonzo, director of the Tupange project. “That does not mean that every city will reach that target. It’s an average. The port city of Mombasa will probably not achieve the goal as the rate was much lower than in other cities.”

One third of the population in Mombasa is Muslim and research shows that women will obtain permission from their husbands before they use birth control methods. While in the Nairobi metropolis quite some women do it without consulting their husbands.  Women seem to be quicker than men to realize that one extra mouth to feed will cause major problems. Women in the capital, who cannot persuade their husbands, often secretly practice birth control. With them the contraceptive injection is very popular.

The health sector in Kenya has improved over the years but is still far from being good. There is a shortage of nurses and doctors. “There are only a hundred doctors who can perform sterilization. The use of coils is limited in Kenya because it is a requirement that none other than a doctor should insert it. It would be so helpful if nurses were allowed to do it”, says Keyonzo.  A coil is a small contraceptive device which is inserted into the womb. It is a form of long-acting reversible contraception. .

Tupange focuses not only on families, but also young people. More than 40 percent of Kenyans are under 15 years old. “It turns out that the teens are becoming sexually active younger and it is important that they are informed,” concludes director Keyonzo. “Sex should be demystified. In schools and families this taboo must be broken. Sex is a normal part of life. ” John Miliza Mahiva (59) left his wife at home. He belongs to the old school and is the boss in his family. He did not ask his wife’s opinion about his intention to undergo sterilization. He just went ahead and did it. “My wife was sick of the pill and also gained a lot of weight. Not a good situation. I am a healthy man with a healthy need but don’t want to have more children. Sterilization was the solution!”

He lives with his wife and five children in Donholm, a poor neighborhood on the outskirts of Nairobi. He has no job and rarely earns enough to meet all the needs of his family.

Since he came into contact with the Tupange project he joined a group of men in his neighborhood who go from door to door to raise awareness on various health issues such as HIV, polio and birth control. He notices that men are much less hesitant about sterilization than their wives. “Women believe that your penis is cut off. I can tell them that I still got everything. ” 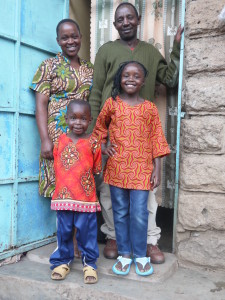 Kaku and Frederick Kavita are still madly in love after more than ten years of marriage. While their children Josephine (10) and Alpha (4) roam outside their modest house, the couple sits close together on the couch. “We both could not go to high school because of the lack of money at home. Even now I am still bitter and sad about it. That should not happen to our children. So we limit ourselves to two”, says Kaku who works as a maid.

They both come from large families. Most of their siblings have a small number of children. “It’s also not an issue with the elders in the extended family. They see that our children have more opportunities than we ever had”, says Frederick who is a driver in Ongata Rongai, a small town just outside of Nairobi.

Kaku is on the contraceptive injection and feels good with it. She had heard through Tupange about the possible methods and discussed the options with her husband. They don’t find it easy to talk about sex but decided it should not be a taboo in their family. “Our parents have certainly not informed us and all we know, we heard from friends,” recalls Frederick. His wife adds: “We have to talk to our children about sex. It is important that they are aware and if the time comes, we will also discuss birth control methods with them.”

Kenya has more than 46 million inhabitants and an average of 4.6 children a woman gives birth in her life.  A third of the population lives in cities. About 70 percent of them live in slums.

Three of the five cities where Tupange is active are Nairobi, Kisumu and Mombasa. The availability and knowledge about contraception at the start of the project was 46 per cent in Nairobi, 44 percent in Kisumu, and in Mombasa 29 percent.

Slightly less than half of Kenyans live below the poverty line of one dollar a day. Primary education is largely subsidized and yet only a quarter of children between the ages 14 and 17 have access to secondary education because there are not enough schools.

The Great Digital Leap Forward in Africa IHub is an oasis of modern order in the otherwise so chaotic Kenyan capital Nairobi. Absorbed on their screens and with headphones strapped on, young...