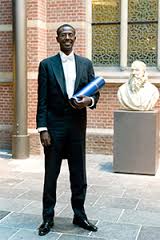 The lion, a symbol of Africa’s raw wilderness, is disappearing rapidly. The number of lions in Kenya stands at 2000, in the seventies there were 20 000, more than half a century ago 100 000.  Less than 20 000 lions remain in the African wild. Tuqa Jirmo Huqa is the first Kenyan who graduated on the subject of lions. Last year in his final dissertation at Leiden University in the Netherlands Jirmo highlights the impact of climate change on wildlife. “There used to be one drought every ten years, now they’re three”, he says.Jirmo works for the Kenya Wildlife Service (KWS), a government organization. He leads a group of 450 armed rangers in the 4000 square kilometer Meru Park. The park differs from other game parks in Kenya because of its dense thickets. “This is what the African savannah looked like a long time ago”, says Jirmo. “The original ecosystem has hardly been affected by invading cattle, tourists and other people.”Humans however transformed the landscapes outside the park. The first major challenge for Meru Park can be seen higher up on the densely populated slopes around Mount Kenya. What is more important: the drug mirra (khat) or wild animals? Rainwater for wildlife on the savannah below is increasingly diverted for cultivation in the highlands for the soft drug. The descending road to the plains of sand and rocks below is surrounded by houses and fields, right to the entrance of Meru Park. An electric fence keeps elephants away from the cornfields. Foreign tourists will pay a hefty $ 70 for a day in the wilderness. 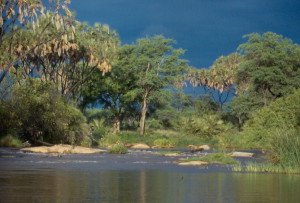 After the fence the world created by men makes way for unspoiled nature, with the sound of chirping birds, screaming monkeys and spluttering hippos. Jirmo focuses his binoculars on a giraffe picking thorny green leaves from treetops. “With those branches you can brush your teeth”, he says. “And you see that tree there? With its fruit you can survive for weeks.”

Because of population growth, land hunger, climate change and the breakdown of traditional governance systems among nomadic peoples, the space for wildlife shrinks. Modernists among conservationists like Jirmo say the national policy for conservation characterized by forced separation of people and animals, has to change. There is a need for ecological corridors in populated areas between the wildlife parks, so that the wild animals can continue to migrate. And sometimes even wild animals have to be transferred by vehicle from one game park to another.

Long before Jirmo went to study the world of wild animals it was familiar territory for him. He was born 43 years ago in the rugged northern part of Kenya to nomadic parents of the Boran people. Like all uncircumcised boys he herded the goats and followed the wild animals in search of water, salt and grass. “Our cattle and wildlife share interests, we both need grass and water, and above all space”, he says. After high school he worked with KWS and also studied biology at the University of Nairobi, to finally enrol for an exchange program in Leiden, where he graduated.

Over washboards like roads, on grassy plains and along water streams lined with palm trees Jirmo drives to the Tana River turned brown by erosion in the highlands. He transports himself in a Grand Tiger, a Chinese made four-wheel-drive car donated by Beijing. (China, because of its economic growth in recent years, has become the largest market for illegal ivory and it tries to fight this bad image by funding nature conservation.) The thick bush only allows dikdiks, waterbuck and buffalo to be seen. Jirmo steps out of his Tiger at the waterfalls named after the famous lion guru, George Adamson. “Yes, maybe Adamson was an old-fashioned romantic”, he admits, “but he sacrificed his life to protect wildlife. Present day rangers can take example from that passion.” 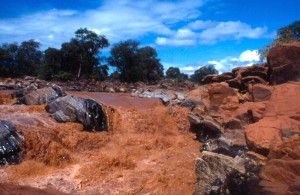 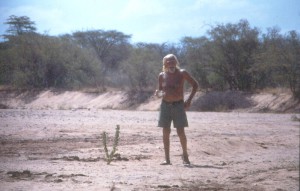 The white Kenyan George Adamson became game warden in 1938, when there were four million Kenyans. He was world famous in the 60′s and 70′s thanks to books, films and TV series such as Born Free, Living Free and For ever free. He put Kenya on the map as the ultimate country to view wildlife. He was killed in 1989 by poachers, when Kenya had 22 million inhabitants.

The job of a park ranger is increasingly on the frontline, facing poachers with modern weapons. “I am faced with even greater challenges than Adamson in his time”, says Jirmo. The official policy at the time of Adamson´s murder was above all to protect the wild animals inside the game parks. Eight percent of Kenya’s soil is reserved for game parks although 70 percent of all wild animals live outside game parks, especially in the areas of cattle nomads. Forcibly separating humans and animals is not sufficient, because wild animals need to migrate. And there is no save way anymore for wildlife because of human settlement outside the game parks.

So the conservationist must look for ways that wild animals and people can live together in the shrinking space outside the parks. “Park rangers increasingly have to do scientific research. The old policy does not work any more, a new approach is needed.”

The concept of national wildlife parks originates from the times when the American Yellowstone Park was established in 1872 to protect against hunters. The Kruger Park founded in 1926 in South Africa was the first on the continent, the Nairobi Park was in 1946 the first one in Kenya while the Meru Park exists since 1966. “Since 1948 no people may live in wildlife parks anymore. And that´s why nomads who share the bush with wildlife feel aggrieved”, Jirmo explains. “Wild animals should be integrated into the daily lives of people.”

Kenya has over fifty game parks. Jirmo did his field research in the southern Amboseli on the border with Tanzania. In his study he focuses on the changing relationship between carnivores and their prey in light of the decreasing population of zebras and gazelles. While in the past the semi-nomadic Maasai lived without friction with wild animals, lions are now attacking their livestock because of the increasing droughts. The Maasai retaliate by poisoning lions.

During Jirmo’s three-year investigation lions moved in the lean years to Tanzania, through an escape route created for them by humans. In the conclusions of his thesis, he proposes such secure routes as a lifeline for Africa’s wildlife, if need be over land borders. In those protective corridors electrical fencing should direct the animals. Residents can earn some money as wildlife guards. He drives to the sides of the Meru Park bordering areas of the nomadic Boran. This side is not fenced. We encounter elephants. The leader puts his trunk in the air to detect us. In the seventies poaching had become so wide spread that Meru Park was closed. Fearing the bullets the elephants moved out.

Security has now improved and the animals have returned. In a migration with dozens of trucks giraffes, rhinos and zebras were moved from other parks to Meru. The runaway elephants returned by themselves, obviously they were aware of the increased security. “It is a miracle how they found out so quickly that the route from and to the park is safe once more. The matriarch of the group and the older elephants determine, based on their memory, whether the coast is clear”, Jirmo explains.

Jirmo attempts to string together small reserves managed by citizens. There is for example an elephant corridor from Mount Kenya to the northern plains beneath a highway. “Because of our new policy on nature conservation outside the parks elephants of Meru Park can now move to the wider area of ​​Northern Kenya”, says Jirmo.

In Jirmo’s vision nomads play a key role in conservation. Maybe he becomes a bit too sentimental when he praises the nomadic existence of his youth. “My Boran people recognize the rights of trees and animals”, he explains. “In the past we checked hunting and for firewood we only cut down the dead branches of a tree.” Nomadism got stuck after the traditional governance system deteriorated. “We must again listen to our wise elders and restore their authority.”
Jirmo roamed with the cows and goats of his father, until by chance he saw a school on one of his trips. He developed a taste for education and gave up his life as a shepherd boy. “Keeping large herds has become too expensive. Nomads build up their herds in the green years only to lose their animals again due to increasing droughts. That is not sustainable”, he says. “We can restore the fragile ecological systems through better stock breeding combined with conservation”, Jirmo argues.

The time has passed when African nature could take care of itself. Kenya’s population is now between 40 and 50 million inhabitants. In order to maintain the wild animals, they need to be managed. Although Jirmo preferably lives in the wilderness, he now wants to move to the artificial world of the capital Nairobi. “With my inborn and intimate knowledge of nature, my field experience as a ranger and my studies at Leiden I am now ready to formulate policy on a national level”, he proudly says. Is nature conservation in Africa ‘a big white lie’   Colorful butterflies flutter in the few rays of sunlight that penetrate the bottom of the humid jungle. At a water hole where two days... Kenyan soccer run by thugs One of the enduring curiosities of Kenya’s sporting scene has been the inability of our national soccer team Harambee Stars to make a mark on... Caroline Mutoko: A Critical Look at Kenyan Media Caroline Mutoko is one of Kenya's most-famous and most-popular radio show hosts. Her highly critical column on the state of Kenyan media was refused by... The invading cows can’t be stopped anymore The gate stands wide open and the fence is destroyed on this normally heavily guarded farm. At the entrance there are some empty cartridges. No...