Go into one of the many new shopping halls in Nairobi and you will be amazed how much Kenya has become part of the global consumer society. The latest computers, mobile phones, honey from Australia, greasy unhealthy hamburgers and brown bread to make you healthy again, everything is for sale. Leave the shopping hall and outside you will be welcomed by huge potholes, traffic jams on bad roads, begging and stealing policemen, dangerous thugs. Between private and public lies a huge gap. Leave Kenya to the private sector and it will be fine, leave it to the greedy inapt government and it will be decay.

Kenya has modernised so much over the last 20 years or so. But it is still so tribal. I don’t know whether there is a contradiction here. After the violent elections in 2007 everybody had his tribal identity reinforced. Not just in rural areas, but also in the cities. Don’t think that only “ignorant rural people” stick to their tribe. Professors and other intellectuals do the same. During the violence five years back every Kenyan was forced to acknowledge that he or she belongs to a certain ethnic group. Because the tribes were at war and one had to take sides. Also during elections it seems your group is under pressure, so you come to its rescue. You can’t be neutral, it seems.

Kenya one of the most modern and one of the most tribal countries of the continent.  Politicians appeal to their own community for votes, telling them it is our time to eat. Does that pose a dilemma for the democracy? When one can’t vote for a certain political program because they are all the same, is it so wrong just to vote for your tribe and region? It is not that much different from Europe or the US, where issues of race and gender can also determine an election. Where a pimple on Obama’s face can make a difference.

I do have a problem with the line of thinking that tribal politics in not so bad for Africa. One of the biggest disasters in Kenya is and was the destruction of the Mau forest by settlers. These settlers came in under the projection of former president Daniel arap Moi, who is a member of the cluster of tribes called the Kalenjin. When Prime Minister Raila Odinga started moving these (Kalenjin) settlers out, most Kalenjins broke away from his party. And few Kalenjins will vote for him this time around. A timely decision to avert a national ecological disaster was turned into tribal politics. That is how a nation will be destroyed.

Tribalism becomes a tool in the divide and rule politics. Big political and economic families like the one of Uhuru Kenyatta or Raila Odinga can hide their economic interest by presenting themselves as tribal leaders.  Big landowners and businessmen like William Ruto can argue their economic sins away by appealing to their role as tribal leader. Efforts to stop impunity by going to the ICC, are being frustrated by tribal leaders saying: our tribe is standing trail in the Hague. Big thieves and even murderers can get away with a lot of crimes by arguing this way.

So, no this type of tribalism does not help Kenya at all. This is not being honestly proud of your culture and background. This is fanatical support for your own group, an allegiance that fragments a nation. This type of politics arises so much passion among the public that the Kenyans can easily come to blows again during this election. 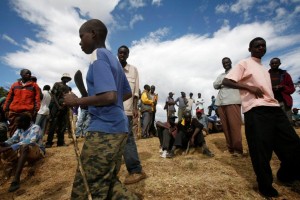 How fear and violence became part of elections in Kenya Women of the Nandi and the Luo no longer want to wash their clothes together in the River of Lions, the river dividing their tribal... Run up to Kenyan elections already bloody Eric Kioko is in seventh heaven. He has been working since the first of January as ‘DJ Talanta’ with the popular radio station Ghetto Radio... Will elections in Kenya be the road to hell again, or a new beginning? President Mwai Kibaki leaves with a $200,000 golden handshake, but what kind of political settlement will he leave in his wake? Everyone is strapped in... Battle against islamism brings back international real politics to Africa Increasingly the way in which the global battle against Islamism is being fought will trump the values for which the West proclaims to stand in... The recurring tribal vote. But what is a tribe in modernising Kenya? The clouds clinging to the highlands near the town of Murang’a, northeast of the capital Nairobi, obscure the view of the sacred mountains. In the...