Ahmed (32) joined the islamic terrorist movement al-Shabaab in neighboring Somalia two years ago. His sister Halima has not heard from him since. “Fortunately,” she says in the Kenyan port city of Mombasa. “Al-Shabaab will only make contact if your family member has arrived in heaven.”

Ahmed is one of the hundreds of young people in Kenya who have become radicalized in recent years. Most come from Mombasa, or from the slums of Nairobi. “Al-Shabaab recruits them to carry out terrorist attacks in Somalia and increasingly in Kenya itself,” says social worker Phyllis Muema. Muema, who heads Kecosce, a group in Mombasa trying to dissuade youngsters from their radical ideas, calls it “an explosive situation.”

Mombasa has become a hotbed of extremism. About a quarter of the Kenyan population is Muslim. Most live at the coast and in the northeast of the country, in the region bordering Somalia. When the first major terrorist attack took place in Kenya – in 1998 by Al-Qaeda on the US Embassy in Nairobi – the perpetrators were merely foreigners. Now Kenya is faced with home-grown Muslim extremism. President Kenyatta labelled this terror recently as “a threat to the survival of the nation”.

Africa is facing a population explosion. In Kenya three-quarters of the population are young people. The result: unemployment, migration, radicalization and criminalization. “The growth of crime and the recruitment of terrorists run parallel. There is a fine line between criminalization and radicalization”, says social worker Sureya Roble Hersi of the network Sisters Without Borders. Without hope of a future, you are prone to extremism. This applies to many millions in Kenyan slums. “In Mombasa militant Islam offers them a way out. In the past Al-Shabaab recruited almost exclusively among the poor and vulnerable, nowadays itis increasingly among educated young people from the middle class. “

Ahmed who departed for Somalia had finished high school and had a good job at a major garage in Mombasa. “After he started visiting the mosque of the radical preacher Aboud Rogo his character changed. He almost never came home anymore”, says his sister Halima. Ahmed started wearing trousers with short legs and grew a beard. He grumbled at America. In his farewell letter he wrote that he went to fight for God in Somalia. “Al-Shabaab donated him a wife before leaving. Ahmed made her pregnant and told us in a letter the child was to be called Fatima or Abubakar”.

A call for prayer echoes in the ancient Arab quarter of Mombasa. Farida Husseini of the Association of Muslim women does her pedicure in a dingy room. She says in the salon: “My organisation goes to schools to make schoolchildren aware of the dangers of Muslim extremism. Once they reacted by shouting at us: “Get out, you have been brainwashed by the Americans. They refused to accept our delicacies saying these sweets were poisoned by the Americans. I was shocked by this radical language. What happened to our children?”

Muslim extremism was long unknown in Kenya. The ´decadent habits´ of white beach tourists did lead to disapproving frowns, but coastal residents always remained tolerant and welcoming. With the advent of terrorism however dissatisfaction set in with the perceived marginalisation of the coastal population. Then radicalism started to germinate.

“After the attack on the US embassy the US started their war on Kenyan territory,” explains social worker Phyllis Muema. American security agents nestled in Mombasa after 1998 to lead in the fight against terrorism. “Muslims were held collectively responsible. A Kenyan policeman knows how to deal with criminals, but he does not know how to fight radicalisation, approaching every young Muslim as a potential enemy. That worked like a boomerang”.

Angry youths were embraced by radical Muslim preachers. Cleric Aboud Rogo (shot in 2013) was their godfather. “Radical groups took over our mosques,” complains imam Sheik Aunla of the National Council of Imams and Preachers. Rogo denounced moderate Muslim leaders in his sermons. “Cowards, I have more respect for armed robbers”, he would tell his audience. “The enemy is among us, strike home in your own country.” In 2002, Rogo was linked to the bombing (13 dead) on an Israeli owned hotel in Mombasa.

Kenyan security agents started secretly to summarily execute radical preachers, while their American colleagues abducted suspects to destinations abroad. Supporters of the radical preachers made it nearly impossible for the police to access their poor neighbourhoods. Finally last year the government shut down radical mosques. “The recruiting for Al-Shabaab is now happening underground. And on Facebook”, says Sheikh Aunla.

Aboud Rogo was assassinated in broad daylight in front of a police station in the Kisauni district. Youngsters now hang around at their ‘base’ in Kisauni. The base, or maskani in sheng (the jargon of the slum), is the assembly point in a poor neighbourhood. It is the place  to play a game of cards, smoke bhangi (marijuana), or to preach the ideology of extremism. Drunken chatter from the bar nearby and rap music from the CD vendor fight for dominance. The stench of gasoline from a garage cannot compete with the smell of bhangi. It is here that young people become radicalized.

“We’re trapped here,” says one boy as he lets bhangi smoke escape from his mouth. “My base is the center of my world. And beyond I see neighbourhoods stinking rich. On television I see corrupt politicians. It’s my neighbourhood against yours. You’re rich because I am poor”.

Muema thinks this means great danger for the future: “The greatest threat of terrorism is still before us. And it comes from the growing number of Kenyan Al-Shabaab fighters. More and more they attack in Kenya”. Outside the traditional Muslim areas young people of all tribes convert to the extreme version of Islam and join the terrorists. In this way also gang members become terrorists. And increasingly women join as well.

Fatima (34) can no longer look anybody in the eye. She hides her face in her hands. Her husband went to fight with Al-Shabaab leaving her with seven children. The same men who had recruited him came to recruit her several months later. “They promised me a job. But when I came to Somalia, Al-Shabaab locked me up. Every day they raped me. Four men did it each and every day. It continued for months.”

She trips over her words. She blinks her eyes. “The recruiters were Kenyans, the rapists Somalis.” A Kenyan helped her escape. For a month she wandered through the bush, until she found a boat to take her to Lamu. Last December, she returned to Mombasa. She is HIV positive. 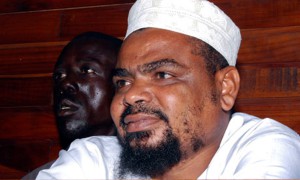 Since the 1998 al-Qaeda attack on the US embassy in Nairobi, an estimated 900 people died in terrorist actions.

Attacks in recent years were carried out by the terrorist group Al-Shabaab, founded around 2007 in Somalia as an ally of Al Qaeda. Since the Kenyan army in 2011 invaded Somalia to fight Al-Shabaab, the group has become more active in Kenya.

After the bombing of the US Embassy (224 deaths) attacks followed on an Israeli owned hotel in Mombasa in 2002 (13 deaths), then the luxury shopping center Westgate in Nairobi in 2013 (over 70 fatalities), followed by the coastal village of Mpeketoni 2014 (more than 60 deaths) and in April last year at a university in Garissa (148 deaths). In 2010 during the World Cup final bombs exploded in cafes in Uganda (76 deaths).

Al-Shabaab in Kenya is active along the islamic coast. In the Northeast the Muslim militants briefly occupy villages to preach in the mosque. “A significant percentage of the Kenyan fighters of Al-Shabaab were recently recruited”, a terror expert said this week in Nairobi.

Recently in Somalia the extremists killed tens of Kenyan soldiers as the group still controls large rural areas in that country. Earlier this month it claimed responsibility for a (failed) bomb attack on a plane departing from Mogadishu.

Kenya coast boiling of anger Islamic radicals and a movement which wants indepence for the coast both exploit anger about marginalisation and youth employment. The Kenyan coast is boiling.... The shooting of Sheikh Rogo Sectarian violence has rocked the Coastal city of Mombasa in Kenya following the shooting dead of a prominent and controversial Muslim activist Sheikh Aboud Rogo.... Recruting for Al Shabaab in Nairobi “I have been telling all of you in my team not to listen to these recruiters for al-Shabaab here in Majengo. They are cheating you,... Somalis in Kenya: How long will the Welcome last? Finger pointing has turned to fist fights as Kenyans visibly becoming frustrated of frequent grenade and small bombs terrorists’ attacks in the Country are turning... How Al Shabaab tears apart Kenya The two towns belong to the same County in northeastern Kenya. Coastal Lamu town with its Muslim population, and the inland Mpeketoni which is predominantly...