Bamako — Huge posters in the capital Bamako tell it all: a map of Mali, tears rolling down the North and the South covered by a big question mark. In the wake of the Tuareg rebellion that began in January, Al Qaida affiliated Islamic extremists have taken control of many but not all towns in the North.

A military coup d’état led by captain Amadou Sanogo against President Toure on March 22 had made the situation worse. Sanogo was quickly forced by the West African regional organisation Ecowas to step down in favour of an interim civilian government, but behind the scenes he is still calling the shots.

“Malians feel very sad”, the famous singer Oumou Sangare told me. She then sang a powerful song: ” We need peace, we need peace to sing and dance”.

Nobody has a clear vision of Mali’s immediate political future and nobody knows how the weak and demoralised national army can take back the North from the well armed and well financed group Al Qaida group Aqmi and their allies, the Ansar Dine, and rebels from the Tuareg .

The country is paralysed. Every day that uncertainty continues in Bamako will be a bonus for the Islamic radicals controlling the north. To a large extent, money is what determines the power relations in the north. Aqmi, which originates in Algeria, has been controlling smuggling routes through the Sahara for many years.

These routes have meant business in that vast area for centuries, but while in the past salt and gold were traded, the commodities are now drugs, weapons and migrants on their way to Europe. The kidnapping of Western tourists is also believed to have earned Aqmi millions of dollars. (Africa Confidential mentions a figure of 130 million US dollar obtained by kidnappings). Part of this income filters back to locals, who don’t see this age old trade necessarily as smuggling. In the Sahara, one way or another, anyone going around there will have to deal one day with Aqmi.

Suddenly there is a huge military advantage for groups of religious extremists in a very large area. The Malian army is, as a military expert says, “a joke”. In the desert, one does not so much control territory, as one does control the people. With lots of money, good business and security, the present rulers are in command, not any state authorities.

The fall in 2011 of Libya’s leader Muamar Gaddafi heralded the dramatic change in the balance of power as Tuareg mercenaries who had served in the Libyan army returned to Mali with very heavy weapons. Every armed group operating in the area could go to Libya to get weapons, since Gaddafi had opened his weapon arsenal and Libyan rebels helped with distributing them.

Tuaregs have been fighting central authority since the beginning of last century.  First it was the French, then after independence against the new government in Bamako. When the National Movement for the Liberation of the Azawad (MNLA) declared an independent state in the North in April, some Tuaregs seemed to have achieved victory. They are seen as liberators in the town of Kidal, where the Tuareg are in the majority. But in other towns like Gao and Tombouctu they were overtaken by the religious zealots of Aqmi and the Islamic Touareg movement Ansar Dine.

MNLA does not seem to have the upper hand anymore. Chahana Takiou, an independent journalist and expert on the Northm says: “Many Tuareg rebels changed side and joined Aqmi, because Aqmi has the money”. Many displaced Malians from the North have complained looting by MNLA fighters. The ones of Aqmi and Ansar Dine are disciplined and try to establish order, but enforce a rigid and not commonly accepted from of salafist islam. Tombs of islamic saints have been destroyed in Tombouctu as well as masks and sculpture of the Dogon.

If the music dies…

Ansar Dine is feared in the capital, where there is no tradition of Islamic extremism.Ousmane Cherif Haidara is the imam of the grand mosque in the area of Banconi.

“We fear for our lives when they will come southwards. There is no authority anymore in Mali. Everybody should be afraid for Ansar Dine, also in neighbouring countries. We are afraid for bomb attacks, like what Boko Haram is doing in Nigeria”. But when asked if he is afraid that even his mosque could be a target, he laughs and says, “No, my mosque is protected by Allah”.

And the singer Oumou Sangare, is she afraid that Mali’s unique musical style is threatened by Ansar Dine? With the same vocal power she uses to sing her songs, she says: “No, our music will never die. If the music dies, the Malians will die”. 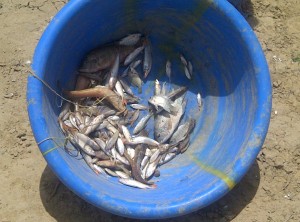 Touareg, scapegoats of Mali’s misery Mohamed Moctar is packing his belongings. There is not much is his room besides a sleeping mat, a blanket, a small sound system, a teapot,... No easy solution for a divided Mali Proud ladies in expensive, colourful costumes ride on mopeds through the blue smoke hanging above the streets of the Malian capital Bamako. The perky presence... Mali conflicts undermine economic growth Horses, cars, donkey carts, motorbikes and pedestrians compete with one another over the limited space on the narrow quay of Mopti. Market stalls, lining the... The Challenges of Retaking Northern Mali Once considered Africa’s flagship of democracy, Mali has turned into a shipwreck of anarchy seemingly overnight.... From Mungo Park to the UN invasion of Mali “Hello mate,” writes Matt in an email. “Welcome! You can come back to the Sleeping Camel. I’ve decided to stay open. Because the UN has...