Nigeria is often in the headlines because of religious conflicts that have cost thousands their lives and displaced many more.  The extremism contrasts with the religious tolerance among the Yoruba, the largest ethnic group in the country. A perfect and common example is the Koiki family.  Eight brothers and sisters are spread over six belief systems and religion is never a point of controversy.

“It does not matter to us how and where you pray. The important thing is that you believe in God which will give you support in life”, says Iyabo who is preparing snacks with one of her sisters in a house in Lagos. There will be a gathering of Muslims from the neighbourhood to commemorate the fifth year of passing on of the father of the family.   He was a deeply religious man, who together with his wife made a pilgrimage to Mecca. Three of his children are Muslim, one is Catholic, another Anglican, two evangelicals, and the oldest belongs to a spiritual movement.

The religious composition of the family may be remarkable but not among the Yoruba. The Koiki children come together when possible to celebrate Christmas as well as the end of Ramadan. But none of them eats pork, clearly a remnant of their Muslim youth.  Iyabo found Islam difficult to fit into her life as a working woman, a widow and mother of five children. “Christians can pray anytime of the day. It’s not restricted to certain times as Islam is. For me it proved to be a lot easier and a reason why I changed to Christianity”. 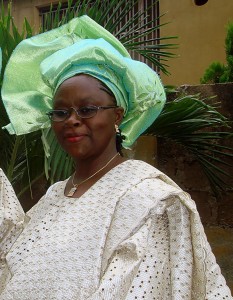 Even before the outbreak of the terror of the radical Islamist movement Boko Haram in the north of the country, there were violent conflicts between Muslims and Christians which mostly occurred in the Middle Belt of the country. Northerners are predominantly Muslims. Majority of the Southerners are Christians, and in the Middle Belt adherents from both religions live. However the religious animosity seems to be fuelled more often than not by regional discord.

The more than 170 million Nigerians are made up of 250 ethnic groups. Although the northern Hausa and Fulani are often put together and labelled as the largest group, they are actually two different ethnic peoples. Take that into consideration then the Yoruba are the largest with 21 percent. They are closely followed by the Igbo and Hausa with 18 percent each, the Fulani with 11 percent and the Ijaw with 10 percent. Slightly more than half of Nigerians live in the northern part of the country. More than 50 percent of Nigerians are Muslim, mostly Sunni. Some 48 percent are Christians and the rest adherents of traditional religions.

The spread of Islam in Nigeria started around the 9th century through trade with Muslims and military conquests. The customs and traditions of the peoples in the North made it easy to incorporate Islam into their way of life.  Christianity only arrived in the 16th century. Missionaries, in the slipstream of European traders, brought it to the South of the country.  The situation would have been completely different had the Christian missionaries ventured into Nigeria through the Trans Sahara route. The North would probably have been predominantly Christian. If on the other hand Islam had arrived in the country through the Trans Atlantic route the peoples in the South would have been predominantly Muslim.

The most famous example of religious tolerance among the Yoruba is the governor of Lagos, Babatunde Fashola. He is a Muslim while his wife is a Christian. Similarly the youngest of the Koiki family is a Muslim and his spouse a Christian. During Ramadan mother and children eat their three meals as always while the father observes the fasting times. His wife though makes sure she gets up early to prepare his breakfast so that he can eat before the day breaks.  She knows the importance as she was raised a Muslim herself.

“It has to do with our culture,” explains Professor Adebola Aiyelabola. “The Yoruba had their own traditional religion but had an open mind and ear for the other religions they encountered during their travels as they are a people of traders”.

In south-western Nigeria, where the Yoruba predominantly live, churches and mosques stand side by side. The only form of competition between the two religious movements is noticeable on Friday afternoon and Sunday morning. During the Friday prayer imams try with powerful speakers to reach as many ears as possible with their sermons. On Sunday pastors, priests, preachers and church choirs of the various Christian denominations battle it out with equally deafening decibels.

Professor Aiyelabola became a preacher after his retirement from regular employment, and founded his own church. He is convinced that his creed is the only correct one, but he accepts that others have different ideas. He knows the Koiki family all his life and fosters admiration for the deceased parents. “Despite their firm belief that Islam is the only true religion, they gave their children entire freedom in finding their own religious path”

Such tolerance could be a weapon against the religious intolerance of Boko Haram, together of course with some sound political decisions and economic uplifting of the North.

New tactics of Nigerian army drives Boko Haram away but keeps the population hostage The helicopter lands on a field that is littered with bullets. We have arrived in Gwoza, an area in northeastern Nigeria where only military vehicles... How Al Shabaab tears apart Kenya The two towns belong to the same County in northeastern Kenya. Coastal Lamu town with its Muslim population, and the inland Mpeketoni which is predominantly... How Islam from the north spreads once more into the Sahel Conservative Islam comes to the Sahel with an unstoppable mission mentality and the way paved by money from Saudi Arabia, Qatar and Pakistan.... Je suis Nigeria If writers and cartoonists use the power of their pens to attack and mock the sincerely held beliefs of the poor and voiceless in society...