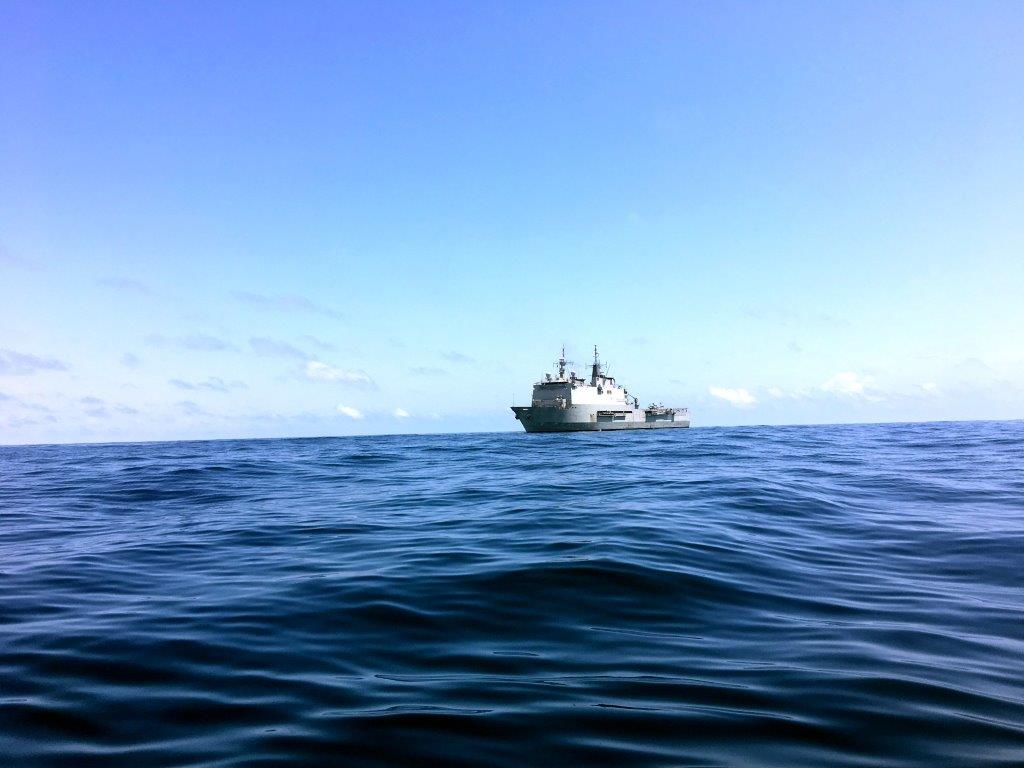 The admiral on the pontoon bridge focuses his binoculars on a speck in the blue-green sea. The Spanish warship the Castilla stops. Special forces climb with a rope ladder on starboard to rubber boats on the high waves and speed away to the wooden fishing boat. It is called a ‘friendly approach’ in the jargon of the anti-pirate operation Atalanta on the Indian Ocean. However, the Somalis on the fishing boat anxiously put their hands in the air.

When boarding, the Spanish soldiers on deck stumble over a shark and a tuna and their shoes get stuck in the nets. “We have a good catch”, head fisherman Hamdi Saleh welcomes them. The eight-person crew dressed in sarongs nods in agreement. “That big ship of yours brings peace,” says Saleh. Everyone gets a T-shirt with the inscription of the European Union’s anti-Pirate brigade, the Navfor. They also get a bottle of water and a carton of cigarettes. The fishermen become at ease. The headman complains about a toothache. After a message to the naval ship another rubber boat arrives with a dentist. He puts on plastic gloves and -in the short stable moments between the waves- inspects the brown teeth of the skipper. Then he gives him some aspirin.

The fishermen light up one cigarette after the other while the soldiers interrogate them. “I have not seen pirates,” says Musa with an innocent face. The Spanish soldiers nod in satisfaction. This is the mandate of the EU’s naval brigade that was set up ten years ago: fighting pirates who hijack tankers and other ships for ransom. The Netherlands deployed ‘the Rotterdam’ for the mission last year. “But there is so much other insecurity here apart from pirates,” Said Musa continues. “At sea you are on your own, you never know who the good and who the bad guys are. Criminals steal our fish, fuel and take our mobile phones”. The EU brigade has no mandate to take action against these forms of crime at sea.

Musa raises his finger to emphasize that he is going to say something important. “Trawlers from all parts of the world come here to empty our fishing grounds. They have heavy weapons on board, yes, sometimes even machine guns.” A crew member supports his argument. “Sometimes they show permission from the Somali government, but we think it’s a forgery. The Somali government is full of crooks”. The Castilla can not act against illegal fishing either. This is the essence of the problem in the crime-ridden Indian Ocean: Somalia has no effective central authority since the outbreak of the civil war in 1991. The country with its 3330 km long coastline is divided into semi-autonomous regions without a management structure for fishing, or an effective coastguard. A failed state. In the past, the rulers of the Puntland region profited from the lucrative piracy. Now they see more benefits in cooperation with Western but also Chinese anti-piracy ships. As a result, the number of attacks by pirates has drastically decreased over the past five years.

“We have contained but not eliminated piracy”, explains admiral Alfonso Pérez de Nanclares on the naval ship. “Between 2008 and 2011, numerous hijackings took place, after that virtually no more. The pirates went into trading weapons, drugs, people and charcoal. However, the capacity for piracy still exists.”

Since ancient times, sea pirates have been classified as ‘hostis humani generis’, enemies of mankind. Around Somalia, hijackers first came into action in 1991 when they hijacked the cargo ship Naviluck, executed three Filipinos and drove the crew overboard. That was the beginning of a lucrative pirate industry and a decadent culture of pirate parties.

Two notorious pirates who were in charge, Boyah and Garaad Mohammed, were both from the fishing village of Eyl. In 2005, Garaad controlled an army of 800 pirates along the coast. In 2009 they hijacked 46 ships, a year later 47. In 2011 they held 700 sailors hostage. In 2008 they received an average ransom of around one and a half million dollars per ship, two years later that was three to four million, with the largest bonus being 9.5 million for the South Korean oil tanker Sambo Dream. As the ransom increased, Garaad and Boyah operated more professionally and with modern equipment up to 1500 kilometers from the coast.

The 10 percent of maritime world trade that passes through the Gulf of Aden was threatened by a few hundred thugs high of the drug qat. Unanimously, all states in the world proclaimed the Somali pirates as a common arch enemy. The Operation Atalanta started in 2008 and was the first maritime mission under EU flag. The deployment of three Chinese warships was the first Chinese mission since 1949 and after half a century of a pacifist policy, Japan and Germany also participated in the operation. Initially the fleets had little success. It was only when the authorities on land began to cooperate and the merchant ships put on armed guards, that the number of hijackings decreased. Last year, pirates undertook several attempts but only in two cases did the pirates manage to climb aboard. No ransom was paid.

Traders from the East
A yellow line announces the Somali coast. The Castilla has been sailing for several days in the Somali waters without having seen light on land. The coastline slants sharply, as if the country rising one hundred meters above the sea was broken off. Traders from the middle and far East arrived more than a thousand years ago with the wind of the monsoon in their sails. In Somalia they found an inexhaustible treasure of cinnamon, frankincense and myrrh. Asian perfume makers deposited large sums of money for small quantities of the fragrant ambergris from stranded whales.

Admiral Alfonso Pérez de Nanclares and his special units have Eyl in their sights today. They want to visit a UN project in the former pirate den about teaching Somalis how to fish. A helicopter takes off from the Castilla to explore the coast while also rubber boats depart, but the high waves keep them away from the beach for some time. Here a few years ago a several mammoth tankers floated, hijacked by the men of Garaad and Boyah. After lengthy negotiations, little planes appeared to drop suitcases full of dollars into the sea. On these waves in 2009 the hijacking of Captain Philips and his Maersk Alabama happened, later filmed with Tom Hanks 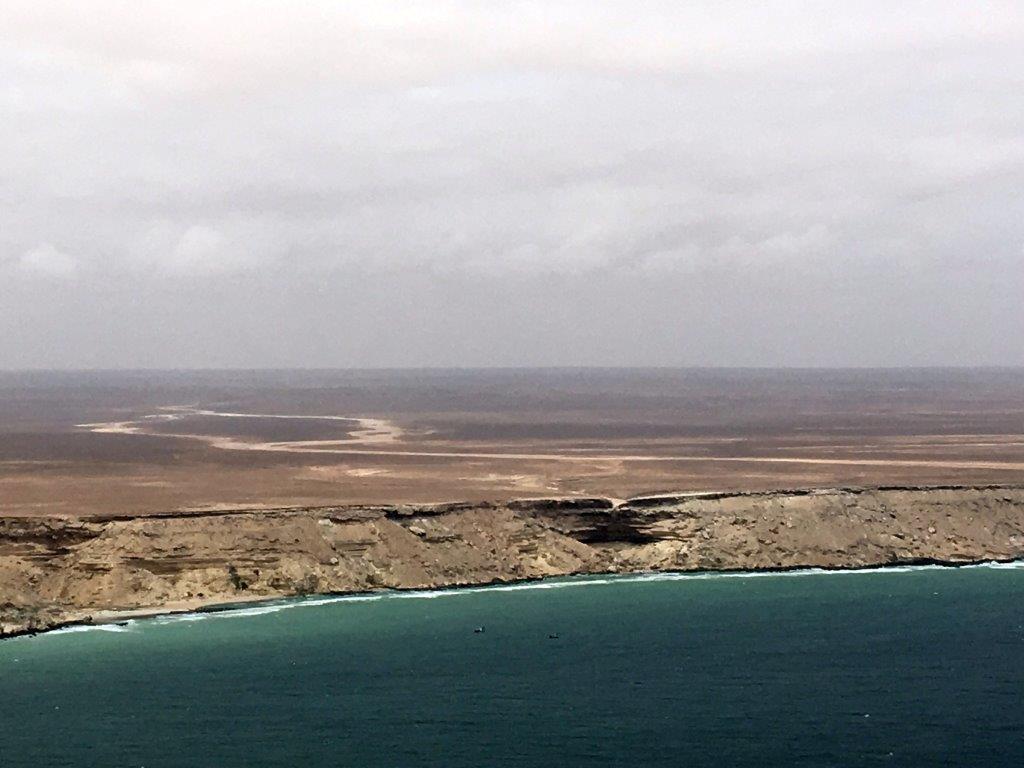 as the leading role.

Once on land, the admiral and his soldiers meet lazy fishermen. Nobody ever admits to have participated in piracy. “Do you know what was the worst, sir? When the hijackers clashed among themselves about the distribution of the ransom,” says the young man Abdi. Without the cooperation of the residents of Eyl, the pirate industry could not have flourished. The hijackings lasted for months and during the negotiations the pirates needed supplies of food and water, as well as portions of the stimulating drug qat. It was the lavish celebrations with drinks and women that eventually led the strict Muslim population to expel the pirates from their village. “We have never benefited from piracy,” Abdi says with a faint smile that masks his lie. What is the alternative to crime at sea?

Surrounded by the soldiers in war gear and the helicopter flying overhead, the admiral visits women cleaning fish on the beach. The UN donated sharp knives, slaughter tables and a boat. “In the past, we never ate fish. The UN taught us that “, says Assia Ayan. She demonstrates how to slaughter a tuna. The then president Siad Barre wanted to modernize the nomadic state and in the seventies and eighties forced the largely livestock Somalis to fish. Twice a week they had to eat fish and he set up a coast guard to protect the rich fishing grounds. However, the population tied to their cows and camels did not see fishing as an honourable profession. Most Somalis do not like fish, but the increasingly frequent drought and the interference of foreign development workers have started to change this.

Fishing is a bigger problem

The residents of Eyl stare at the soldiers and the fish. The young man Abdi looks doubful. “At sea you give us a T-shirt and a bottle of water and on land a knife to cut fish”, he snorts, “you think we can be convinced that easily”. An older man gently pushes him aside and takes the floor. “Why do you not set up a coast guard to protect us?” He argues. “Your problem is piracy, our problem is illegal fishing. And you do not do anything about that. ”

It is estimated that fish worth $ 200 million are stolen every year in Somali territorial waters.

On the way back to the Castilla, the sea has become wild and the admiral has to get up till his shoulders into the water to get the rubber boat into the sea. Surrounded by flying fish, the Somali skiffs cut easily through the high waves though. The navy ship had whales visiting and dolphins are diving against the sunset. Then there is excitement. There is news about a failed hijacking, the first in many months.

At 480 kilometers from the Castilla a skiff shot at a ship that fired back. “It happened in a part of the sea full of weapons and drugs smuggling,” the commander says. “It is an ideal area for terrorists. We can be on the spot in 24 hours”. Operation Atalanta has been extended until the end of 2020. 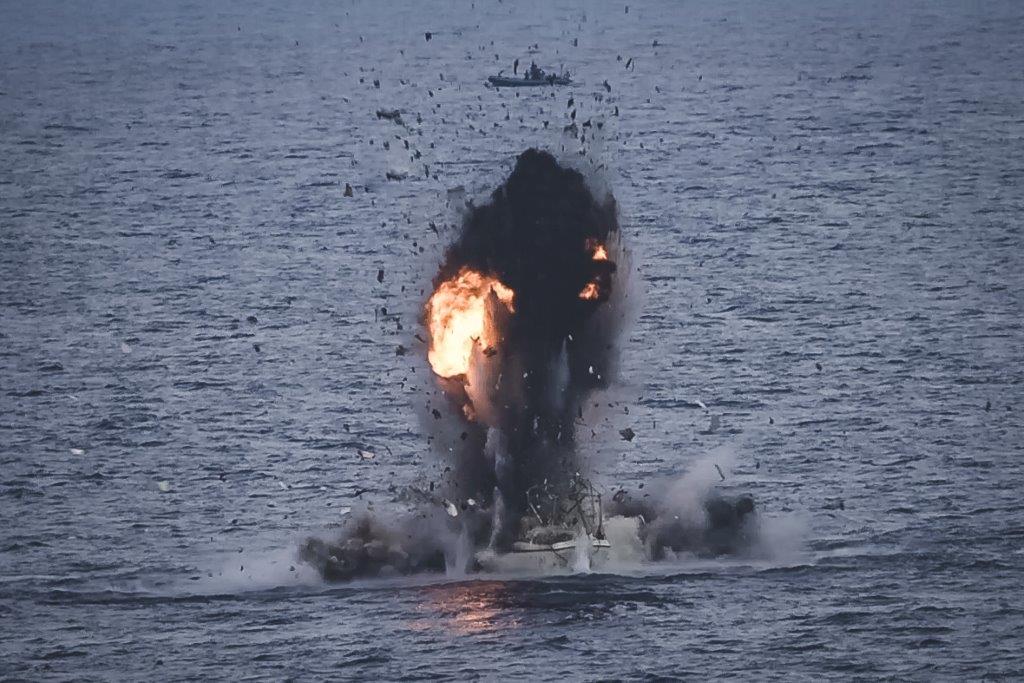 Like “blood diamonds” illegally caught fish from the Indian Ocean should not be sold in Europe. Crime at sea creates instability on land and causes wars. “Prohibit blood fish,” says Andrew Mwangura who knows the Indian Ocean well. As a former sailor, he was coordinator of the Kenyan Seafarers Association for many years. He represented the interests of sailors on the East African coast. “The pirate cartels from ten years ago still exist. The business model is the same, the merchandise has changed,” he says in the Kenyan port of Mombasa. Illegal fishing is one of their criminal activities. “Fish is caught illegally, transferred to other boats and brought to Europe, China and Japan. Ships from all over the world are participating. It is big business.”

According to Mwangura, there are still seven pirate groups operating in Somalia. “They are now in the drug or arms trade. Or they work as consultants for antipirate operations”. So much is happening on that endless sea and only a few know what is going on there. Smuggling sugar and corn, for example, scandals that did shock Kenyans recently. Along the 600 kilometre long Kenyan coast are eight official ports and forty unofficial, meaning illegal, ports used for import.

All pictures by Koert Lindijer Lindijer. The last picture: The boat that attacked a ship was later caught and blown up by the Castilla. Photo Franscisco Gomez Conde public affairs officer Atalanta

Military superpowers try to elbow each other out in Djibouti and China is winning On the island of Mouchas, an hour sailing from the mainland of Djibouti, lie the remains of pirate tombs. They date from the 19th century.... Kenya coast boiling of anger Islamic radicals and a movement which wants indepence for the coast both exploit anger about marginalisation and youth employment. The Kenyan coast is boiling.... Said Samatar, a Somali icon dies Said Samatar, who died last week, explained Somalia. A brilliant scholar he used words like swords and clubs wielded with speed and skill to skewer...