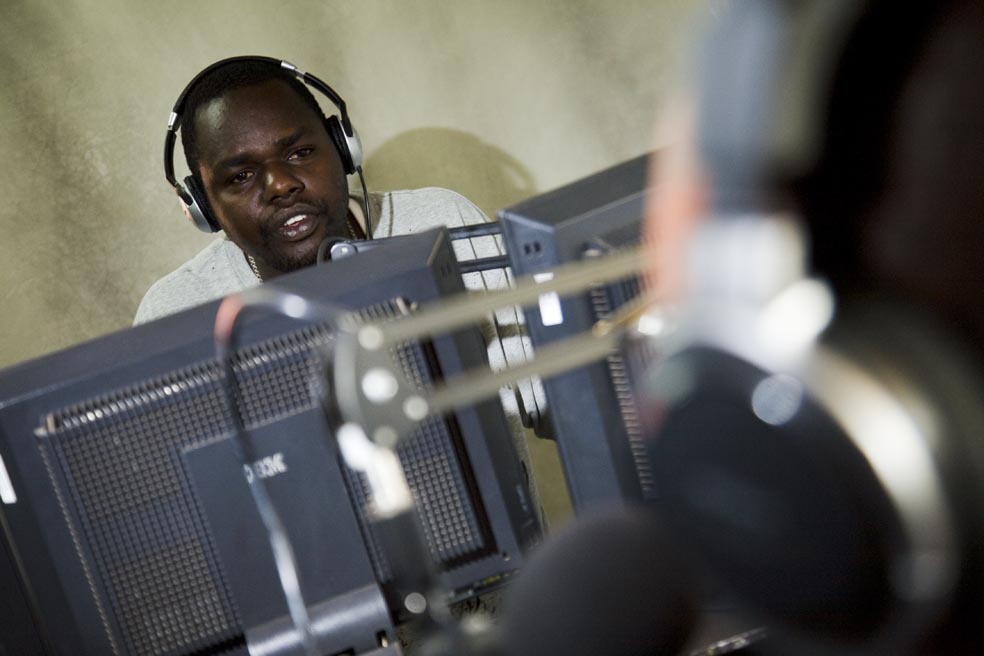 With a new constitution since 2010 and with social media as a new tool for communication, Kenyan politics has been re-energised. But tribes and old political blocks still dominate the political discourse. Will there be space for young and independent candidates in the general election in August? Robert ‘Rowbow’ Ochola is as real as they come; a man from a hood in Nairobi. He is as poor as his voters.

“People are angry”, he says, “They are not happy with the beneficiaries of theft, corruption and shoddy dealings in the government. One day there will be an uprising, an uprising by the poor majority who also want a piece of the cake. Foto: Petterik Wiggers
Mathare, one of the oldest slums in Nairobi.

Ochola was born and raised in a neighbourhood known as Ziwani in the city of Nairobi. “For my parents sending all of us to school was not a walk in the park. There were 12 siblings in my family. At a certain time there were four of us in high school, so a decision had to be made on who was to be given top priority. At one point my brother was sitting for his final exams, so I had to stay at home for a while until my father could afford to pay for my fees. After completing high school I had to wait for another five years before I could further my education. The five years of waiting were the longest five years of my life and I found myself running up and down the neighbourhood with nothing in particular to keep me busy and grounded”.

Were you a law abiding citizen?

“Let’s just say I had to survive and with that in mind I became a ‘broker’. The stuff that was brought for us to sell was not always legal. I could make a profit of let’s say 300 or 100 shillings. I came so close to being a criminal but my personal values and upbringing kept me grounded plus I had dreams to pursue with an alternative vision for myself and my neighbourhood”.

With what you made from your brokerage, did you consider yourself successful amongst your peers?

Ochola laughs: “I was still struggling. The little money I earned with petty crime was just enough to buy the basics such as milk and bread to make sure I lived to see the next day”.

How difficult is it for a young person in the ghetto to stay on the right side of the law?

“Very difficult. They are very vulnerable to crime since they have to eke out a living for themselves. Most of them thirst for the finer things in life so falling into the ‘crime’ trap is very easy. With the lack of employment opportunities for the youth, they end up engaging in crime and other money generating vices so that they can take care of themselves and fit in”

What goes through the mind of a 14 year old boy living in the ghetto?

“How can I make it out of here (the ghetto)? Sadly its only 10 percent who manage to make it out. The successful thug becomes his hero/role model, he throws around money, and he can afford girlfriends, cars, silver chains and expensive gadgets. If you go to his house you find a nice TV set. For a teenager that is his example, that is what he looks up to. On one side he has a father who gets up every morning to look for work as a casual labourer in the busy industrial area, making 250 shilling a day and on the other side he has a thug living the good life. Whom does the teenager lay his hopes on? Of course it’s on the wrong side! A hopeless generation does not have something/someone positive to look up to; it’s like the Wild Wild West”.

But isn’t that a very huge risk they are taking with their lives?

“Look at Kayole. So many young persons have been killed. The notion is that one has to die anyway. So why don’t you get rich or die trying. You either get arrested or killed. You can’t be a thug and live long. Most of them get killed in the second or third year in crime. That why a lot of these gang groups are coming up with fancy names like ‘We don’t recognise death’, or ‘Ready to die’”. 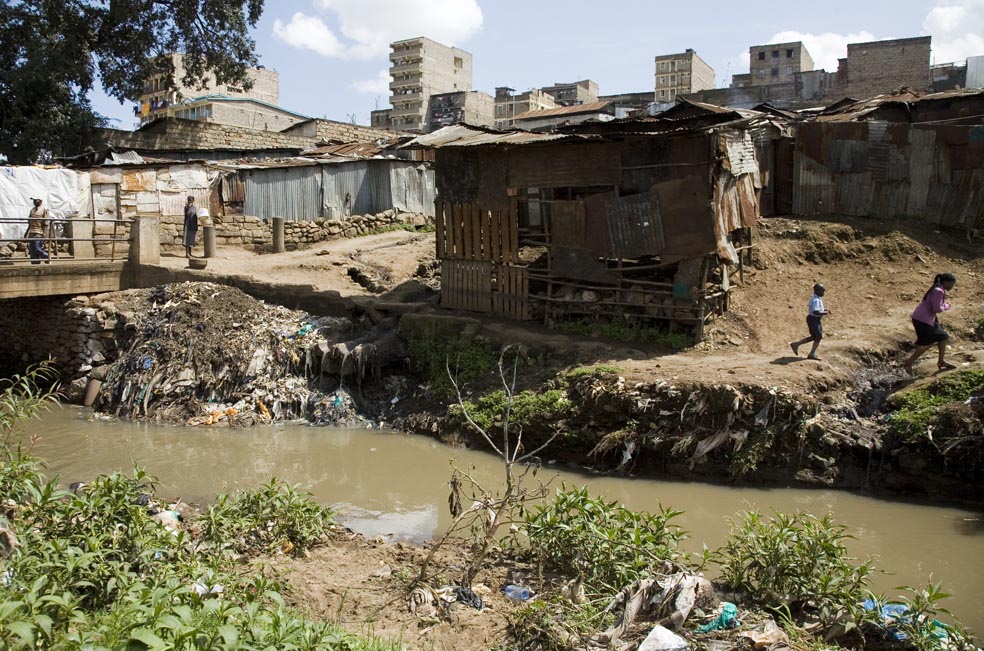 You saw violent extremism gradually gaining popularity in your neighbourhood?

“It all started in 2006. Some of the guys we grew up with started pulling disappearing acts only to hear they were in Somalia. It later came to my realisation that they were recruited to go and fight in the neighbouring country for extremist groups. It is still happening. Recruitment is still there, although some people refuse to accept reality. Extremism is not only pushed via war fare but also though brain fare. More and more people keep on falling prey to radicalization.  It is now happening via social media. It is not being done any more in the open”.

Having worked with the popular youth radio station Ghetto radio as a presenter, Ochola uses his popularity to organise social events, like a major football tournament (Kothbiro). He also conducts workshops which aim to de-radicalise youth, by offering mentorship through himself and other success stories. That experience he now wants to use in politics. He will vie for a seat as a Member of the County Assembly for Ziwani/Kariakor/Gikomba ward in Starehe Constituency, Nairobi County. “We don’t need politicians, we need leaders, and we lack leaders in Kenya. The people we elect make a lot of noise and steal a lot of money. We need people to guide us, people who will engage with us”. 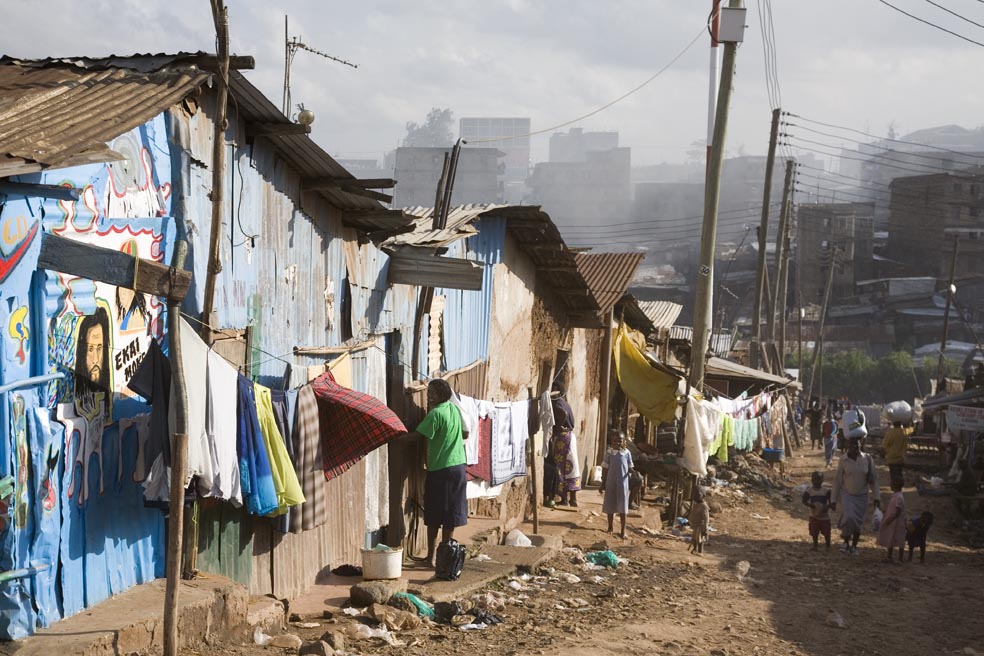 “People are angry”, he says, “They are not happy with the beneficiaries of theft, corruption and shoddy dealings in the government. One day there will be an uprising, an uprising by the poor majority who also want a piece of the cake. Corruption is a major issue in Kenya, even more so after Uhuru Kenyatta was elected president in 2013.

“The gap between the rich and poor has widened”, he says. “Why is that? There are little or no opportunities for the people in our neighbourhoods. Look at all the money which has been looted since 2013. A good example is the National Looting Service”, he says referring to the recent major corruption scandal at the National Youth Service.

“Most of those in government have managed to accumulate their wealth in very dishonest ways thanks to the escalating level of corruption in the country. You just have to take a keen look at the money that has been ‘used’ in building the standard gauge railway.  This is the most expensive railroad in the world. This is what can be termed as ‘daylight robbery’! We are a nation of misplaced priorities. A nation where we have a dual carriage way for 100 cars, and you have a million people who are your electorates going on foot to search for employment opportunities. The difference is visible to everyone; it must change”. Are you not going to be poisoned yourself by politics?

“I have experienced a lot, I have learnt from those experiences, I am a better person because of those experiences. One thing that the majority of the politicians don’t have is empathy. I will not be driven by greed, power , corruption and negative ethnicity .One of my many promises to the people of my ward is that a certain percentage of what I will earn shall go back to the community. Yes, a part of my salary will go to the community. I escaped being a criminal and with my life lessons and experiences I believe I am ready to take on the political giants and still remain true to myself and my people because that’s just, me, that’s just Rowbow!”

The bathroom of Kenya in trouble: will climate change destroy Kenya’s tea? The bathroom of Kenya is in trouble: will climate change destroy is Kenya's tea?... We must not give up on revolutionary optimism in Kenya Introduction: Kenyan former chief justice Willy Mutunga speaks out. “We must not give up on revolutionary optimism”, he warns in this piece. Since a new... Bonoko Bonoko looks young and innocent, but he is hardened and shrewd. He gained his life experience on the streets of the Kenyan capital Nairobi, where... Boko Haram: The root cause of the conflict is ideological The violence by Boko Haram in Nigeria has become endemic. The Nigerian military does not seem to have the capacity to defeat the terror band.... The war against terror in Kenya could turn into a success for al Shabaab The war on illegal immigrants and against terror in Kenya seem to target the Somali community. It could backfire...