When we go to the African continent, we go back to Mother Earth. And that return must be a warm welcome. It can be reflected in a person or a particular situation that will occur just like that, without you foreseeing it. I had that moment in Rogbonko, a village deep in the forest of Sierra Leone. I was there making an audio documentary about the place and its developing projects. They are the initiative from the writer Aminatta Forna and her cousin Morlai Forna, who have their roots in the village. My stay revealed something about myself, as happens in most of my stories.  It is something that I want to share in this writing.  We think we travel to meet new people and other cultures. But underneath all of that, I also agree that we travel to learn more about ourselves.

Rogbonko means literally a place in the forest. And indeed, a five hour drive from Freetown, it is far away from the big city.  It is in the northern part of Sierra Leone, in the Tonkolili district. There lives a community of one thousand people in Rogbonko, of which almost forty percent are children due to a baby-boom that followed the war. Temne is the main language. Some people also speak Krio and English. Rogbonko lies within the three sides of the river. There is a school, a clinic, and a large farmland where rice is grown. There is also a cashew plantation, also one their developing projects. Every week there are two religious services in the village for the majority community of Muslims and the smaller group of Christians. The people appointed their own chief, a very gentle man who has held his position for more than a decade. He leads the village meetings which are also attended by representatives of the elderly and the youngsters. But anyone can join in and have his or her say. 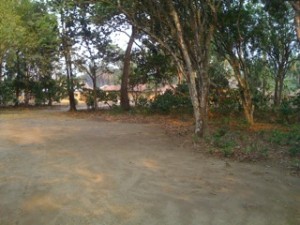 During my stay I had the opportunity to meet the farmers and go with them to their land. We had to cross the river in a boat, reaching the other side after a couple of meters. Children were swimming in the water. There were women going back and forth with food and refreshments for the farmers. Their land is a widespread area where you can only hear the wind blow. Most of the men work with their hands, sometimes using nothing but a hoe or a shovel. It is a lot of labor for just enough food to feed their families. Each year the Season of Plenty switches into the Season of Hunger, referring to the dry and rainy seasons. I was there during the good months. So kids were catching mangoes from the trees and eating them. I joined them and also had sweet mango juice dripping on my arms and legs.

Monkeys also like mangoes, that I know now. When I was swimming in the river with the children, little apes were crossing the water through the branches of the trees, at least a dozen of them. Of course I was as enthusiastic as the kids were as we tried to chase them. Thank God I had forgotten that small crocodiles and snakes also live in that water. Both nobody seemed to be bordered by that. During the day, the river was especially a place where the children would come to play or take a bath. It was very liberating that there was no shame in being naked, even among the older boys. For me it was the first time I could feel comfortable in being topless among teenagers. I didn’t feel sexual. I felt natural. It is one of those romantic pictures about life in a rural area that is actually true. 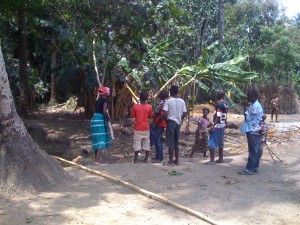 The teens were the ones who often started to ask me questions. Because of their education I could speak English with them. They were especially curious about the places I had been. They want to work or study in the big city, but most of them had never been to Freetown. Some were also dreaming of going abroad. But what could I tell them? How could I make them realise it is not paradise in the West? They would be dropped in this competitive world where people would be prejudiced against them because they are Africans. They would have to deal with high expectations. They would have to work twice as hard to make sure they belonged to the group of successful migrants and not the group of ‘losers’. It would be hypocritical of me to demotivate them. I was expanding my horizon by coming there. Why shouldn’t they have ambitions to do the same? So I told them about ‘the good and the bad’ in the West, as plain as possible.

My interaction with the younger ladies was quite different. They preferred to whisper and giggle when I would pass by. Once a lady put her hand up and asked me for money. It was a joke. But unlike them, I didn’t laugh. I began to understand that those were still the current images of ‘foreign’ people. We would only come to give money and feel good about ourselves. It is not a surprise that these perceptions persist, especially in rural areas like this one. Aminatta Forna explained to me that Sierra Leone had been overflowed by aid-workers who came without proper knowledge, experience or long-term views. People here were so desperate after the war that they accepted any kind of aid. But according to Forna, none of these projects actually worked. It was another waste of money. That part of the interview explained why that lady made that ugly joke. 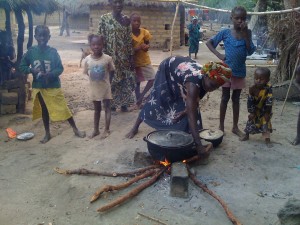 This explanation also said something about what had happened to me the day before. When I was taking a rest outside my cabin, one of the young mothers I met in the village came up with her baby. She seemed really anxious to show me her child, who was only a few months old. Before I knew it, she put the little boy in my arms and I was looking in his big brown eyes. He was breathing heavily while his mother looked at me with some kind of expectation. First I thought she wanted me to bless her child. Later, I understood what kind of blessing she was hoping for when another mother pointed at her child and said to me: ‘Adopt?’ This is the twisted world we live in. A friend of mine once called equality a paradox. We can have conversations as equal human beings, while our life conditions are far from the same.

There were other experiences with the women of the village that bridged the gaps between us. I remember the woman who asked me to take her picture. With pride, she looked straight in the camera, while carrying a bundle of branches on her head. I remember the woman who showed me how she made her family supper and mastered the fire under the stockpot. But there is one lady who really stole my heart. I met her at the well, a typical female meeting place in the centre at the village. We connected immediately without any explanation. Maybe cause we look like each other. At least, that is what people were saying to us. Here, the paradox became clear. The circumstances she and I live in are quite different, but that didn’t strain us. I could recognise myself in the same serious and silent look she had on her face. When we met, it was not even necessary to talk. We just had our moment together while one of the boys took our picture. 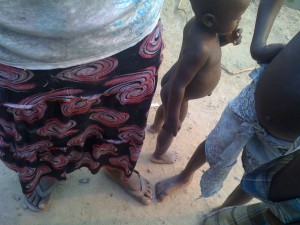 It was like a cue for the surprising moment that would come during the village meeting. I was sitting next to the chief, listening and recording his words in Temne and the responses he got from the people who surrounded this little barré, as they call it. I remember the old woman in the corner who would clap her hands when she approved of something that was said. I remember the bench that was facing me, occupied by the village representatives. After a while the chief was looking at me and said they would like me to say something too. Of course I was overwhelmed by this gesture and too shy to see it coming. I have always been scared of public speeches. But somehow, in one flow, I started talking about my work, my family, my roots and my goals.

They listened and came with a reply. They wished me well on my way back home. They wished my family well and that I would succeed in the things I do. Their words were so sincere that I had tears running down my cheeks. I never realised that their warm welcome meant so much to me. It was my homecoming moment. And to be honest, I think every traveler needs such a moment. They confirmed my return home. Yes, I say home. A welcome like that is also about the awareness that we share the same ancestors. This might come as a surprise because I was brought up in a Western society where there is little knowledge about ancestry. Maybe only the people who were born and continue to live in the same place as their ancestors have the luxury to neglect them. Anyway, it is part of my life, as it is part of many other cultures in the world. That is especially the case on this continent, in this region, in this village. 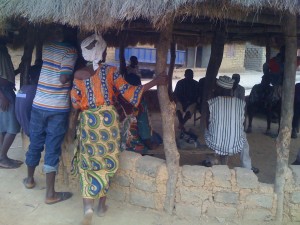 Life in Rogbonko is just what it is, here and now. Surrounded by nature, life becomes clean, enjoyable and vulnerable. Every choice has its consequence. No knowledge about your environment can be a serious threat to your existence. Growth is a day by day process in which you can feel every little change. You are occupied with maintaining your existence. That is your family and neighbours, your crops, your learning about the environment, and your strive to prosper in every aspect. The value of everything is so clear that it immediately connects with all of your basic needs. Rogbonko brought up in me the feeling of motherhood. No, I wasn’t planning on adopting a baby there. Instead, I became aware of my own warm womb. Maybe this is a romantic picture of a rural area in Sierra Leone. But what if it is the other way around? What if the overdeveloped society that we live in is what has become unreal?

Listen here to the audio documentary about the village Rogbonko

Liesbeth Tjon A Meeuw
As a member of a Surinamese family of immigrants, I grew up in the Netherlands. My last name reveals my Chinese roots and I make effort to complete my world-citizenship by integrating my African identity into my work. I write and I make radio. Those are the forms in which I express myself the best. The content is about the African Diaspora in the widest sense of the term. In my stories I try to give meaning to the things that I see in society. I do that with curiosity, passion and with respect for the journalistic codes of ethics. My work takes me to many different places. The result can be a report, an essay, an audiobook or even a fairy tale. If you are interested in my stories, you can visit my blog and find a modest selection of them. View all posts by Liesbeth Tjon A Meeuw →