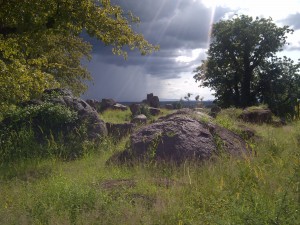 I don’t want to start writing this story. I’ve been stuck in a rebel area in the Nuba Mountains of Sudan, surrounded by hostile government soldiers, without any way to reach the safety of the outside world for several weeks now. I feel smothered by lethargy. Hope leads to hopelessness. Writing takes energy but energy creates expectations. In order to get through this I have to put my feelings on standby.

A new war has broken out in Sudan. In 1955, the black South Sudanese started a rebellion against domination and exploitation by the Arab people of northern Sudan. The 2005 Comprehensive Peace Agreement ended decades of fighting and eventually led to the independence of South Sudan on 9 July 2011. But the CPA didn’t solve Sudan’s fundamental problem: is this an Arab or a black African nation?

The black tribes in the Nuba mountains and neighboring Blue Nile State, as well as in the western region of Darfur, continue to resist marginalization and Arab domination. Civilians are the main target in the Nuba mountains; in order to cover this vicious conflict, I have to be here where it’s happening and so here I am. The resistance is being led by the Sudan People’s Liberation Army–North (SPLA/N).

Everyday, government bombers fly overhead. The Sudanese government is using the same tactics it used during the first war: bomb the civilians in the rebel areas into submission. Tens of thousands of Nuba people have fled into the mountains to escape the bombs.

They can’t do much farming and the blockades around the cities mean that trading has stopped as well. Students don’t go to school because the bombing is indiscriminate. There is no medicine because foreign aid organizations have been prevented from entering the area. A few weeks ago, a pilot took a chance and flew me in. It’s been raining since then and the landing strip is just a mud pool.

There is no way to tell one day from another and sometimes I wonder if the sun will ever shine again. I want to be a cow and just endlessly chew and chew. Watching insects is a way to pass the time; sand flies during the day, mosquitoes in the evening and fleas during the night. Ants bite me anywhere they can and leave nasty red bumps behind. Tonight I’m going to imitate the goats: they climb up a rock-face and then slide down, scraping insects and bites off their hides. I want to scrape away the itching and the pain. 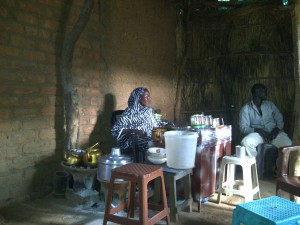 Julud was a mountain village during the first war. After 2002, the thousand inhabitants came down the mountain and created a new village; first there was a little shop, then a market with ten little shops and then more houses. Every day I go and eat my plate of beans at Arafa’s, she’s an attractive young tea lady. She serves beans with sugar or beans with crumbled cookies and sugar. She also has milk with sugar and tea with sugar. People in Sudan like sugar with everything.

Arafa brings Adam some cucumber and sour milk. When fighting broke out in the regional capital Kadugli four months ago, Adam fled to the rebel-held territory. “President Omar al-Bashir’s government wants to wipe out us Nubas,” he says loudly.

Government soldiers ransacked his house in Kadugli; anything that had any value was taken, including the furniture, the roof, the toilet and the kitchen sink. Then the soldiers brought in a bulldozer and flattened his house: Adam has nothing any more. His long political tirade in Arafa’s teahouse betrays a deep hatred of ‘the Arabs’. “It’s a genocide of the Nuba people.”

Adam tells about a bombing that took place yesterday, some ten kilometres up the road. Two women were killed by shrapnel wounds to the stomach. Exhausted rebel fighters stumble into Julud from the front lines; the government troops went on the attack but were intercepted, eight people dead. The SPLA/N commander decides to move me to a safer area, further away from the front line. It’s cheaper in Tima; smugglers have managed to bring goods in from the besieged towns. There are tubes of toothpaste and lollies on the dusty shelves of the little shops and on market day, even a few bottles of fizzy drink. The richest person in the village has a teaching diploma and a television. In the evening, the silence is broken by a police siren screaming on a TV show.

There’s excitement in the air the following evening; the fighters welcome a man, they clap him on the shoulders and embrace him: “SPLA oyé,” they say jubilantly. He escaped from the nearby garrison town of Logowa and, after a two-month trek through hostile territory, finally made it to SPLA/N territory. He laughs, “I’m free here, I’m home.”

Will I ever get away from here? Will this ever end? I haven’t got anything left to read and there’s nothing else to do. I’m even running out of paper to write on. The Nuba Crisis: A Continuing Assault The war in the Nuba Mountains of Sudan continues unabated. A rare eywitness account... Yida refugee camp, February 2013 A harsh life awaits refugees from Sudan, who've made it to the refugee camp of Yida, just across the border in South Sudan... Sudan:Let us treat the root causes   Partial negotiations of the conflicts in the Sudanese crises are not the best tool for peace in the country. Sudan is facing several serious...