Vet Roland Suluku rides every day over scorched earth with the bike owned by his local priest. “The country is getting warmer and poorer,” he says about his working visits to the rural villages of Sierra Leone. “Rain forests almost entirely covered my country thirty years ago, now they are almost nonexistent.”

Up to the mountains and to the horizon, everything is blackened. The landscape shimmers and lacks the sounds of birds and crickets. Having all been put to flames by farmers who practice shifting cultivation.

A trail of empty plastic hard liquor sachets leads to a patch of forest. “Traditional hunters” sighs Suluku. Hunters, farmers, logging companies and diamond prospectors penetrate deeper inside the already depleted rainforests. But nature strikes back as the invaders come out of the forest with dangerous diseases. Viruses such as HIV/AIDS, Chikungunya fever, West Nile fever, Rift Valley Fever, Dengue, and Ebola Marlburg have emerged in the last century from the animals in the woods.

Deforestation is perilous. The famous Frenchman Louis Pasteur(born 1822), the father of microbiology of the microorganisms, predicted it: “The microbes will have the last word.”

A century ago, in West Africa most areas of the coast and further inland were dazzling green. British writer Graham Greene describes travelling in the region in his book “Journey Without Maps” published in 1936 as going through “a green tunnel with no end.” All those woods made him claustrophobic, in panic he began “thinking about things to think about.” Further eastward three hundred years earlier Dutch entrepreneurs plowed for weeks through scarcely penetrable forest in search of gold and slaves.

Where has that ‘untouched’ Africa gone to? Due to population pressure over the past half century the landscape has turned naked and brittle. Almost all the news about the environment today is depressing: melting glaciers on the Ruwenzori, declining forests in southern Madagascar, desertification and conflict in Darfur, fewer trees around the game parks in East Africa, all resulting in a rapid decline in biodiversity.

A century ago, Ghana had a mere 2.5 million inhabitants and enough room for shifting cultivation. Now there are 25 million Ghanaians. Nana Kwaku can remember playing as a little boy in the forest. Now he is one of the old chiefs of the kingdom around Akhumadan in Northern Ghana. “We have called down misfortune on ourselves by allowing the woods to be cut down,” he laments. “Our spirits cannot live on barren plains. It has become hot and dry and our crops will not grow. ” 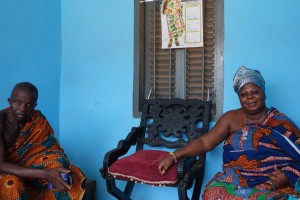 The queen mother of Akhumadan
African politicians now increasingly have to focus on the environmental disaster. At the big environmental conference in Paris last year African countries pledged to reforest a hundred million hectares by 2030. Consequently a follow-up conference was held in Ghana recently.

Present there was the Dutch forester Paul Hol. “Every year in Africa fourteen million hectares of forest disappear. The west of the continent is deforested the fastest. The Congo Basin is nibbled at but because of the poor infrastructure it does not go so fast, because the forest is difficult to reach”, he says. “In Ghana, the woods were rolled back from eight million hectares in 1980 to 1.3 million today. The urgency to create new forests has increased. Only sustainable management and rainforest conservation is no longer enough. “

Paul Hol started a forest project in 2007 called Form Ghana. An hour’s drive north of the Ghanaian city of Kumasi his company planted teak trees over seven thousand hectares. There are plans to double this amount. Can forests bring in money? “Yes,” says Paul Hol, “after fifteen to twenty years investors receive a profit margin of over 10 percent. To make a project sustainable it is essential to ensure cooperation between the  government, private companies and local people.”

“Did you notice that the windscreen of your car does not have smashed insects after your trip from Kumasi”, an employee of the plantation Form Ghana welcomes me. The few remaining original trees at the plantation in Akhumadan rise thirty meters above the planted teak trees only a few meters long. The giant ones look lost but play a small part in restoring biodiversity. But a forest plantation does not make a primeval forest. Planted in straight lines rows of trees with pruned branches do not make a forest but a park. The spirits are gone.