The clouds clinging to the highlands near the town of Murang’a, northeast of the capital Nairobi, obscure the view of the sacred mountains.

In the beginning, when mankind began to populate the earth, God called men from wandering tribes to his place of residence, Mount Kenya. He chose one of them, a Kikuyu, for his obedience and gave him all the fertile land below, with the ravines, the rivers, the forests, the wild animals and everything else.

God pointed to a place full of fig trees in the middle of the land and ordered the Kikuyu to settle there. There he met his wife, Moombi. “All Kikuyu have their origin in this House of Moombi. The Kikuyu are the blessed tribe of Kenya”, explains the guide, Kamau Kibe. 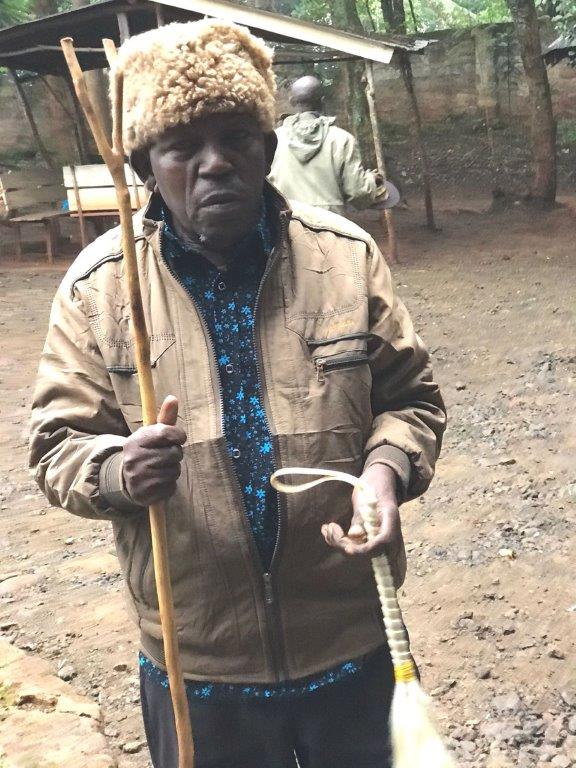 “The tyranny of numbers,” is what analysts in Kenya call the recurring tribal vote in elections. Ethnic groups have become constructs for political mobilization and the outcome can be predicted from their numerical strength. The politician’s tribal constituency passionately conducts electoral competition, which is why the fear of violence looms with every election. But what exactly is a tribe in modernizing Africa?

Kamau put on a hat of sheep’s wool for the tour. In one hand rests a ceremonial stick, in the other a fly whisk. He points in all directions to sacred mountains of the Kikuyu: Mount Kenya, the Aberdares, the Ngong Mountains and the Kilimambogo. I brought my cousin Nick Mwaatha and two other young Kikuyu who are frantically taking notes on their cell phones. “It’s a shame that we Kikuyu like to forget our culture and adopt someone else’s,” says Nick.

The House of Moombi is not a place of pilgrimage; most Kikuyu have never been there. More than the other 42 tribes of Kenya, the Kikuyu exchanged their tribal customs for Christianity. But some chauvinism is no stranger to the Kikuyu either, because they have been dominant in Kenyan politics and economics for a long time.

This advance started at the beginning of the last century, when the current capital Nairobi was still a white enclave. Only the Kikuyu wanted to provide services to the settlers. They became their shit-carriers and emptied the toilet buckets for them, and from this they derived the right to stay with the bosses on their compounds.

Their accommodation allowed Kikuyu politicians to smoothly follow in the footsteps of the departing settlers after independence in 1963. Kenya’s first president, Jomo Kenyatta, gave priority to his Kikuyu and established a bourgeoisie mainly composed of members of his own group.

Each tribe claims divine preference. Preferring the Masai for his obedience, the God living on Mount Kilimanjaro sent from heaven down a leather thong hundreds of cattle, making the herdsmen the owner of all the cows on earth. “It’s a territorial imagination, all those sacred Kikuyu mountains,” grumbles a friend, Lenomboi Lepere of the Maasai-affiliated Samburu, when I mentioned the visit to Moombi’s house. “For our rituals, we build houses whose entrances overlook the Ng’iro or Mount Kenya, mountains in which our God shows His form.” The Ngong Mountains served as the parliament of the Maasai until a century and a half ago; their elders and prophets gathered there to deliberate over drought and pestilence, or they proclaimed war.

The Maasai is committed to its ancient traditions and, like many Kenyans, he glorifies his tribal language, eating habits, music and storytellers. This tribal affiliation determines his culture and thus his identity. In principle, there is nothing wrong with the tribal affiliation and the rich culture that goes with it. The word “tribe” does not refer to primitiveness but to pride, it is not a word to detest but a banner to follow.

Although the word “tribe” is widely and shamelessly spoken about Kenyan tongues, it is a fuzzy concept. Many of the 42 ‘tribes’ in Kenya turn out to be fabrications invented by the settlers. As they took the increasingly scarce farmland, they drove the Africans to these so-called “tribal reserves”. As part of their divide-and-rule policy, the settlers emphasized an ethnic division of the population and “founded” tribes. The “Kalenjin” tribe did not previously exist as a unit, but included several tribal groups. The British colonials merged them and together introduced the concept of pure and strictly defined tribal areas, although in reality Africans lived a much more mixed life. Tribes intermarried and traded with each other. Masai went to live with Kikuyu, Kikuyu with Kamba and Kalenjin and Luo with Baluhya.

But there are indeed fierce rivalries and differences in language and culture between the tribes. In Ethiopia they call it ethnic nationalism, in Kenya it’s called tribalism, in the politically correct world they talk about ethnicity.

Whatever name you give it, this tribal nationalism is an “inconvenient truth,” as Kenyan poet Sitawa Namwalie wrote in her poem “Language of tribe.” Because ethnic nationalism is divisive and an existential threat to virtually every African nation.

It is often considered taboo in intellectual circles. Pan-Africanists slide in their chairs, cough into their fists or look at their cell phones when the subject comes up. With a hint of smug indignation, they say Kenyans have no problem with each other; it is politicians who caused hatred. This was demonstrated by the election violence in 2007 and 2008, which degenerated into tribal conflicts. The Kenyan media then decided no longer to name the tribal origins of rioting young people, but to write about “certain ethnic groups”. But tribal rivalry cannot be eliminated by not reporting on it. Red clay sticks to our shoes as the guide of the House of Moombi leads us through the thick forest past a sacrificial site and the homes of the nine Kikuyu daughters, from whom the nine Kikuyu clans each take their name. He praises my wife’s clan for its beauty. My cousin Nick Maatha is still hanging on his every word. “It saddens me that I didn’t know where I came from,” he says. “Visiting this sacred place makes me proud to be a Kikuyu. There’s nothing wrong with that, is there?”

How fear and violence became part of elections in Kenya Women of the Nandi and the Luo no longer want to wash their clothes together in the River of Lions, the river dividing their tribal... Is Obama Circumcised? Americans Vote! Africa epitomizes poor or non-existent leadership, dictatorship, clinging to power at all cost leaders and general anarchy and chaos before, during and after elections. Need... Kenya elections: Tribal politics lead to violence and bad governance Go into one of the many new shopping halls in Nairobi and you will be amazed how much Kenya has become part of the global... Kenyans vote while the cartels rule Peter Kamau (30) squats in the muddy roadside near the village of Kaharati and searches for an errand, for an opportunity to unload bunches of... Tyranny of a Super Tribe Kenya is a Country that claims it fears God and always attributes goodness and also tragedies to the Almighty e.g. a person dies of consuming...