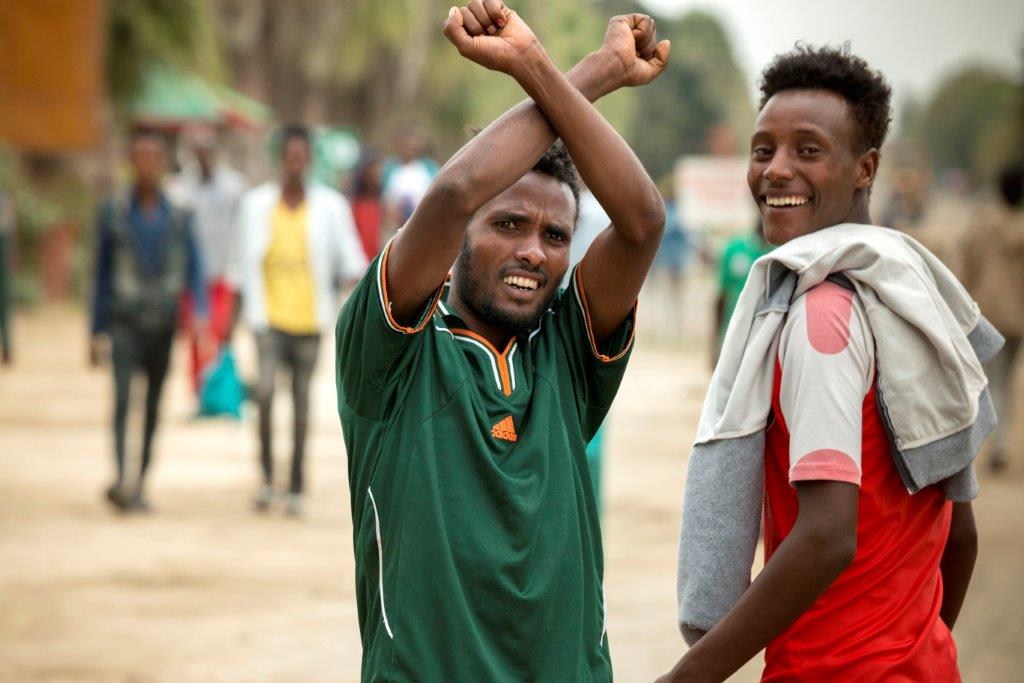 Julius Owino (40) raps a tune at the start of his morning show on Ghetto Radio, pushes the slider and plays his song Unbwogable, which translates as ‘We will not bend, we can’t be cheated’. Julius lost an election last year for a seat in the city council of the Kenyan capital Nairobi, but will try again next time. “If I am elected, I remain radical, honest and sincere. I will not allow myself to be bribed, like older politicians”, he assures.

Julius is not the only one of the youth who come in rushing and want to go into politics. There seems to be a revolution in the air, as a result of the population growth in Africa. On the continent, in the cities and the countryside, almost everyone is under thirty years old. Older people over fifty are a small minority. In Uganda, 75 to 80 percent of the population is younger than 30, in Kenya between 70 and 75 percent. Africa is the youngest continent.

Referring to that demographic majority, young people demand their share in politics. In the pursuit of their rights, they use sports, music and other arts. Julius Owino symbolizes that phenomenon, just like the Ugandan musician and MP Bobi Wine (36) does. In their view the politicians of today are old pricks, who are not representative of the demographic trend. Elsewhere in Africa in recent years musicians made themselves known as well – as champions for young people, with a political message. In Senegal in 2012, hip hop artist Fou Malade and the duo Keur Gui joined hands with activists and contributed to the downfall of President Wade. In Burkina Faso reggae artist Sams’K Le Jah and the rapper Serge Bambara helped in 2014 with a popular uprising. Also in Kenya and Tanzania young people use their artistic talents to go into politics. In Liberia last year the former football player George Weah was elected president.

The growing generation conflict became painfully clear recently with the news about the torture of Robert Kyagulanyi, better known in his home country Uganda under his stage name Bobi Wine. The musical activist, the self-proclaimed “king of the ghetto”, who was elected MP last year, challenges incumbent President Yoweri Museveni (74). All candidates who had the support of Bobi Wine during midterm elections won. That happened again last month and after a small incident at an election meeting, the Ugandan president had him arrested. Bobi Wine was tortured in the state prison. Hundreds of young people demonstrated, not only in Uganda but also in neighbouring Kenya. Bobi Wine has now become a hero in Africa. Faced with a wave of disgust about Bobi Wine’s treatment, Museveni sputters like an old grandfather who tries to discipline his disobedient grandchildren. Bobi Wine, who was in particular tortured around his genitals, went to America for medical treatment and came back on the 20th of September.

Julius Owino had performed with Bobi Wine in Kampala, the capital of Uganda, earlier this year with his band Gidi Gidi Maji Maji. “Bobi Wine is more of a social activist than a musician,” he says. “Whether inside or outside the ghetto, everyone knows him. He is leading the poor. He is a warrior using the power of music.” 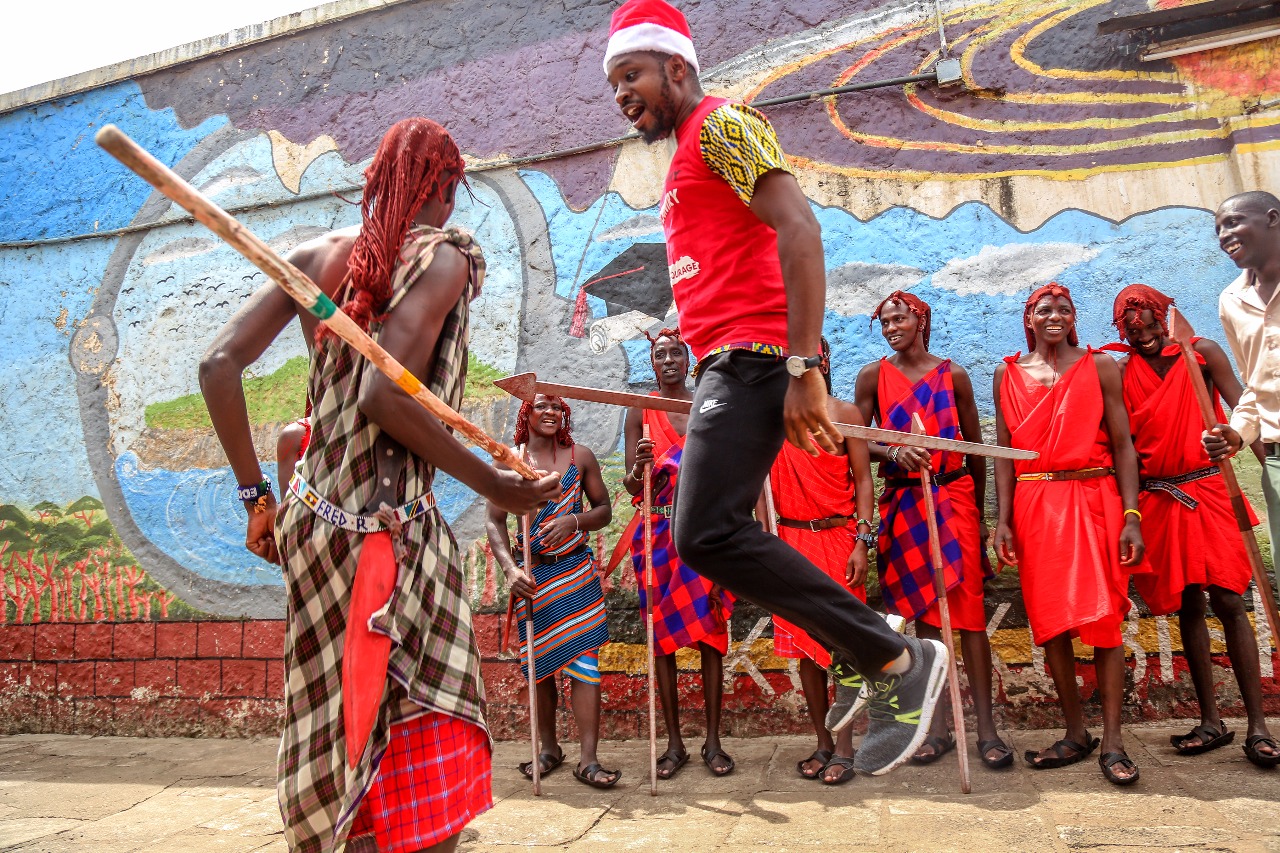 The Kenyan photographer Bonifice Mwangi (35) also uses his creativity for political activism and participated in parliamentary elections last year. He uses satire, as in a demonstration in 2013, when he released pigs around the parliament. On their pink backs he had put the names of the MPs, ‘the Mpigs’. “I cannot sing,” he laughs, “that’s why I do it my way. But every revolution needs music, music is the fuel, music helps people to march. Long live Bobi Wine.”

The revolution of the youth also has its attributes, like the red beret. That hat was a symbol of the late president Thomas Sankara(who also could sing), as well as by Julius Malema(37) of the Economic Freedom Fighters in South Africa and now by Bobi Wine.

In the old Africa, having many children was a blessing and not a burden. True to tradition, children at the table kept their mouths shut when parents spoke, they had no right to an opinion as long as the elderly had not given theirs. Nonchalantly, Mwangi gestures that old habit to the dustbin. “Young people should never keep their mouth shut,” he snorts. “Because the elderly no longer speak on our behalf, they do not understand us and do not represent us. We are with many more than the elderly and use social media to organize ourselves. Never again will we be polite.”

The youth are struggling because the economy cannot absorb the population explosion. That is why for youthful politicians such as Bobi Wine, youth unemployment is a major issue. “We want to be heard, but what can you do without work? Without money, it is not possible to get a position in politics,” says Patricia Mutheu (31), member of the Nairobi City Council. “The older generation has ruined it for us, they just want to fill their pockets. We young people must create an entirely different kind of politics, without corruption, without that decadent striving for luxury. Do you know what the first thing that our president does when a young person is elected in parliament? He gives him an expensive car. That way you get corrupted.”

For all young people it is difficult to penetrate into politics; but in a not very emancipated society it is even more complicated for young women. Patricia is from Mathare Valley, one of the largest ghettos in Nairobi. She is wearing a tight suit. “Certainly, my popularity has to do with my appearance, but also because I am a good football player,” she laughs. She played in the most popular team of the slums. “As a woman you have to work ten times as hard. I show that it is possible. And I did it without a sugar daddy,” she says, referring to the phenomenon of financial sponsors of old age, in exchange for sex and other entertainment.

“Oh, of course, I receive continuous offers of sex in exchange for financial support,” says Patricia. “I reject them all. It is possible to do it without sex, if you make it clear that it is your merit and not your body.”

Apart from the rumbling of the rather annoying ‘grandfather’ Museveni, Bobi Wine faces a heavy political battle. Stories about the torture of opposition politicians are all too familiar in Uganda. For Bobi Wine, it seems a separate treatment was reserved. The pop idol – who also creates sexual excitement among his fans – was not accidentally tortured by members of Museveni’s elite troops at his genitals, they pulled it and crushed his testicles.

“A musician’s penis is his second microphone”, explains Fidel, a social activist in Mathare Valley. “His extra value lies between his legs. The torturers of Museveni had understood that well, they tried to make him an invalid there on purpose.” According to Bonifice Mwangi men attribute great value to their penis, it can function as a power device. “It’s a typical tactic of a dictator to crush someone’s balls,” he says, “Museveni is trying to break Bobi Wine. But our ideas are not like penises, they cannot be crushed.”

The revolution that consumed so many of us By Dawit Mesfin Book review DELIVERANCE: A Tale of Colliding Passions and the Muse of Forgiveness A Historical Novel by Bereket Habte Selassie The story...