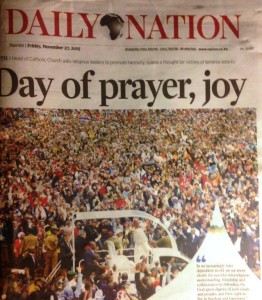 A papal serenity hang in the air. Nairobi became inundated with women with white caps and men with white collars: hundreds of thousands of faithful flocked to the capital for the pope. A usual cynical view of the opportunist Kenyan politics was briefly replaced by a moral worldview. President Uhuru Kenyatta declared in the name of the Holy Father a new war on corruption. The pope watched his solemn declaration, as did the two former presidents Moi and Kibaki, who both were embroiled in major corruption scandals.

Kenyans easily go on their knees and cry out for God for earthly political affairs.

Supporters of Uhuru’s ally, Vice President William Ruto, recently organized weekly prayer services for a divine intervention to save the Vice President of “the neocolonial ICC”, the International Criminal Court. Ruto must defend himself in The Hague against charges of crimes against humanity committed during the election violence in 2007/8. Dozens of parliamentarians, tribal and religious leaders and other supporters of William Ruto raised their hands to heaven every week. Against the backdrop of a poster Ruto full of Bible verses.

“An unbridled form of contempt for the ICC”, called Chile Eboe-Osuji, a judge at the ICC, these prayer meetings. Which must cease immediately, he says. President Uhuru Kenyatta hit back: “No judge can deter Kenyans to pray.”

These prayer meetings fit, says the ICC, into a pattern of harassment. In Kenya one witness involved in the case of Ruto was killed and at least two are missing. The ICC issued arrest warrants against some Kenyans for the bribery of six witnesses for the prosecution against Ruto.

Kenyan and later ICC investigators began work immediately after the election violence in 2008. Uhuru Kenyatta, who was deputy prime minister, could count on the cooperation of the Kenyan secret service. But not Ruto, who was still in the camp of the opposition. So probably much evidence against Ruto was handed over to the investigators while potential evidence against Kenyatta was pilfered. The case against Kenyatta has stopped “for lack of evidence” earlier this year.

Prominent human rights lawyer Gibson Kamau Kuria called in a newspaper column the prayers for Ruto contempt of the ICC by Kenya. “The prayers must stop immediately, because they damage the law in Kenya and our international reputation,” wrote the lawyer.

For now, the papal visit, with all it’s blessings and prayers, has polished up Kenya’s international standing .

Judges are trying to save Africa from lawlessness and greedy politicians It is cheaper to buy a judge than to hire a lawyer. That saying has been true since Kenya’s independence in 1963, but that is... Kenya and the ICC: “Don’t be vague, go to The Hague,” (but send Bush and Blair too) This is a crucial moment for the International Criminal Court. If it drops the ball or the UN Security Council (UNSC) kicks the Kenyan cases... The Case of Kenya and the ICC: Diplomatic Earthquake The fact is that the Kenyan elite – like many in Africa – simply do not recognise that they are subject to the law. Politically... Son ignores family and hangs out with Neighbours… Kenya’s greatest, most famous and popular expatriate, American President Barack Obama is on his first major African tour. Fortunately or unfortunately depending on which section... Kenyans vote while the cartels rule Peter Kamau (30) squats in the muddy roadside near the village of Kaharati and searches for an errand, for an opportunity to unload bunches of...