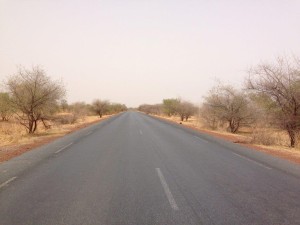 The road from Bamako to Kayes

The minarets plastered with azure colored tiles tower above the baobab trees on the desolate savanna. In this region in the west of Mali signs of prosperity are dissonant with the image of an otherwise poor country. Besides the beautiful mosques, stone houses and shops with corrugated iron roofs catch the eyes in contrast to the traditional mud dwellings with thatched roofs.  A school, a clinic, a small water treatment plant – all these are fruits of the labor of migrants in African and European countries.”Welcome to the port of departure for migration,” says Mayor Sega Sissoko in the dusty village of Ségala in the western region of Kayes. “Migration is for us a religion. If Europe does not allow migration it means that you do not grant us a life. ”

Migrants from Ségala transfer money to their families, and in consultation with the village elders  they invest in social and infrastructure projects. “Our young people cherish just one desire: migrate” The adviser to the mayor has also recently left for France in search of work. 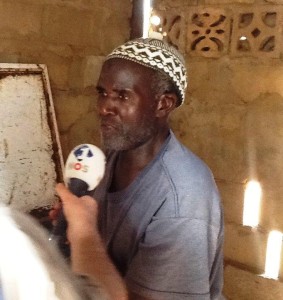 From far and wide mopeds strapped with coolers ride on and off at the house of Moussa Fofana in Ségala. On his property are two second hand Mercedes cars and a satellite dish which he uses to watch French television.  After 44 years working as a steward on French express trains he has now retired to his hometown. He bought with his little capital a generator and fridges with which he began to produce ice water. “I rebelled against poverty. When I left in 1971, the Malian government banned migration, but you will always find a way out. I bought a Ghanaian passport and chose the adventure.”
Why did he go to France? He pulls the woolen hat which he brought from Paris over his face and says, “My father served in the colonial army. At home we were always talking about France. It was a logical choice. ”

Hardly any country in black Africa produces as many migrants as Mali. The government estimates that of the approximately sixteen million Malians four million live and work abroad, mostly in Ivory Coast and other African countries, and many in France. The majority come from the western Kayes region. The migration to France started after the Second World War when the Malians were welcome to contribute to the required labour force in reconstruction of Europe.

In the Malian capital Bamako sits the office of CIGEM, a think tank for migration, led by Abdoulaye Konaté. “There has always existed migration from Mali, for both economic and cultural reasons. It is a necessity for us. But migration to Europe has become a problem”, he says.
Konaté condemns the politicization of the issue of migration in Europe. “You Europeans only consider the question of how to stop the flow. You will not achieve much with military means. If you close the doors, you only create more problems because our young people will not stop seeking for a better future. Many already think: “It’s Europe or death.” Migration begins with an individual decision at the village level. That is where you must take action. ”

On the way to the next village trucks carrying cattle destined for slaughter in Bamako roar past. Migrants do invest in cattle. Many children walk with shoes on, men and women are dressed in beautiful fabrics. High masts for mobile telephone traffic can be seen everywhere. This region was the first in Mali to be introduced to the mobile phone network, because migrants want to call home. A few years back there was already a direct air link from the regional capital of Kayes to Paris, simply because of the migrants. 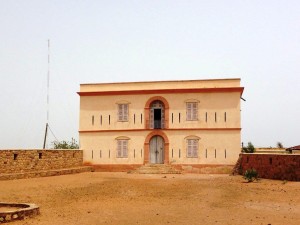 Along the Senegal River beyond the city of Kayes there is first the  picturesque old French fort of Medine, and then in the village of Sabouciré a monument to the king Niamodi Sissoko. He stirs the war drum, surrounded by warriors with spears bows and arrow. In 1878 the soldiers of the king had fought against the first French invaders who under Colonel Reybaud started the conquest of Mali from the current Senegal. It was a bloody battle: 150 fighters and thirteen French soldiers died. Who could by then have thought that 136 years later, a large number of the citizens of Sissoko’s kingdom would come to live in France.  Migrating seems to be in the genes of Malians. According to tradition, the Malian king Aboubakri II in 1312 had already made a vain attempt to discover America across the great water.

Across the River Senegal Mousa Konaté is lazing under a tall mango tree.  “I have slept in the Pauluskerk in Rotterdam( a free place for asylum seekers) when I no longer had any work in Spain, and had come to the Netherlands,” he says. For sixteen years he did odd jobs in agriculture in Spain, until the emerging economic crisis made him increasingly feel unwelcome. He did not like it there. “There is a lot of racism. When you ask Spaniards for the way many will look the other way. If you walk through a street, suddenly you see all the entrance doors close. No, I never had the intention to stay in Europe. ”
He earned 800 Euros per month, out of which he transferred 300 to his home village. He built a stone house on an island near Sabouciré, but he did not invest in any business like Fofana did with his ice making. “I did not have enough money left. Villagers think after my return that I’m rich, but other than buy cola nuts for the elderly I cannot afford anything.”

Was his migration then a failure? He looks surprised. “No of course not. In all these years, I did feed my family, did I not?”, he says indignantly. “I have always found it strange that you Europeans do not want to spend more money on your family.” 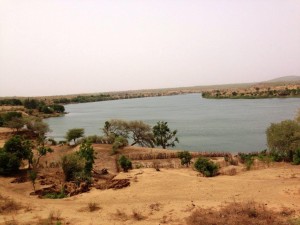 Horny donkeys run braying through the narrow streets of shops built with migrant money. Women spread peanuts on the ground and crack open the fruit of the baobab tree. Kids play leapfrog. In the shade of a tall mango tree Mousa Koume, the old village chief who has only three teeth left in his upper jaw, addresses a village meeting. “My village has a thousand inhabitants. In the past three years a hundred of young people moved away.”  Everyone knows that the journey through the Sahara and the Mediterranean Sea is a dangerous one, but that does not in any way deter villagers from undertaking the journey.  “We are naturally adventurous,” says another. “Our problem of poverty is greater than the fear of a journey full of risks to Europe.”
Some things remain secret and are unsaid at the village meeting.  Abdoulaye Konaté, director of the think tank CIGEM in Bamako, had told me that families put a lot of pressure on their sons to make the journey to Europe, and have to collect a lot of money for that purpose. That is the paradox. Poor villagers sell their meagre belongings in order to raise money for a family member to emigrate.  Sometimes they have to come up with thousands of dollars to pay the smugglers fees.

The village head claims not to have knowledge of such social pressure. “Everyone goes in secret; I do not know who wants to leave. When anyone asks my advice, I say: ‘Do not choose the illegal route, which is much too dangerous. ”

Another unspoken issue is the impact of the migration on social life. A man who stays away for years is not there to produce children with his wife. So his brother gets the right to do that for him. The oldsters under the tree remain silent. Until the village chief Mousa Koume says, “For this special permission is needed from the families.”

Will there ever be an end to migration? “The Malian government is weak, it can barely pay the salaries of its civil servants, let alone try to stop the smugglers,” says the director of CIGEM in Bamako.

Despite advances made from using “migrant” money, Kayes remains a poor region. The government seems to play a marginal role in the development process and the Malians have no confidence that their rulers will help improve their lot.  In 1962 the government had built a school in the village with mud and straw, but this has long since collapsed. And thanks now to the migrants, it is only through their money that children are still able to receive education in a stone building.

“We need our children to develop our country,” said Konaté Aboulaye in Bamako. “It is in our interests to regulate migration.” He advocates for legal migration on a contract basis. And when migrants return, they have to use their skills in their village. “If you manage migration well, everyone can benefit from it, in Africa and Europe.”

Migration now seems like a never ending chain. Mousa who slept in the Pauluskerk in Rotterdam came to Europe because his brother, who was already there, had transferred money for the crossing. Once in Europe, Mousa in turn transferred money to his son who now bakes bread in Libya. Fanana, of the ice making enterprise, used his money to send one son to Congo where he works in a pastry shop, and his other son went to Equatorial Guinea to be a driver.

Do the villagers understand that some people in Europe are sick of migrants? The village chief with the three remaining teeth nods his head. “But you must understand that without migrants we would not have a school or clinic. Everyone prefers to stay in the place where he was born, but we cannot stop our young people from leaving. ”

The oldies stand up with difficulty from their cross-legged position to say goodbye.  A boy comes to inquire if I know of any work in Europe. “Last week I was informed that my best friend drowned in the Mediterranean,” he says. “Now it’s my turn to try.” 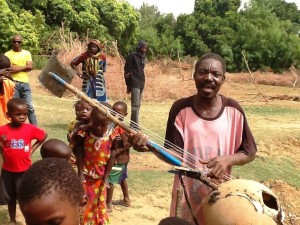 The village singer of Sabouciré

Youchaou Traoré contributed to this story

Mali: If the music dies… Mali finds itself in a political paralysis. A rebellion, an islamist uprising, a coup-d'etat: within mere months a seemingly stable country collapses under unresolved issues.... Mali conflicts undermine economic growth Horses, cars, donkey carts, motorbikes and pedestrians compete with one another over the limited space on the narrow quay of Mopti. Market stalls, lining the... From Mungo Park to the UN invasion of Mali “Hello mate,” writes Matt in an email. “Welcome! You can come back to the Sleeping Camel. I’ve decided to stay open. Because the UN has... Touareg, scapegoats of Mali’s misery Mohamed Moctar is packing his belongings. There is not much is his room besides a sleeping mat, a blanket, a small sound system, a teapot,... Conservative islam is on the rise in poor Mali The mosquitoes in the car do not observe Ramadan and eagerly attack when we drive away from the Malian capital Bamako in the early morning....