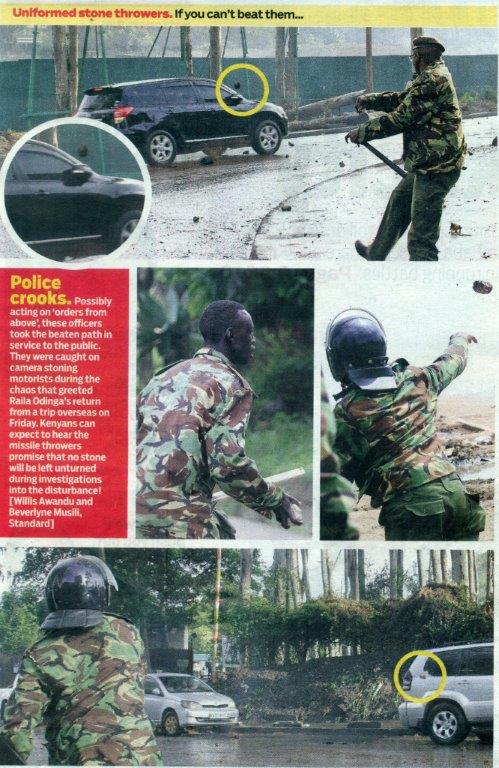 When policemen become rioters. This picture in the Kenyan Standard of the 20th of November shows it all.

On that day the Supreme court declined two petitions to nullify the 26th of October repeat elections, won by sitting president Uhuru Kenyatta with 98 percent of the vote. The opposition under Raila Odinga refused to participate.

The electoral scene is most likely now going to switch from the court room to the streets: Jubilations in the case of Kenyatta’s supporters, demo’s in opposition areas.

Violence got dirtier this weekend. First, several people died when Odinga was welcomed at the airport by his supporters. His supporters that day also allegedly attacked cars owned by Kikuyu’s, seen as supporters of Kenyatta. As a revenge, presumably members of the Mungigi Kikuyu sect attacked Luo supporters of Odinga in a slum Saturday night.

With this rapid deterioration violence may get out of hand. And going by these pictures, the policy seems not to be neutral anymore.

We need to stop worshipping Mandela and start emulating him We need to stop worshipping Mandela and start emulating him... Will elections in Kenya be the road to hell again, or a new beginning? President Mwai Kibaki leaves with a $200,000 golden handshake, but what kind of political settlement will he leave in his wake? Everyone is strapped in... The pope’s first visit to Africa. Kenyans easily go on their knees A papal serenity hang in the air. Nairobi became inundated with women with white caps and men with white collars: hundreds of thousands of faithful... Son ignores family and hangs out with Neighbours… Kenya’s greatest, most famous and popular expatriate, American President Barack Obama is on his first major African tour. Fortunately or unfortunately depending on which section... How fear and violence became part of elections in Kenya Women of the Nandi and the Luo no longer want to wash their clothes together in the River of Lions, the river dividing their tribal...